I have not yet carried out a complete comparison of the entries in Chess Competitions 1824-1970 by Gino Di Felice, Olomouc 2013, with Betts' Bibliography but I suspect that this would reveal a large number of additional publications. The majority would relate to minor and/or local events from around the world and it is not surprising that Betts missed many of these with the tools at his disposal, while it is also a wonder that Di Felice managed to track down so many items for his bibliography. However, Di Felice also missed a number of tournament publications and three of the items below are absent from Chess Competitions.

Report of the Second Annual gathering of the Northumberland and Durham Chess Association, held at North Shields...1867,  Newcastle-upon-Tyne 1868. 58p.

This publication includes a history of the organisation of the Ohio Chess Association, the Constitution, details of the first convention and tournament, round by round results of the tournament which was run on the knockout system (a decision later regretted), and 7 games. 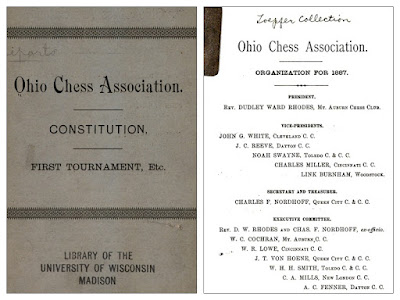 Source: John Rather Chess List 81-A, item 3. Not in Di Felice's Chess Competitions.

Aside from the well known tournament books on the Sixth American Chess Congress, by Morgan and Steinitz, Di Felice's Chess Competitions lists four additional English publications not recorded in Betts. Two of these are pre-tournament programmes which Betts specifically excluded, but the other two, although issued before the tournament, are both of some importance and interest. Di Felice's source in each case was von der Lasa'a catalogue: Sammlung von Schriften über das Schachspiel, Wiesbaden 1896.

To the Subscribers of the proposed American Chess Congress, and to American Chess-Players generally, compiled by James A. Russell, Baltimore 1887. 14p.

Russell was very much against the appointment of Steinitz as editor of the proposed tournament book, on account of the "vulgar and offensive language" used by Steinitz as editor of The International Chess Magazine.  Russell appealed to subscribers and American chess-players generally to boycott the book, he also asked for his own subscription to be returned but this was refused.

This pamphlet includes copies of correspondence between Russell and Steinitz and others regarding this matter. It also includes articles from magazines denouncing Steinitz's editorial style.

Availabilty: Several US libraries have this item as well as libraries in Madrid and Montreal, but it is not in KB or CPL. Digitized edition at hathitrust.org 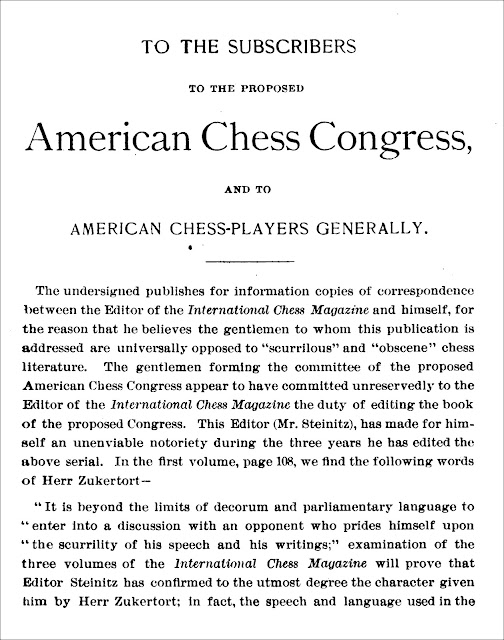 The committee firstly emphasises the importance of international chess competition, then presents its proposals for the Sixth American Chess Congress, followed by a five page appeal for subscribers to the book of the tournament to be edited by Steinitz, and issued in a strictly limited edition at the price of $10. 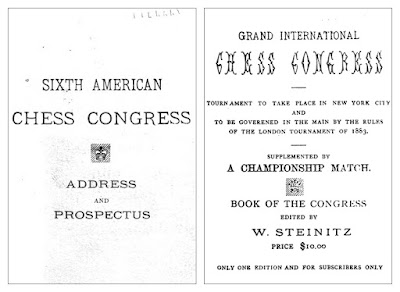 The tournament was won by  J.W. Showalter after a play-off game with  W.H.K. Pollock. The seven player all-play-all would have produced 21 games plus the play-off making a total of 22 games, however the title states that 26 games are included in this publication.

No further details or availabilty found. This has to be regarded as a provisional entry in view of the lack of any further information on this publication.

The magnificent Staats-Zeitung cup was commisioned by Oswald Ottendorfer and presented to the New York Chess Association in 1890 to be competed for annually. The Manhattan Chess Club, represented by Major Hanham won the inaugural contest in 1891.

Posted by Michael Clapham at 12:28