Rare early chess books are out of reach for most collectors, however, exact replicas of some important works have been produced in recent years and these are much more accessible. 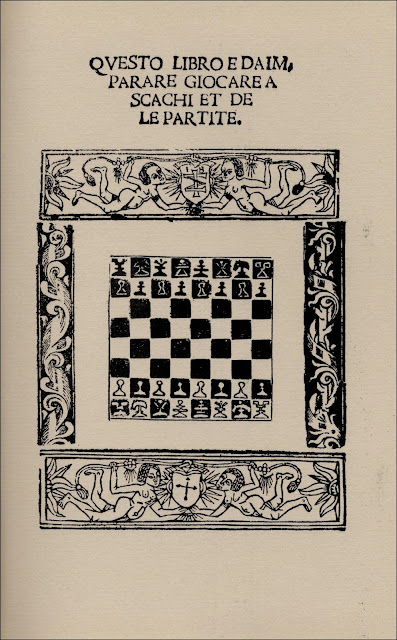 A facsimile of the first edition of Damiano was published by Miland Publishers of Nieuwkoop in 1967 in an edition of 500 copies. Although the title page, Preface by Dr. M. Euwe and the Colophon are all in English, this book is not recorded in Betts's Bibliography (1850 to 1968). 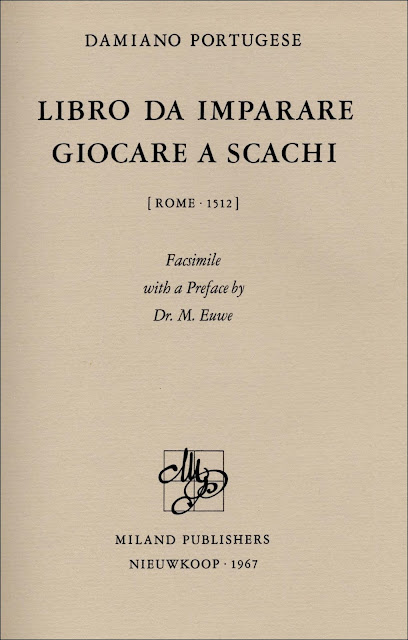 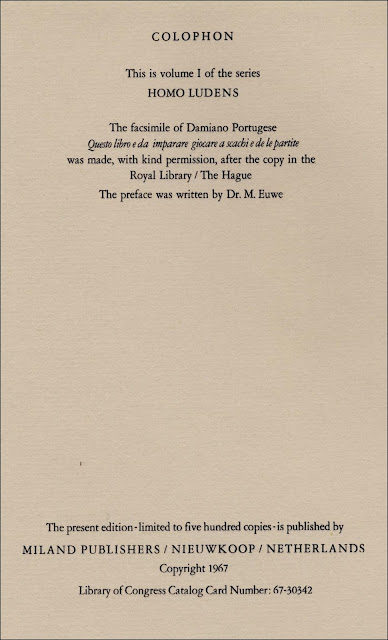 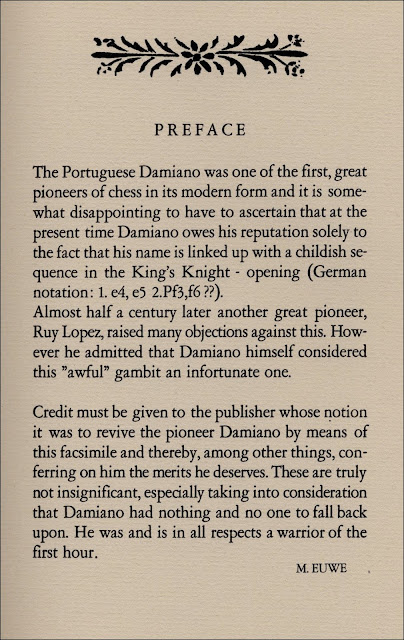 This reprint was produced from the copy in the Royal Library at The Hague but both the half title and title page, erroneously, give the title as Libro da imparare giocare a scachi, which was the title for the third edition onwards. 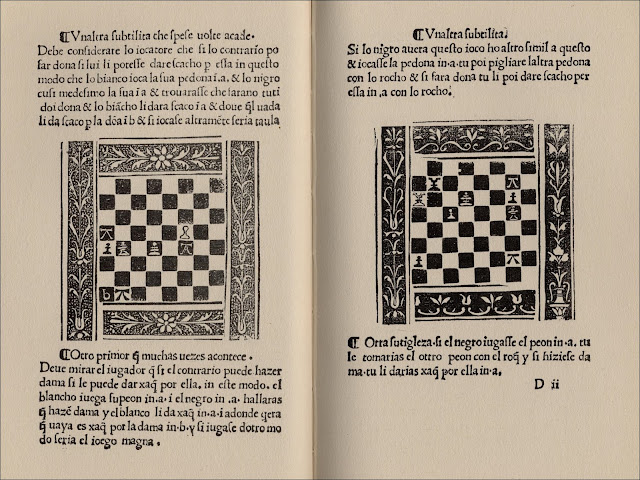 The recognised first edition of Damiano, dated 1512, has 62 leaves and includes 92 fine woodcut chessboard illustrations.  The final leaf includes the words Nouiter Impressum (Latin for New Impression) which has led to speculation that there may have been an earlier edition. This matter was discussed, but unresolved, in The British Chess Magazine in 1906 and 1907 with extensive contributions by Ross Pinsent. 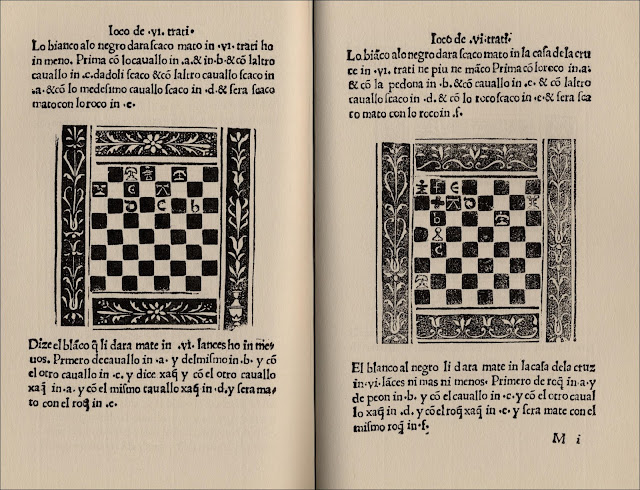 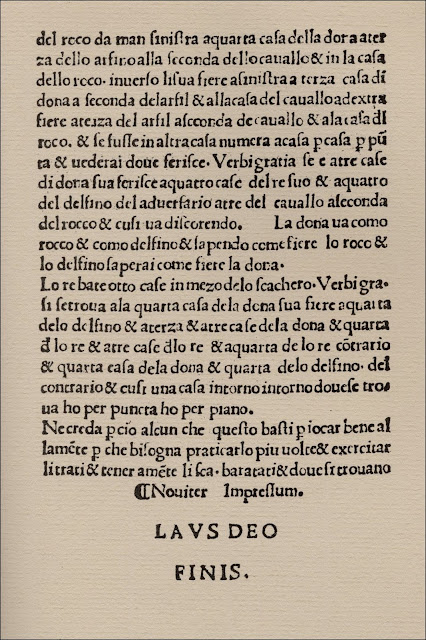 Antonius van der Linde stated, in his Geschichte und Literatur des Schachspiels, Erster Band, page 340, that only three copies of the 1512 edition were known, viz., in the British Museum library, Athenaeum Library, Philadelphia, and The Hague. This was repeated in a number of later publications, including The British Chess Magazine for 1906, page 232, following which J. G. White wrote to the BCM, (1906 pages 423 - 427), claiming a fourth copy in his own collection and adding details of copies known to him of later editions, briefly: 1518 edition, three copies; 1524 edition, two copies; fourth undated edition, one copy; 1618 pirated edition, no copies known.

Further examples of the extremely rare first edition have since been discovered but there are probably less that ten copies in existence. 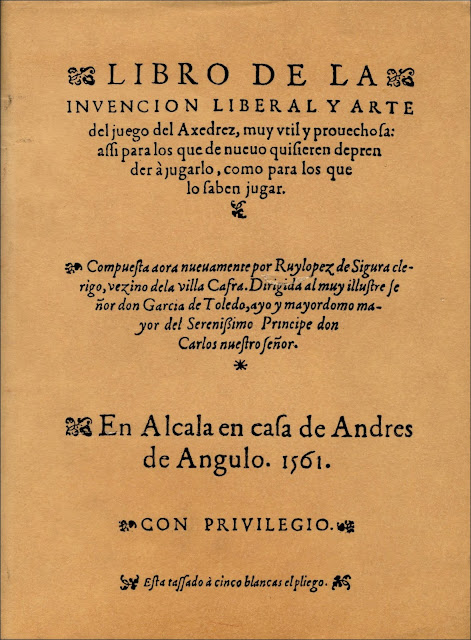 The first edition of Lopez's famous work has 8 unnumbered leaves and 150 numbered leaves. The book is divided into four parts and 85 chapters. There are no chessboard illustrations but most chapters begin with historiated initials.

A small colophon indicates that this reprint was published by Librerias Paris-Valencia S.L. in 2001, but there is no other introductory information. 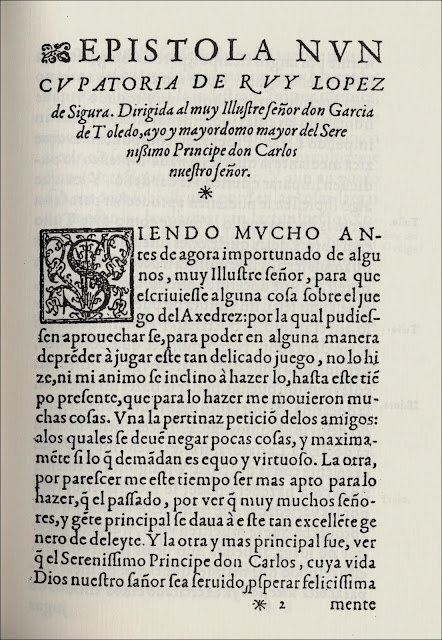 The original Spanish edition of Ruy Lopez was translated into various languages beginning with an imperfect Italian translation by Tarsia, published in Venice in 1584 and from this version Gustavus Selenus, i.e. Augustus, Duke of Brunswick- Lüneberg, produced his Schach-oder König-Spiel in Leipzig, 1616.  Selenus' book, a folio of 495 pages, was highly criticised by van der Linde in his Geschichte und Literatur des Schachspiels, Berlin 1874, Erster Band page 350, and was described by J. A. Leon as "perhaps the most tedious work on chess extant" in the first of his series Old Masters of Modern Chess in The British Chess Magazine 1894 page 396. The most attractive feature of Selenus' book is the number of fine specimens of early German copper-plating.

** The Works of Gianutio, and Gustavus Selenus, on the Game of Chess, London 1817.


The famous game of Chesse-play, by Arthur Saul, London 1614. 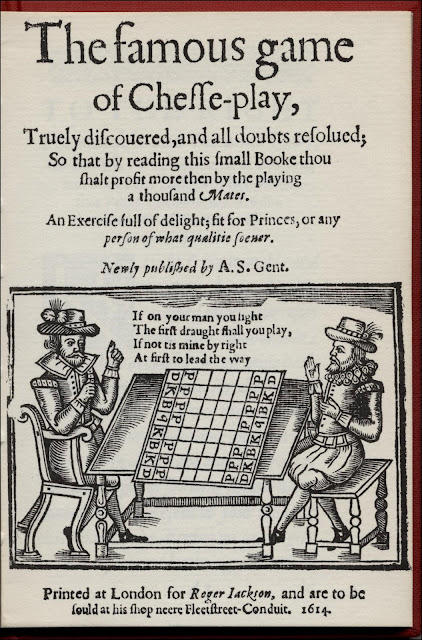 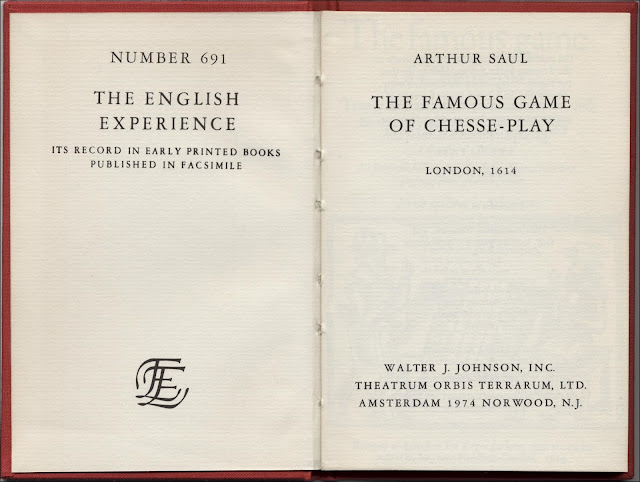 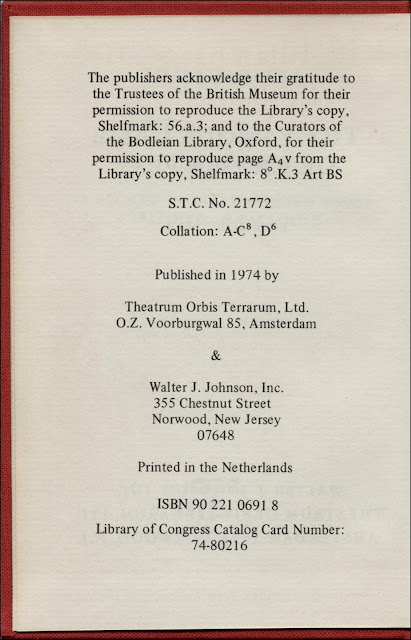 Saul's small volume of thirty unnumbered leaves was the first original chess book published in English and his book was republished in 1618, a year after his death, with additions by Joseph Barbier. Five further editions, all by Barbier, appeared between 1640 and 1680. Only six copies of the first edition of 1614 are known, four in institutional libraries, and two in private hands. The most recent copy to surface was sold in a provincial auction in England in 2006 for £9,000. 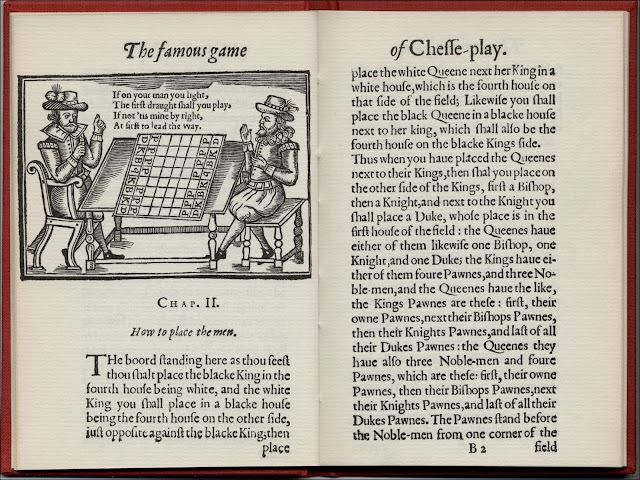 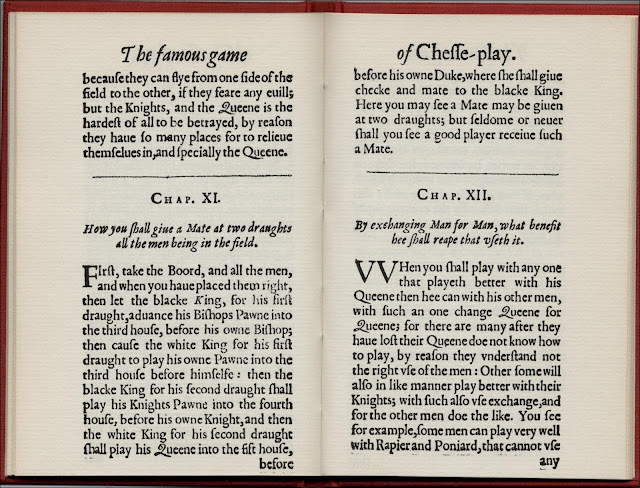 The copy in the Cleveland Public Library and at least one other copy have a variant title page as shown on the left below: 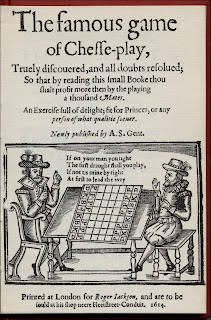 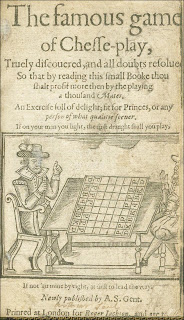 The cumbersome notation in this book runs as follows:

"Let the white King for his first draught advance his owne Pawne into the fourth house of his owne file", or as we would say; e4. 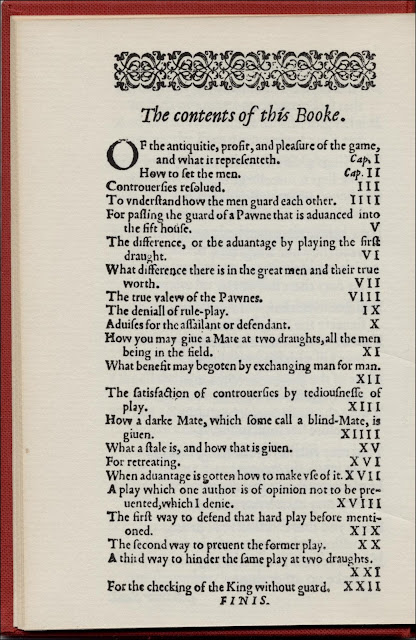 Posted by Michael Clapham at 23:29 No comments: