Notes on the End-Game by C. E. C. Tattersall

Section 22 of Betts' Chess Bibliography covers specific types of the end-game and has just three entries:

22-1 Analysis of the Chess Ending, King and Queen against King and Rook, by Euclid (Alfred Crosskill), London 1895. 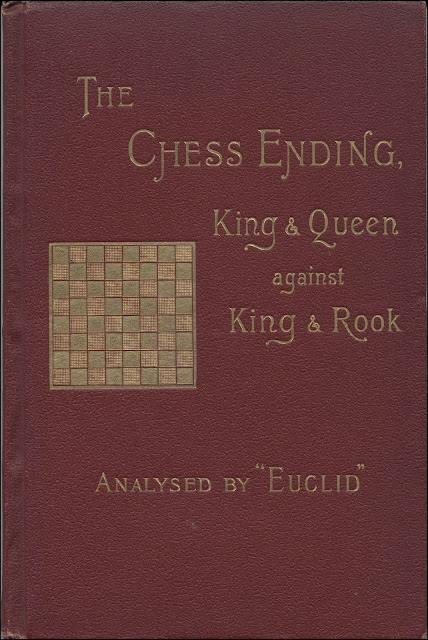 22-3 Collection of Chess Studies, by A. A. Troitzky, Leeds 1937, which includes a 61 page supplement on the theory of the end-game of two knights against pawns. 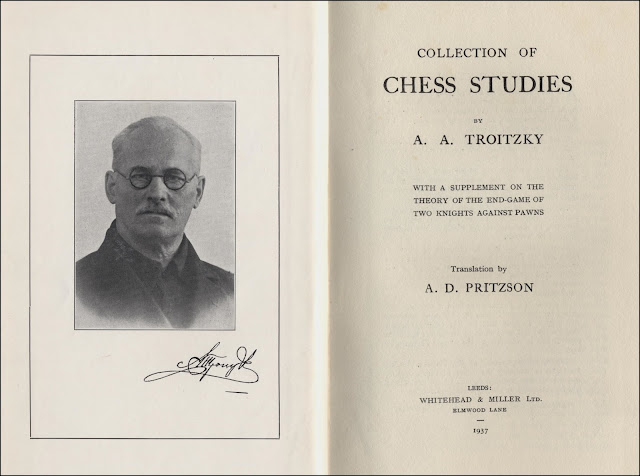 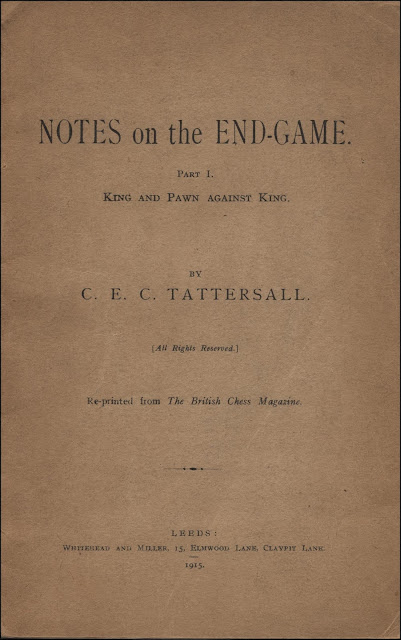 Tattersall's work is a small pamphlet of 24 pages, re-printed from The British Chess Magazine  (April and May 1915),  in which he tackles this seemingly simple end-game in a very unusual manner, with the aim of calculating the mathematical probability of any legal position of K+p v K being a win or draw with best play.

Pages 4 to 14 explain in great detail the methods of play for both sides in K+p v K endings, with the help of many useful diagrams. 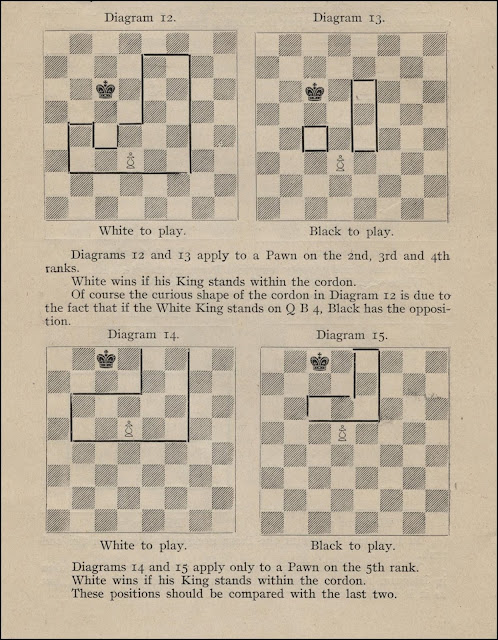 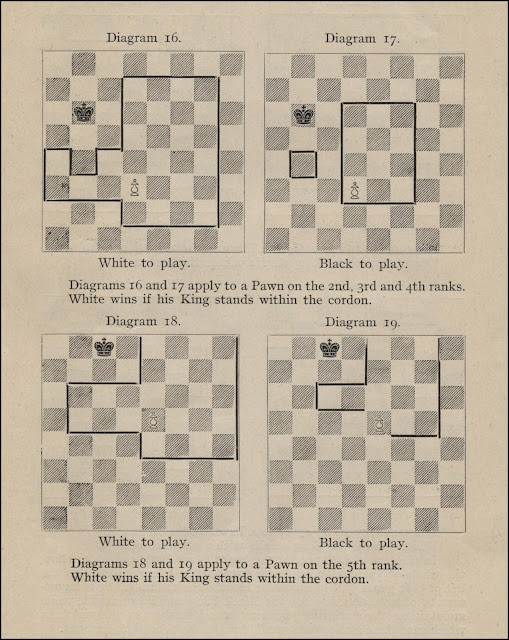 On pages 15 to 24 Tattersall moves on to calculate the chances of a forced win or draw for any random legal position of K+p v K. For convenience the author has called the stronger force White and, using some clever methodology and straight forward arithmetic, he calculates that there are 330,576 such legal positions, of which White wins 76.47% with the move, but only 58.35% if Black moves first.  Black's chances of drawing nearly double with the move. 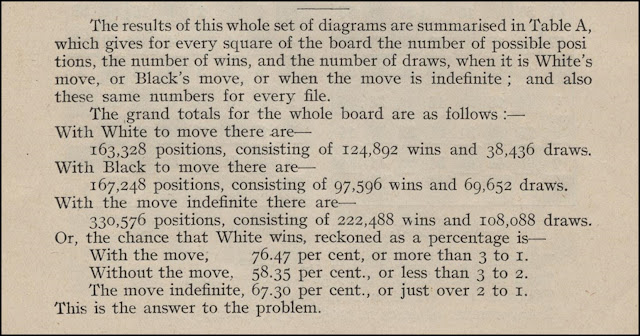 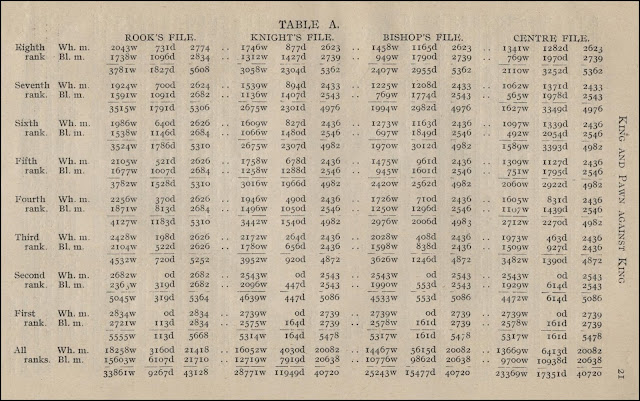 Tattersall then breaks down his analysis to show the chances of a win for various positions of the Black king, and various positions of the White pawn, with some interesting, but generally predictable, results. Black's best drawing chances arise when his king is on the 6th or 7th ranks of the centre files, and White's winning chances increase the further forward his pawn starts.

Furthermore, a White pawn on the second rank is better situated than one on the third rank, unless it is a rook's pawn, and a pawn on the knight's file is slightly more advantageous than a pawn on any other file.

Tattersall's calculations and statistics are fascinating to some but leave others cold, and perhaps the latter prevailed as no additional pamphlets in this series appeared, despite the hopes expressed in his Preface that others would follow dealing with further aspects of the end-game. 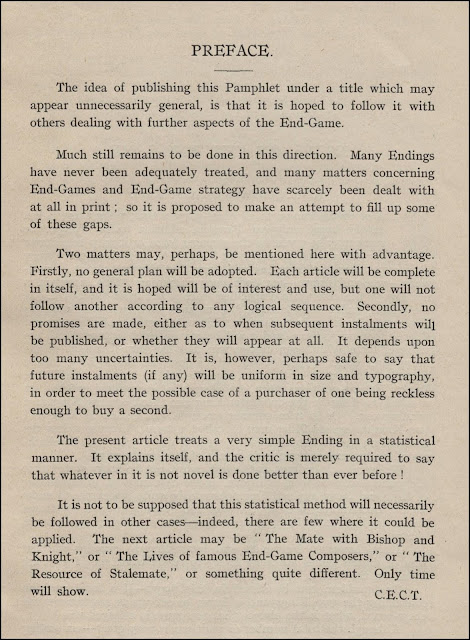 Tattersall was a leading end-game expert of the period and this little known pamphlet was published four years after his well known two volume work A Thousand End-Games, Leeds 1910 and 1911. He was also an authority on fine carpets and wrote a number of books on the subject. 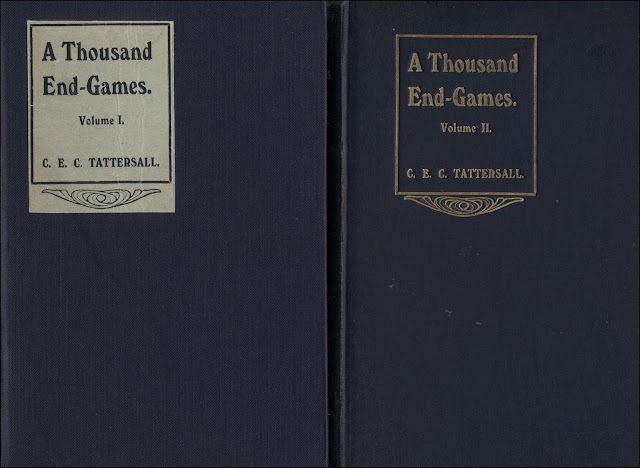 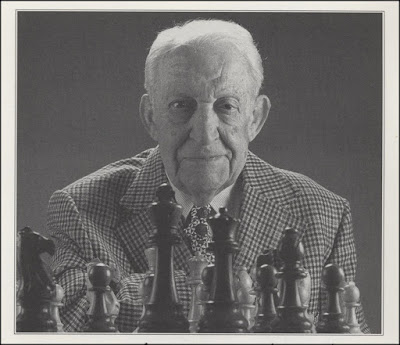 George Koltanowski, the prolific chess author and columnist, has many books to his credit (or debit) from 1927 onwards and had a 51 year spell as editor of the daily chess column in the San Francisco Chronicle. His writings were sometimes inaccurate and unreliable, and he certainly took a bashing in the Chess Notes feature article Koltanowski, mainly in respect of his later works.
His initial involvement in chess literature was with the Belgian chess magazine Het Schaakleven, first issued in October 1923 and lasting for around six months; then with the new series of that magazine which re-launched in 1931. In October 1932 he started his own periodical The Chess World: International Chess Review. The magazine was published in Antwerp, Belgium where Koltanowski was born in 1903, of Polish parentage. Interestingly the magazine was published in English, with the odd item in Dutch, and algebraic notation was used for the majority of the games. The magazines were printed in the attractive Art Deco style of the period.

Although not specifically named as editor in the first issue, Koltanowski is clearly named on the front cover of all other issues and it is curious that he is not mentioned in the entry for this magazine in Belgian chess publications; an annotated bibliography, Antwerp 2011 or the Corrigenda et Addenda issued in 2016. 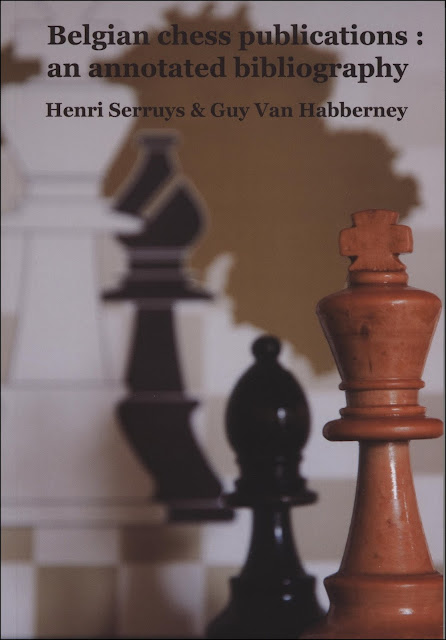 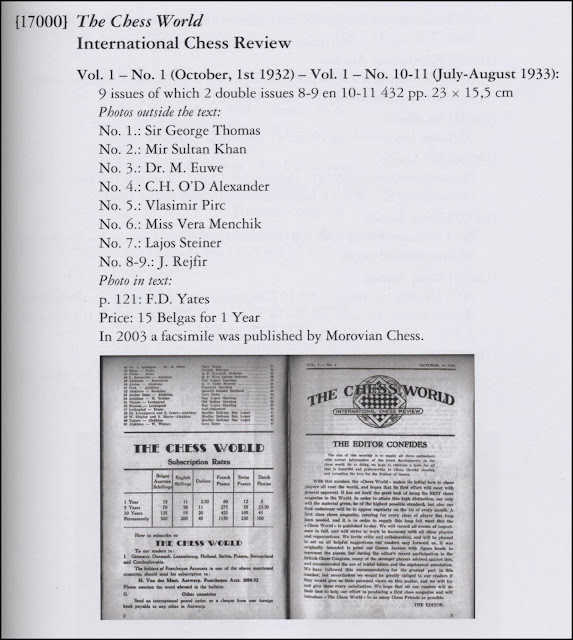 Koltanowski had ambitious plans and, like many similar enterprises, he aimed to supply the "long felt want" for a first class chess magazine catering for players of all abilities. The editor aspired to produce the best chess magazine in the world and to deliver this punctually on the 1st of every month. 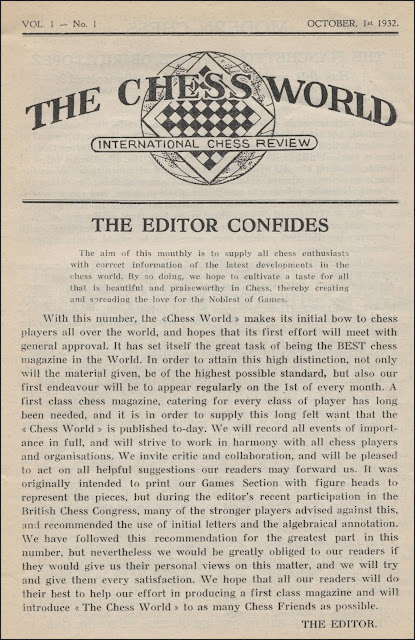 The publishers offered optimistic 5 year, 10 year, and even lifetime subscription rates but, as Timothy Harding notes on page 121 of his recent book British Chess Literature to 1914: "The history of chess magazines in general...shows much enthusiasm but often little staying power", and, no doubt partly due to the difficult financial climate of The Depression, The Chess World folded after eleven months during which only nine issues appeared, the last two being double numbers.

Nevertheless a considerable amount of interesting material was packed into the 48 pages of each magazine. This included a total of 500 games, plus reports, from the leading tournaments and matches of the time, problem and end-game sections, correspondence chess, articles on the openings, news, book reviews and some lively correspondence.

Occasional special articles by, and about, leading chess-players also appeared including: Chess... Past, Present and Future, by Rudolf Spielmann in issue No.1: 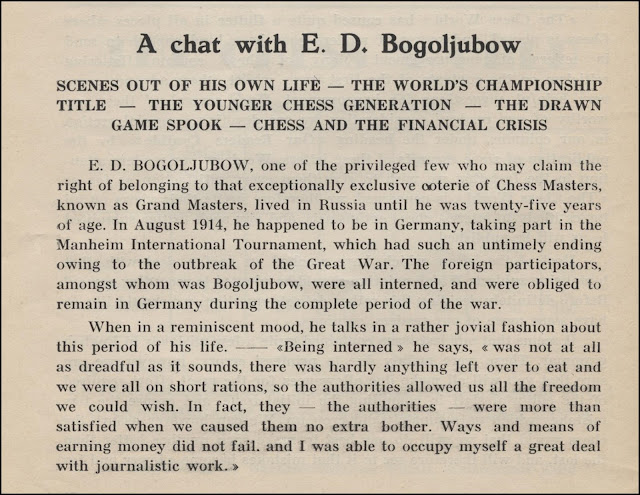 An appraisal of Capablanca's chess career, in No. 3; and Max Euwe on the achievements and style of Alekhine, in No. 4. Here is the final paragraph of the five page Capablanca article: 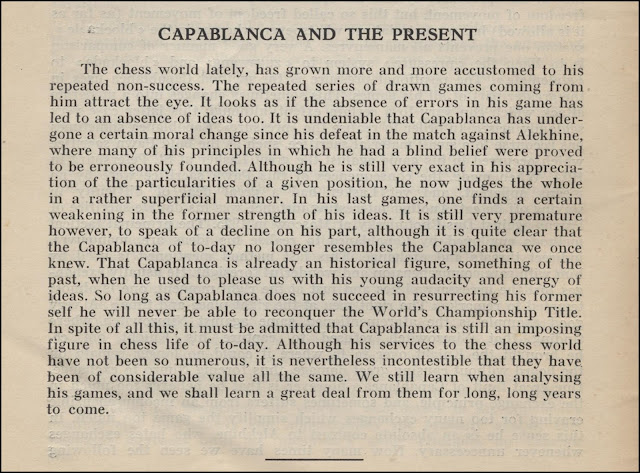 Issue No. 5 was a Special Hastings Number with the editor claiming that this was practically a tournament book on the 1932/33 Hastings International Congress. This number included a report by W. Winter: A Bird's eye view of the Hastings Congress, and 39 games from the Premier Tournament won by Flohr ahead of Pirc, Steiner and Sultan Khan. The only other book on this tournament was an E. G. R. Cordingley Limited Edition of just 30 copies. 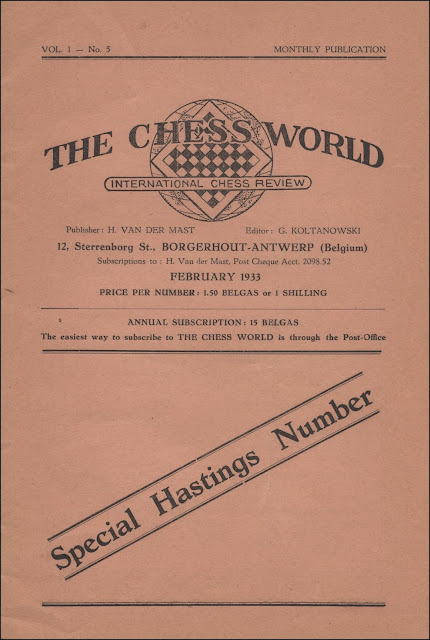 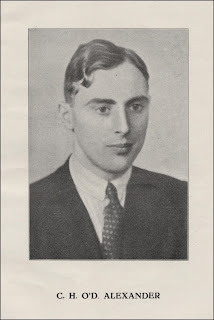 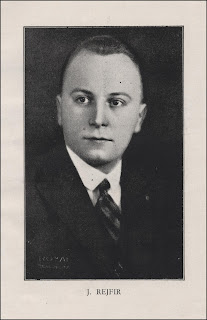 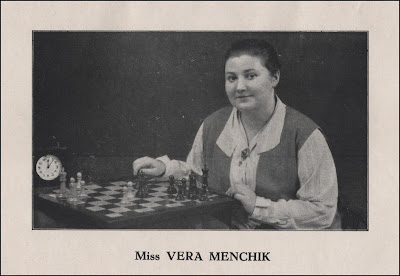 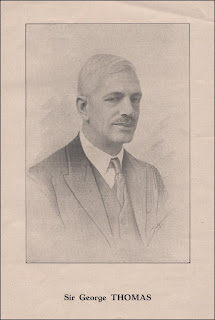 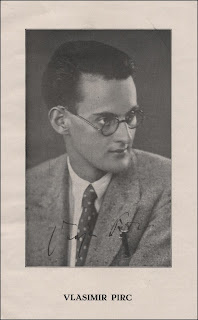 Signs of the gathering clouds appeared with the double issue for May and June 1933 which lacked the usual editorial and included an apology from the publisher promising to catch up with news and games in future numbers. The long term subscriptions were no longer offered. The final issue for July-August 1933 was a bumper number with 64 pages and 120 games but there was no editorial, or publisher's apology, no feature portrait, or reader's letters.  There was also no mention that this would be the last copy. 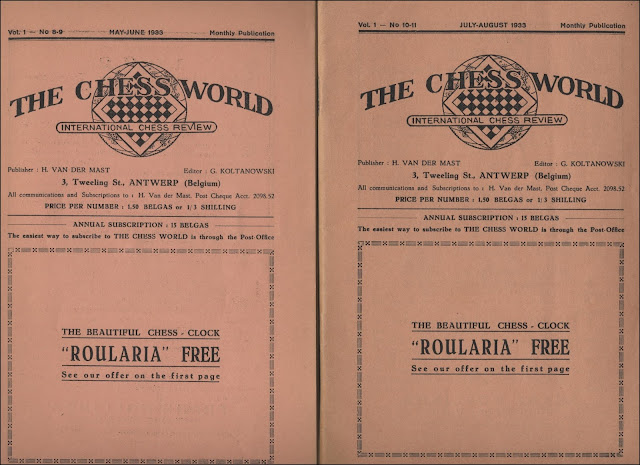 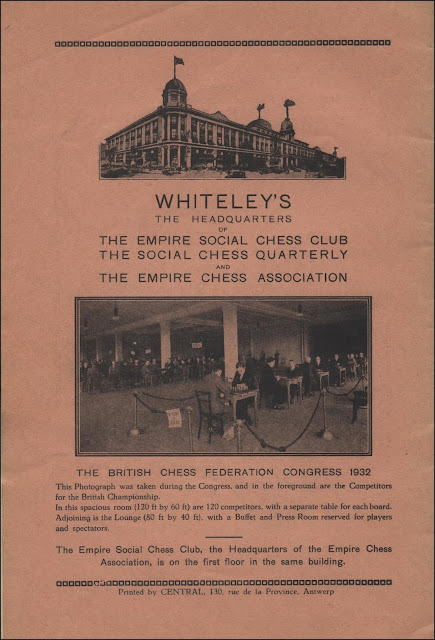 Original copies of this magazine are quite scarce but a facsimile edition was published by Moravian Chess in 2003.