Another book featuring a single game

Back in January 2016 I gave details of a few chess books featuring a single game and here is another: 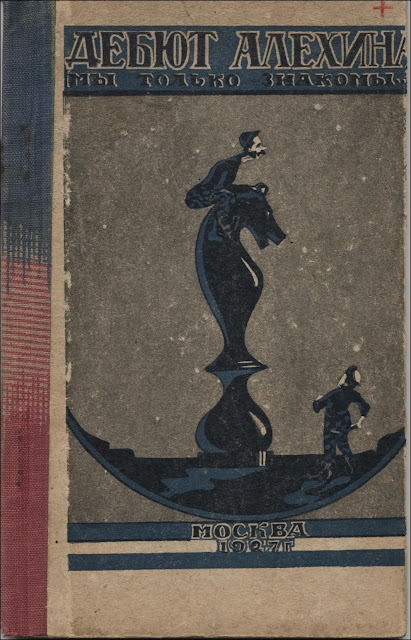 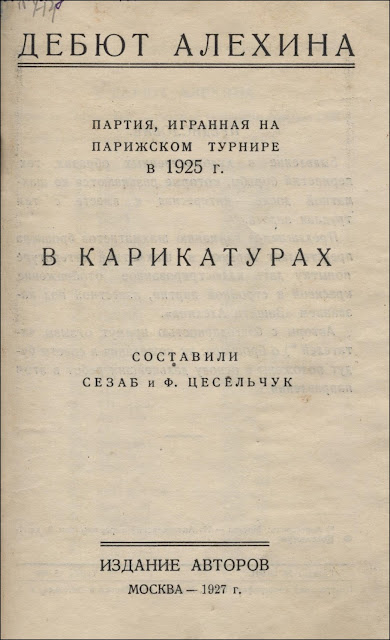 This little 16 page book covers the Alekhine Defence game played between Znosko-Borovsky and Alekhine at the Paris tournament of 1925. The moves are given with an expressive illustration and a caption. 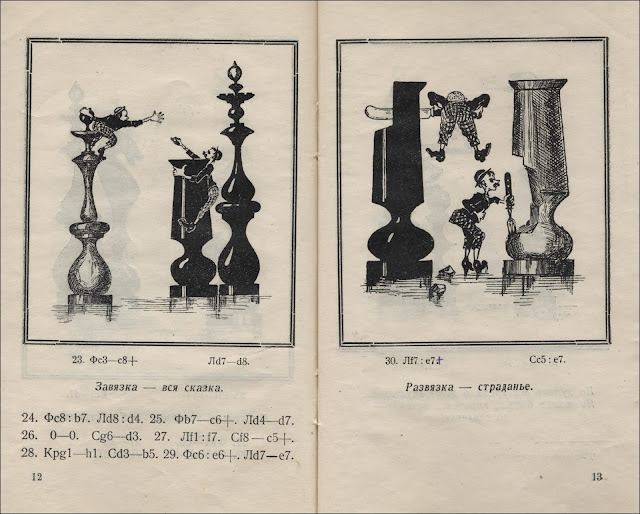 The Foreword explains the difficulties in illustrating the artistry and skirmishes on a chessboard, and that this book is the first attempt to express in caricatures the struggle of a chess game.

The whole of this lively game is given first on page 3, followed by the move by move caricatures and commentary on pages 4 to 16. 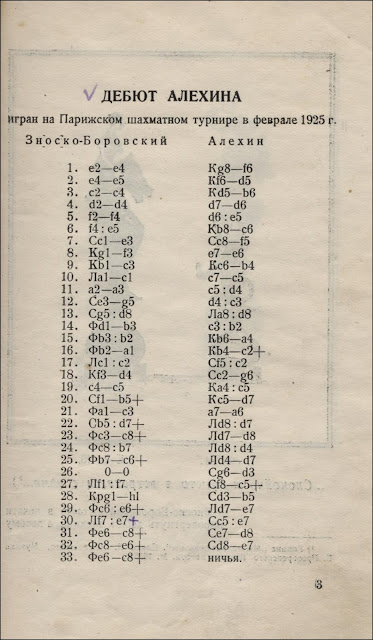 A literal translation of the captions from Russian to English does not always make much sense, but there are possibly some allusions to the fact that both of these players had fled from Russia, ending up in France.

Posted by Michael Clapham at 17:31 No comments:

Eugene Znosko-Borovsky (1884-1954), is very well known for his popular chess books published between the wars, all based on his maxim that "chess is a game of understanding, not of memory", these include:

How Not to Play Chess, London 1931. (See Preface for author's maxim given above)

How to Play the Chess Openings, London 1935.

The Art of Chess Combination, London 1936.

These books were also published in other languages, and are frequently mentioned in the "Znosko-Borovsky" entries in various Western chess encyclopedias and dictionaries. However, none of these reference works, (with one exception*), give specific details of his earlier Russian chess books, and chess columns, all published in his native St. Petersburg between 1907 and 1913.

In 1908 Znosko-Borovsky succeeded Chigorin, who died in January of that year, as editor of the chess columns in the St. Petersburg periodicals Novaye Vremya, and Niva. The first of these he conducted from January 1908 to April 1909, and the second from 1908 until 1916.

Also in 1910 he issued a general chess work, Пути Развитія Шахматной Игры, (Puti Razvitiya Shakhmatnoy Igry), (The Evolution of Chess),  with chapters on The Art and Science of Chess, Old and New Schools, The Tragedy of Chigorin, Lasker, Creativity of Schlechter, In the Future, and Chess Instruction. The first chapter is an historical article, and this book is listed in the history section of the LN catalogue at no. 259. it also appears in the Aucta bibliograpy, no. 1298. Sakharov (1968) 66, 1000 copies printed. 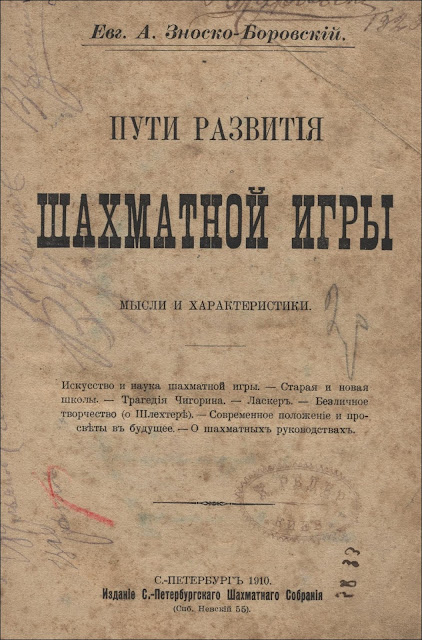 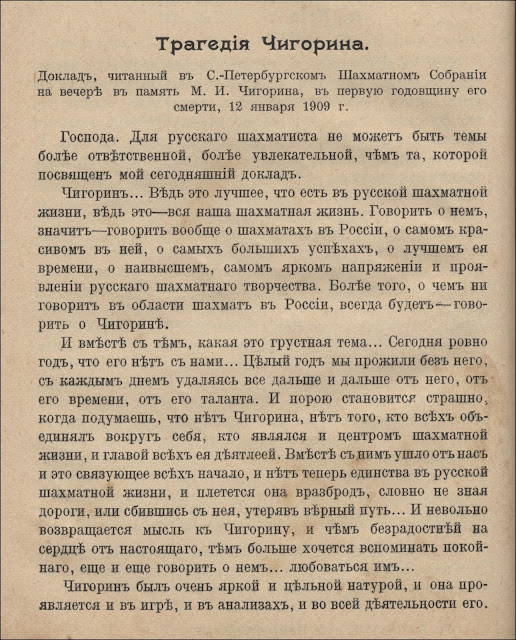 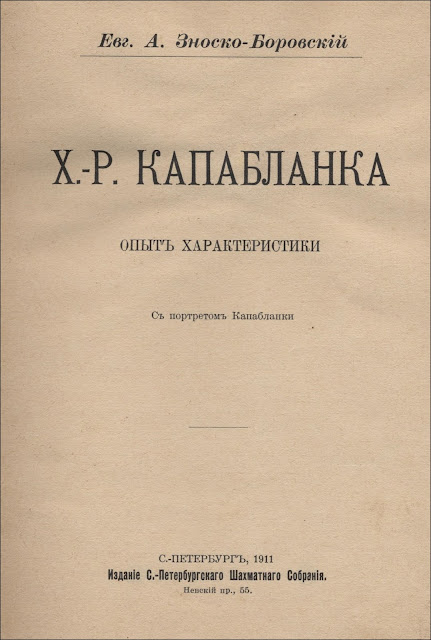 This 42 page book, based on lectures given by Znosko-Borovsky to the St. Petersburg Chess Society and the Moscow Chess Club, has no complete games but discusses in detail Capablanca's style of play, and gives as examples 15 positions and continuations from his games.  Seven of these positions are from  his 1909 match with Marshall, six are from his victorious tournament in San Sebastian in 1911, and the final two are from games against A. W. Fox played in 1906, and I. J. Sheffer in a simultaneous display in 1909. 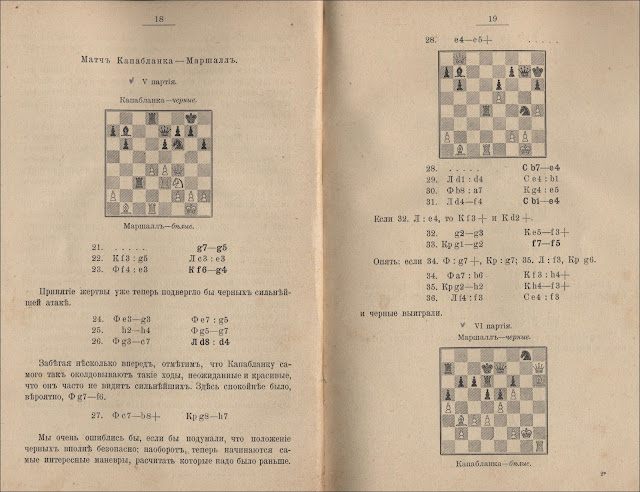 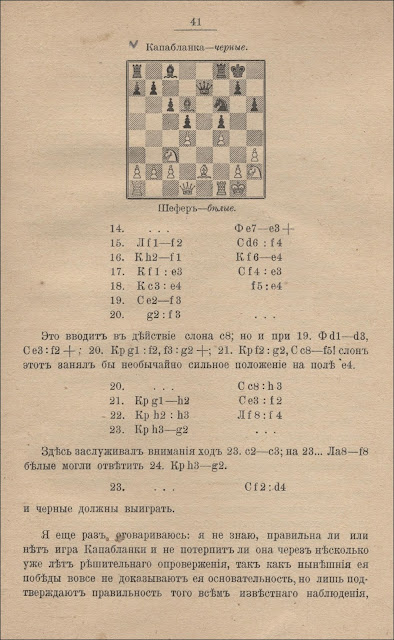 In the above game, against Sheffer, black's 19th move ....e4:f3, has been omitted. This game is also on pages 142/143 of The Unknown Capablanca, by Hooper & Brandreth, with the moves numbered one earlier.

Znosko-Borovsky's premise in his lectures, and in this book, is that chess players can broadly be divided between "time-men" and "space-men", roughly equating to the old combinative school of chess and the new positional school respectively. Assessing Capablanca's style of play up to 1911 the author comes down strongly on the time-man side.

The British Chess Magazine, obviously impressed by this work, devoted 10 pages to a detailed review on pages 57 to 64 and 100 to 102 of its 1912 volume, with long extracts translated into English. 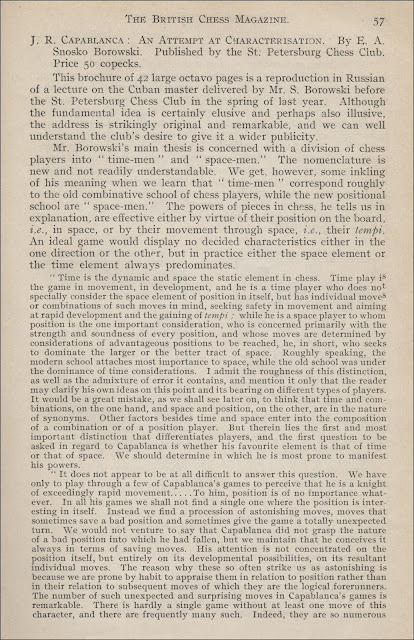 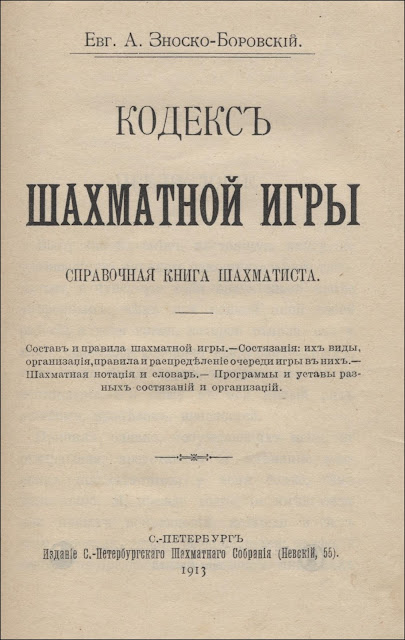 This includes chapters on how to play and the rules of the game, the organisation of chess competitions, chess notation, a chess dictionary/glossary, and details of the rules, regulations and organisation of a number of chess associations, including draft statutes of the All-Russian Chess Union which was established in 1914. 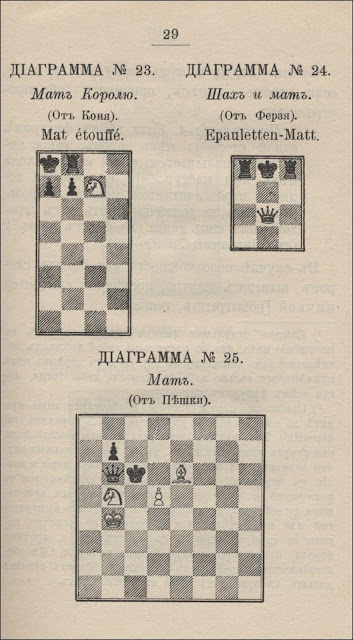 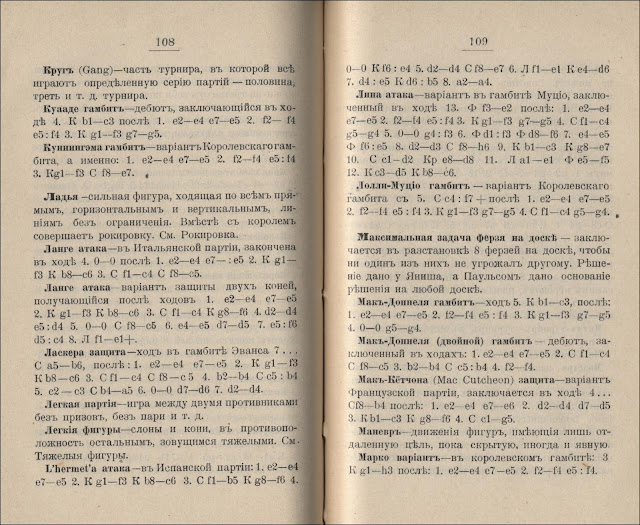 Finally, Znosko-Borovsky wrote a book on the Muzio Gambit which was published in Leipzig in 1911, and Sakharov 63 records a textbook by A. Goncharov; Краткий Учебник Шахматной Игры, (A Brief Chess Tutorial),   which was printed/published by Znosko-Borovsky in 1914.

The outbreak of World War 1, followed by the Revolution of 1917 curtailed Znosko-Borovsky's chess publishing activities until the early 1920's, by which time he had emigrated to Paris.

* The exception is Dizionario Enciclopedico Degli Scacchi, by Adriano Chicco and Giorgio Porreca, Milan 1971, which mentions the chess columns edited by Znosko-Borovsky from 1908. 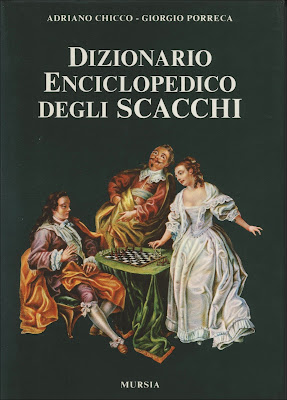 Below are some of the books used for this article: