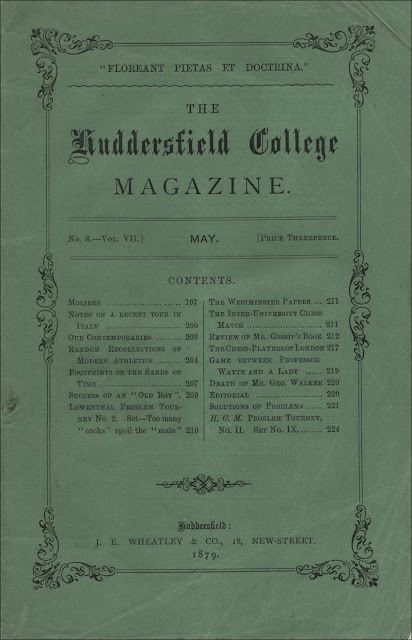 The Huddersfield College Magazine started life as a general school magazine with two pages on chess.  But, such was the extent of its chess coverage in the later volumes, and its importance in leading to the foundation of The British Chess Magazine that The HCM is included in major chess bibliographies such as Chess: An Annotated Bibliography by Douglas Betts and Di Felice's Chess Periodicals.

Betts 7-15 records that The Huddersfield College Magazine was published in eight volumes from 1872 to 1880 in Huddersfield, with W. J. C. Miller as editor from October 1872 to June 1876 followed by John Watkinson up to 1880, and that the chess section was superseded by The British Chess Magazine.

However, for the full story of this magazine see Tim Harding's deeply researched book British Chess Literature to 1914 which has extensive coverage on pages 73 to 76, with further details of how it evolved into The British Chess Magazine on pages 164/165. 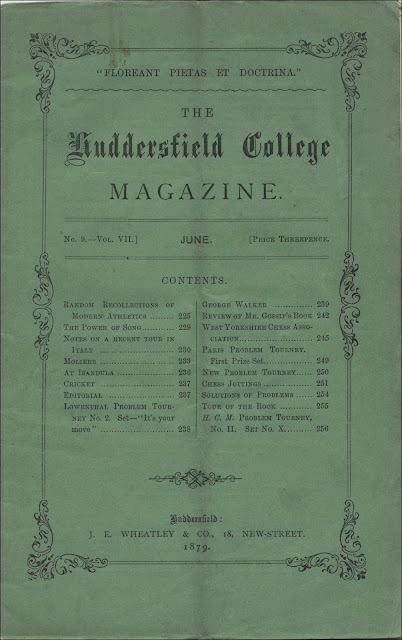 Harding notes that this scarce periodical is not available in any of the United Kingdom's copyright libraries but that complete sets are available in the Royal Dutch Library, Cleveland Public Library and the M. V. Anderson Chess Collection in the State Library of Victoria in Melbourne. (The Moravian Chess Publishing House of Olomouc, Czech Republic, has reprinted the chess pages from The HCM in a series of three books)

Although the magazine was originally aimed at pupils and old boys of the college, the ever growing chess content attracted many subscribers who had no connection with the school. Harding also hints that the transformation into The British Chess Magazine was partly to rival The Chess Monthly, edited by the foreigners Leopold Hoffer and Johannes Zukertort, with the new name waving the British flag.

The Huddersfield College Magazine flourished during a busy period for English chess magazines;  The Chess Player's Chronicle, The Westminster Papers, The Amateur Chess Magazine, The City of London Chess Magazine and The Chess Monthly were all published in England during part or most of The HCM's eight year life. Some American chess magazines were also available in England at the time.  There was, however, a short period from April 1876, following the demise of both The Chess Player's Chronicle and The City of London Chess Magazine, until the former re-launched in January 1877, when there was no British periodical devoted entirely to chess. (The Westminster Papers included whist and other recreations). 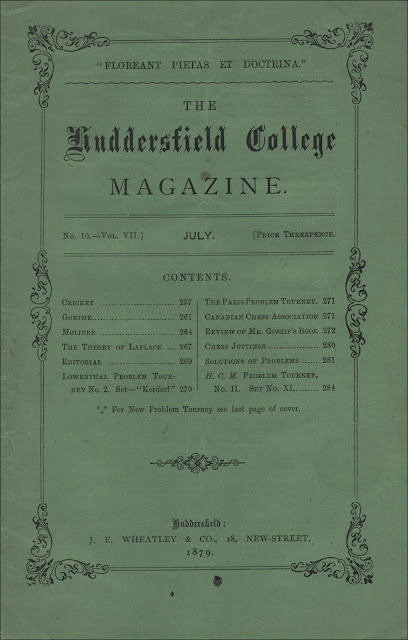 The first issues of the magazine had just two pages devoted to chess with a game and a problem. This quickly grew in stages and by 1879 chess occupied more than half of the magazine; the 32 page magazine for July 1879 for example, included 19 pages of chess with coverage of problem tourneys, local, national and international chess news, and the third part of an eighteen page review by Thomas Long of The Theory of the Chess Openings by G. H. D. Gossip.

The magazine's editor excelled in providing obituaries and memoirs of prominent chess personalities;  St. Amant, who died in October 1872, was remembered on pages 74 to 76 of the January 1873 issue, and in August 1874 a long and balanced obituary of Howard Staunton appeared on pages 232 to 234. 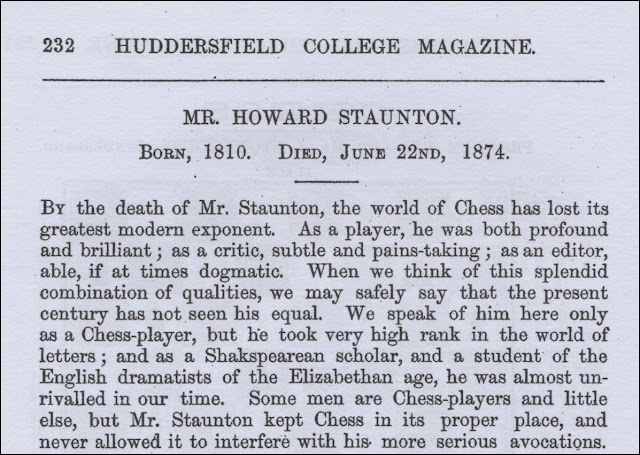 From the many obituary notices on Staunton, this essay was singled out for praise by W. N. Potter, on page 164 of The City of London Chess Magazine for August 1874, as being "most in accordance with the facts of the case"

I. O. Howard Taylor contributed a long memoir on John Cochrane on pages 211 to 214 of the May 1878 issue, (this was subsequently included in Taylor's book Chess Skirmishes, published in 1889), and a three page sketch of the life of George Walker appeared in the magazine for June 1879, this was signed simply "D", and focuses on Walker's popularisation of chess literature. 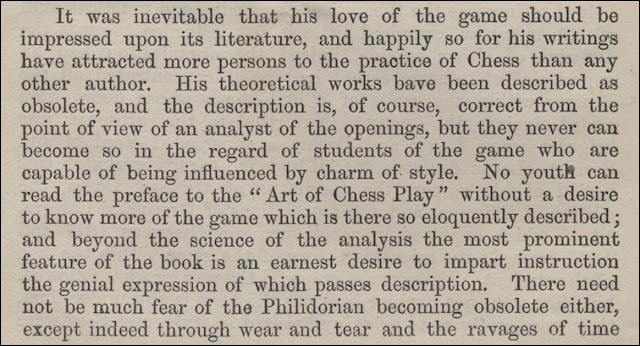 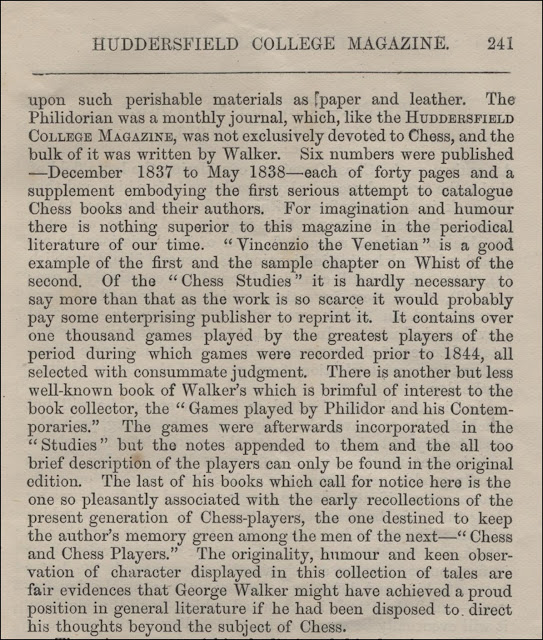 One item of particular interest to chess bibliophiles is the notice, on page 154 of the May 1874 magazine, of the forthcoming auction in London, by Sotheby and Co. of "rare and valuable works, principally on chess, forming the extensive collection of an American amateur", i.e. C. W. Whitman. 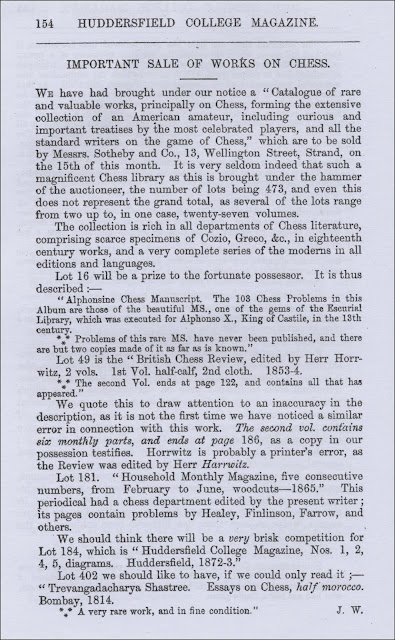 This auction of 473 lots was held on the day after the same auctioneers had sold off George Walker's library in 314 lots. Oh to have been in London on 14th and 15th May 1874! The catalogues for these two auctions are listed in Bibliotheca Van der Linde-Niemeijeriana aucta et de novo descripta; nos. 170 and 1246.

The Royal Game, by Stefan Zweig, a follow up.

It seems that my brief mention of Stefan Zweig's chess story The Royal Game barely scratched the bibliographical surface of the publication details of his final novella. 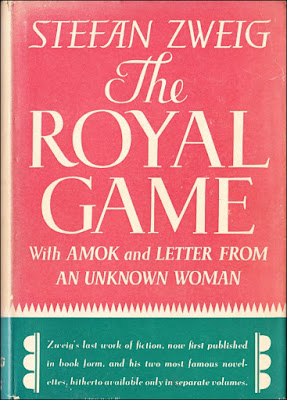 Manfred Mittelbach of Cape of Good Hope, has provided much further information including an extraordinarily detailed account of the writing and publication of Zweig's story compiled by Elke Rehder of Barsbüttel, Germany. This reveals that Zweig's original typescript was handed to his friend and publisher Abraham Koogan in Rio de Janeiro only two or three days before his death, with  three further copies being posted to associates in New York and Buenos Aires.

Rehder states that the very first publication of the story was in Brazilian Portuguese by Editora Guanabara in Rio de Janeiro in September 1942, with the title A Partida de Xadrez and was included in the omnibus volume As Três Paixões (Three Passions).

Andreas Saremba has also informed me of this Portuguese translation, stating that this was revealed by Siegfried Schönle in the brochure 65 Jahre Schachnovelle, published by Susanna Poldauf and Andreas Saremba in 2007 for the Emanuel Lasker Gesellschaft.

The first German language publication, with the title Schachnovelle, was issued on 7th December 1942 in Buenos Aires, followed by the first European edition of Schachnovelle published by Gottfried Bermann Fischer in an edition of 5,000 copies at Stockholm in 1943.

One copy of the typescript was sent to Zweig's friend and editor Benjamin W. Huebsch of Viking Press in New York. Huebsch translated the German text into English and published the novel with the title The Royal Game in April 1944. However, the English text had already appeared a month earlier in the March 1944 edition of Woman's Home Companion, enhanced with some fine illustrations. 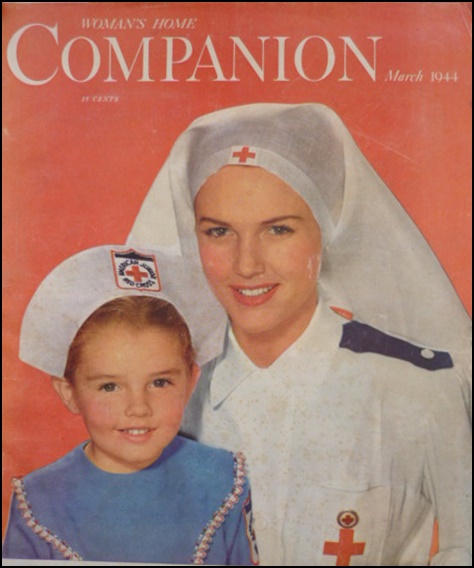 This American monthly was published by Crowell-Collier Publishing Company of New York and Springfield, Ohio. 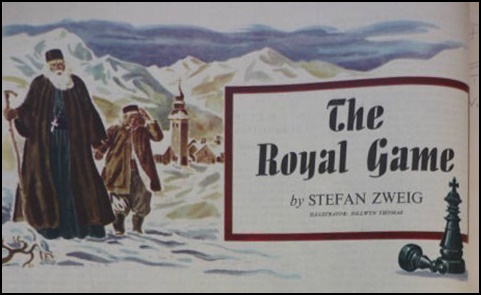 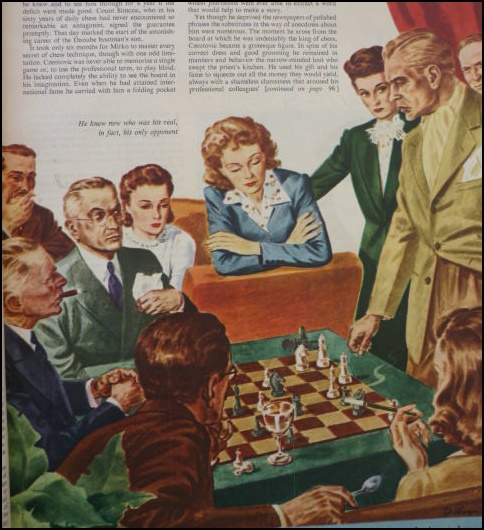 A special edition for the American Armed Forces was also published in 1944 by Editions for the Armed Services  together with Zweig's other short novels Amok and Letter from an Unknown Woman. 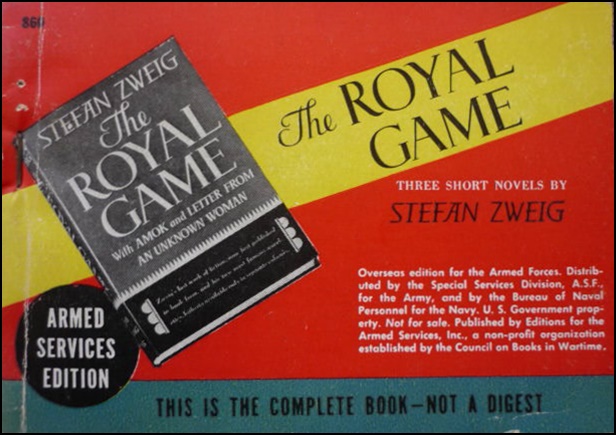 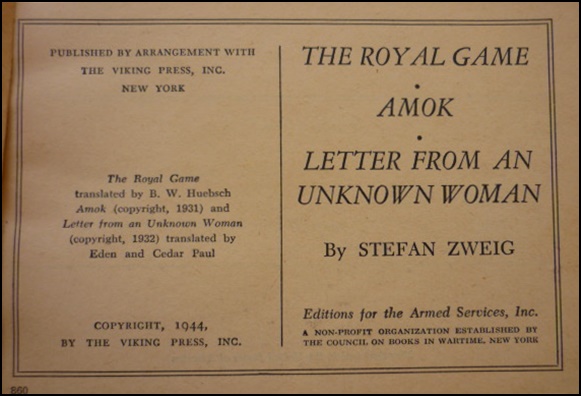 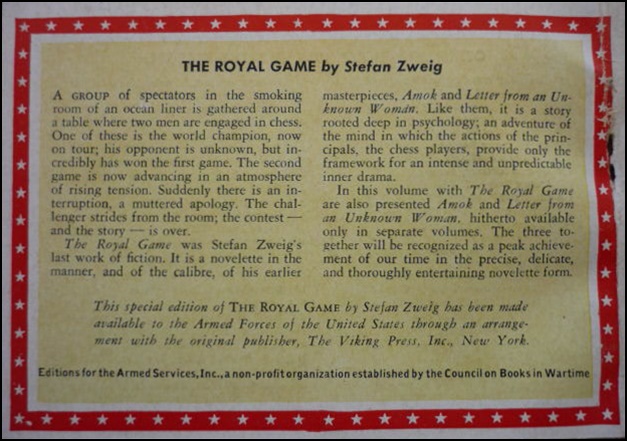 Many thanks to Manfred Mittelbach for the above illustrations.
Posted by Michael Clapham at 23:58 No comments: