Further to my article of 23rd June I have now received the book Great Chess Combinations: Robert Fischer by Aleksander Kalinin and published by Russian Chess House, Moscow 2013. 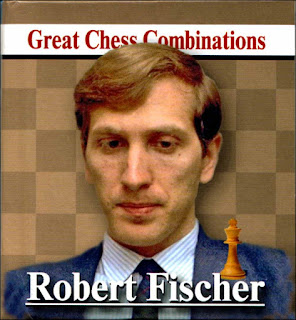 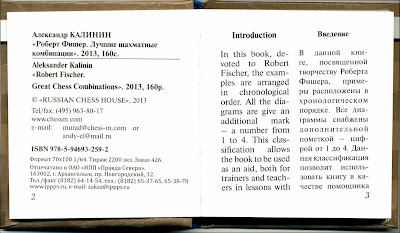 The book measures just 9 cm. x 8.5 cm. and for comparison purposes I show it beside My 60 Memorable Games. The book is one of a series; other books feature Vladimir Kramnik and Vishy Anand. 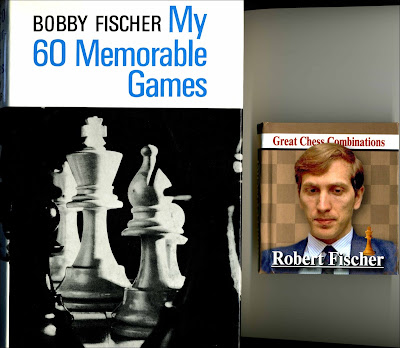 The book has 160 pages and the text is in both English and Russian. A short introduction is followed by 102 diagrammed examples from Fischer's games from 1956 (D. Byrne - Fischer, New York) to 1992 (Fischer - Spassky, Sveti-Stefan). Each example is classified by degree of difficulty of solution from 1 to 4. Solutions with analysis of each position in figurine notation are given at the end. 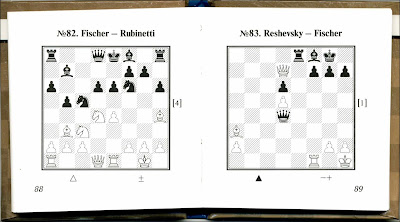 Briefly touching on My 60 Memorable Games, this was first published in England by Faber and Faber in 1969 with a reprinted edition issued in 1970, (this reprint is not mentioned in Lusis).  I used to think that the 1969 edition was identifiable by a darker blue cloth cover. However I now discover that both the 1969 and 1970 printings come in the lighter blue cloth covers.

In the above picture the first book is a 1970 reprint whereas the other two are both 1969 first editions. However, the two printings are distinguishable by their dustwrappers which not only have a different introduction on the inside flap but the price had increased from £2.50 in 1969 to £3.00 in 1970. 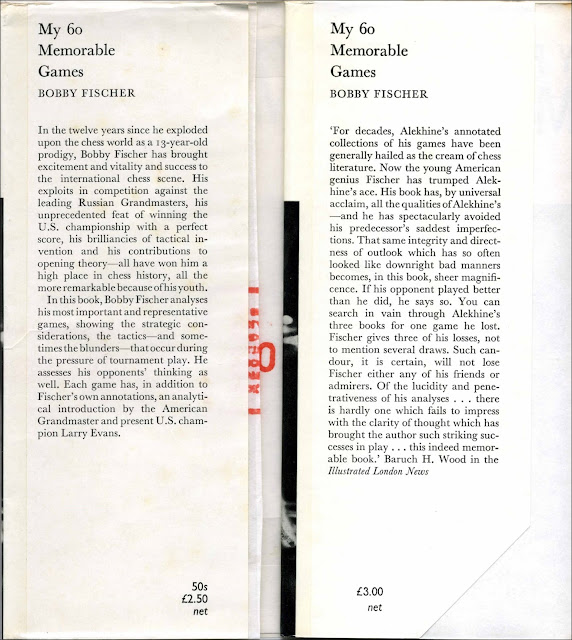 Seven of my 41 articles to date have featured Bobby Fischer and, while these are generally the most viewed articles,  I will have a break from Fischer for a while and concentrate on other subjects. The articles will also be less frequent during the summer holiday months. Thanks for reading.

Here's one you haven't got !

As collectors we seek the unusual and we particularly enjoy finding items that few others, if any, have acquired.  Most of us will possess some items out of the ordinary, probably rare, and possibly unique. The item doesn't have to be very old, or even particularly valuable and, quite often, the rarest items are ephemeral, with only a few having survived.


From time to time I will put forward an item from my collection which I think falls into this category and I would be interested to hear if any other collectors have the same item. 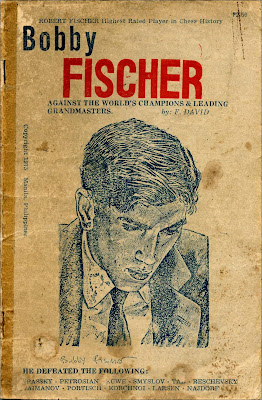 I can find no record of this seemingly rare collection of Fischer's games in any bibliography, library or online resource, although it would be incredible if there are not other copies around, bearing in mind the subject matter. 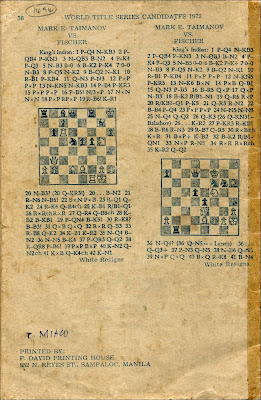 This apparently self published booklet is printed on poor quality paper and is very worn for its age. Many books from the 16th and 17th centuries have survived in better condition than this particular item.

The book has 36 pages, including the covers, and includes a one page Brief Biography of Bobby Fischer followed by 36 of his best known games, mostly unannotated. 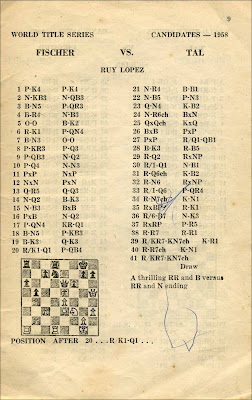 My copy of this book is featured in Lawrence Totaro's Fisching for Forgeries, published by Thinkers' Press in 2007. 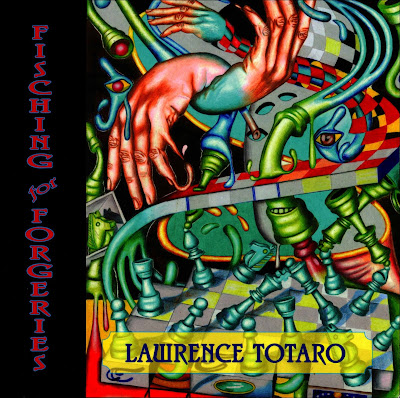 Totaro's interesting and profusely illustrated, but poorly written, book gives many examples of genuine and forged Fischer signatures and, in the section on facsimiles, he shows the front cover of my book (which he took from eBay) and highlights the facsimile signature of Fischer. However, the eBay seller did not claim that the front cover signature was genuine; but the book is signed by Fischer (I hope) on page 3. 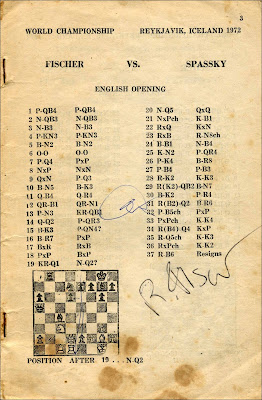 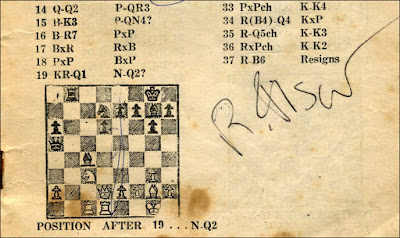 In correspondence with the seller, after I purchased this item, he informed me that he obtained Fischer's signature when he visited the PTV4 TV station in Manila in 1975 to watch a Chess Today broadcast hosted by Florencio Campomanes with Bobby Fischer as a guest. He described Fischer as being temperamental and showing poor manners during an interview with various local and foreign newspaper journalists.