A shambolic book on Fischer 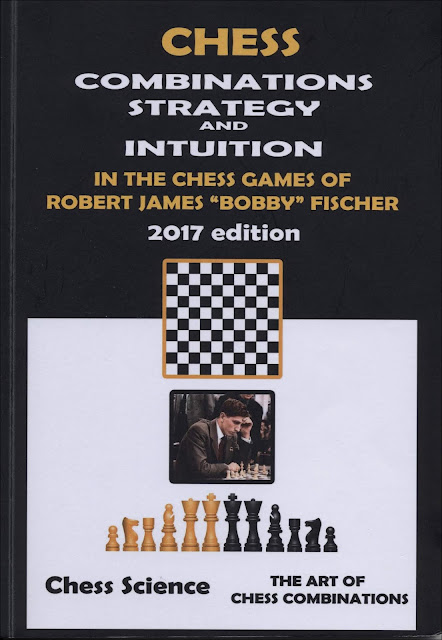 The title page promises Complete games: Openings, Middlegame and Endgames (including annoteted games) but, perhaps wisely, does not name any author, editor or compiler.  However, the author is Chaturang Phalak (chess player and writer - Facebook) who has self-published, through Amazon, a number of chess books under the publishing name of Chess Science whose logo is a 10 x 10 chequered board with a dark square bottom right. 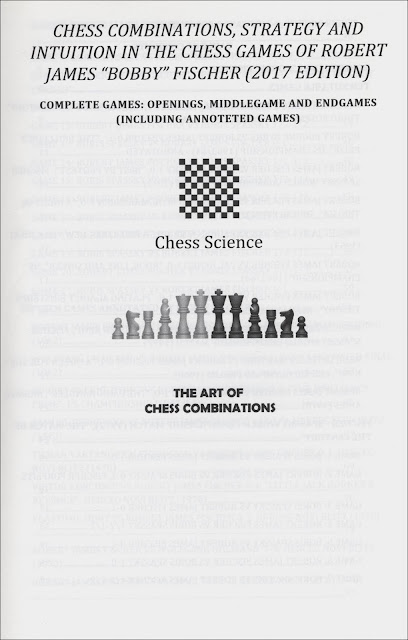 The 111 pages are not numbered although the Table of Contents indicates 133 pages. The discrepancy is due to several games being allocated two pages in the Contents but are actually squeezed into one page in the book. The occasional completely blank page is also included here and there.

The book starts with an inane and inept biography which condenses the entire life and chess career of Robert James "Bobby" Fischer into just over a page, including a portrait, ending with a link to Youtube for further biographical information.  No matter, we already know practically everything about Fischer, so on to the games.

The first chapter, Ten Notable Games, kicks off with Fischer's brilliancy against Donald Byrne in the Third Rosenwald Trophy Tournament (1956), with a few comments taken from The Games of Robert J. Fischer by Robert Wade and Kevin O'Connell, London 1972, or from the internet. This is followed by Robert Byrne vs Fischer, U.S. Championship 1963/64 with comments from various unidentified sources but mostly lifted from My 60 Memorable Games.  The final eight Notable Games contain just the bare moves. 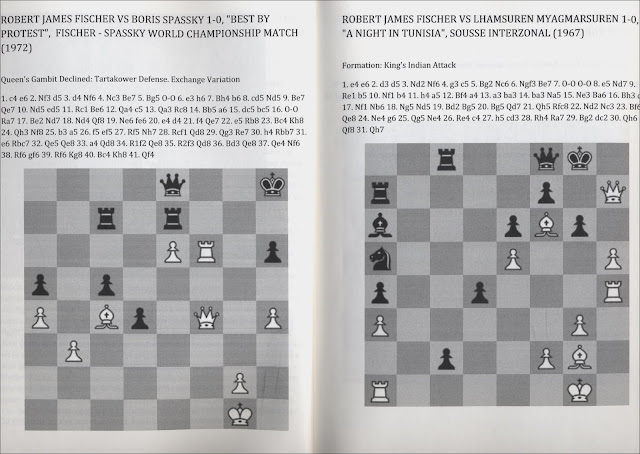 The next chapter, covering the 1972 world championship match, commences with a bumbling preamble to "the Match of the Century". The first line gives a flavour:

The author reveals the secrets of top-level preparation:

... and for good measure, the final two paragraphs are duplicated in full: 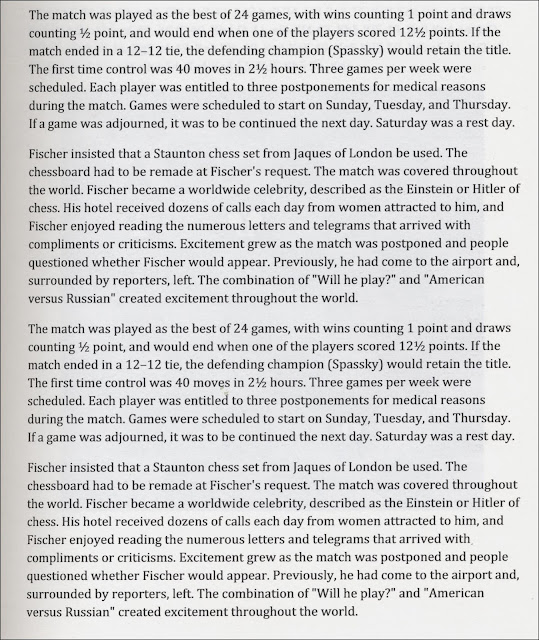 All of the games in the match are given, with just the bare moves, even though games 6 and 13 had already been included a few pages earlier in Ten Notable Games. I have not played over all of the games but the few that I have looked at seem accurate enough. However, the presentation is completely colourless with no commentary, explanations or analysis, no chess punctuation, and certainly nothing to demonstrate Fischer's Combinations, Strategy and Intuition. Typical of the blandness is Game 3, considered by Fischer as one of his best in the match, and at the end of which he "sealed a crusher" (see note at end); 41...Bd3+, 0-1: 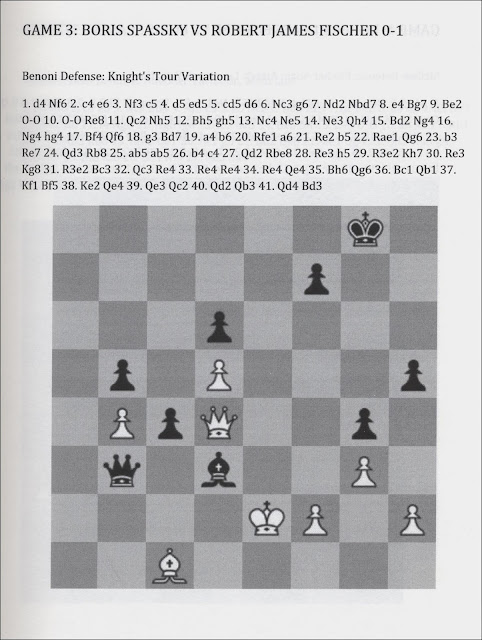 Chapter three is Fifteen Games Annotated by Bobby Fischer, beginning with Fischer vs Bolbochan, Stockholm 1962, with half a dozen of Fischer's comments from My 60 Memorable Games. However, the copy and pasted notes retain Fischer's descriptive notation amidst the algebraic notation of the game moves. 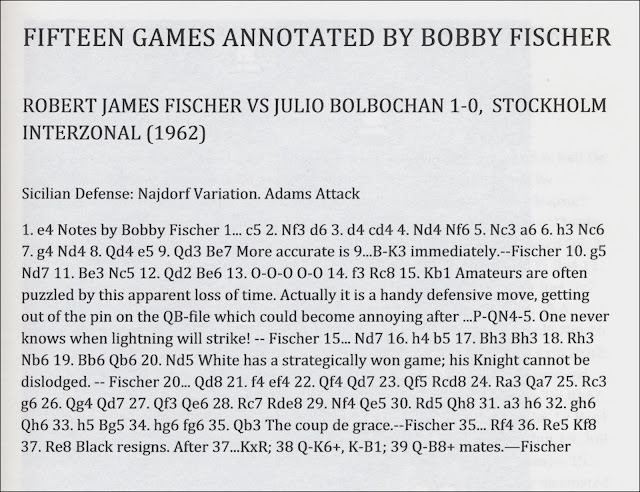 Next is Unzicker vs Fischer, Varna 1962 with selected notes from My 60 Memorable Games,  then comes our old friend, the game between Robert Byrne and Fischer, U.S. Championship 1963/64, with identical text and diagram from chapter one: Ten Notable Games.

The final twelve games in this chapter are all from the Blitz Tournament held in Herceg Novi 1970, and this time all of the notes are poached from Chess Meets of the Century by Bobby Fischer and Dimitrije Bjelica, Sarajevo 1971. 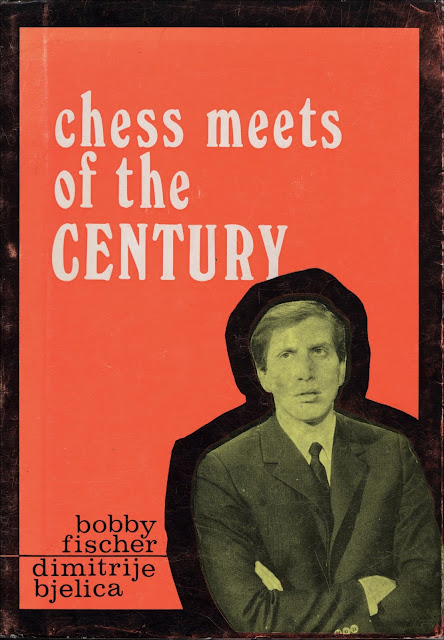 The title of the next chapter; Fischer on Buenos Aires Tournament (1970), raises the hope that we are in for some of Fischer's insights into his 17 games from that event, however, there is not a single word from Fischer, and the only game in this chapter with any commentary is Fischer vs Samual Schweber with two short notes taken from Chessville.com. This game is followed by a pair of identical diagrams (typically unhelpful) showing the final position: 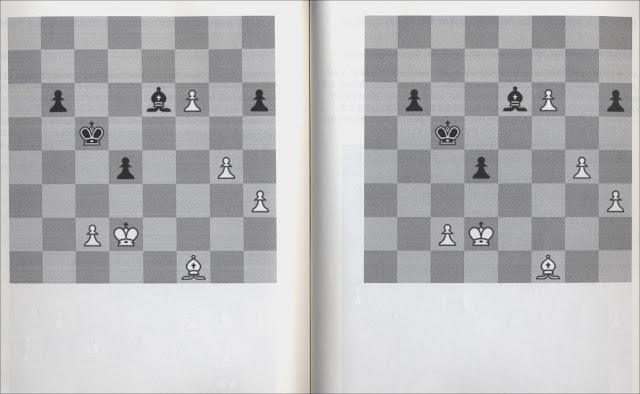 The game between Fischer and Oscar Panno had already been given in chapter one.

The final chapter; Selected Fischer vs Russians Games presents 13 games from 1958 to 1962, all silently, but with no repeats.

No sources are credited or acknowledged anywhere in the book; there is just the odd mention of "Fischer", "Wade", "Byrne" etc. in the notes. Each game is accompanied by an oversized computer-generated diagram showing the final position but otherwise devoid of information.

The moves to most games are given with zero chess punctuation, so there is no indication if a move involved a capture or check, was good or bad, or even if it ended the game. Where there are lines of analysis, these blend into the actual game moves with no separation or highlighting.

Compared to many of the classic games collections of the past this shambles is an extraordinarily feeble production.

Note: "I sealed a crusher!" is on page 202 of Bobby Fischer vs. the Rest of the World by Brad Darrach, New York 1974, and is quoted on page 161 of Bobby Fischer Goes to War, hardback edition, (page 248 paperback edition), by David Edmonds and John Eidinow, quoting Frank Brady.


Posted by Michael Clapham at 18:43 No comments: