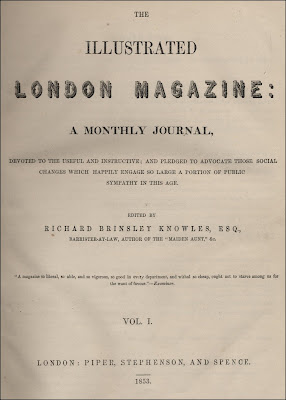 In the previous article I included the chess columns from Volume I of 1853. I now learn that the first five volumes are available on Google Books as follows:

Volumes III and IV are here. Volume III covered July to December 1854 with chess columns from September to December on pages 106, 154, 211, and 256. The September column included a recently played game between Green and Williams, and assuming that this was Elijah Williams, the column's editor, this was possibly one of his last games before he died on 8th September 1854.


Williams' successor as chess editor is not named but was possibly Josef Kling, as most of the games included were played in Kling's Chess Rooms and many of the problems are by Kling.

Thanks to Dr. Timothy Harding for much of this information. Harding's forthcoming book British Chess Literature to 1914, A Handbook for Historians, is eagerly anticipated. 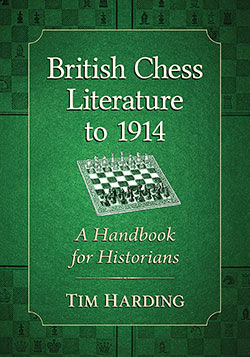 I previously stated that the book: Leicestershire Chess Club Centenary Tournament, 1961, had been omitted from Douglas Betts' Annotated Bibliography. That was incorrect as this book is included, hidden away at the bottom of page 359, and I have removed the details from my previous article.

However, a tournament book not recorded by Betts is Commonwealth Tournament, Oxford 1951, edited by Ken Whyld. 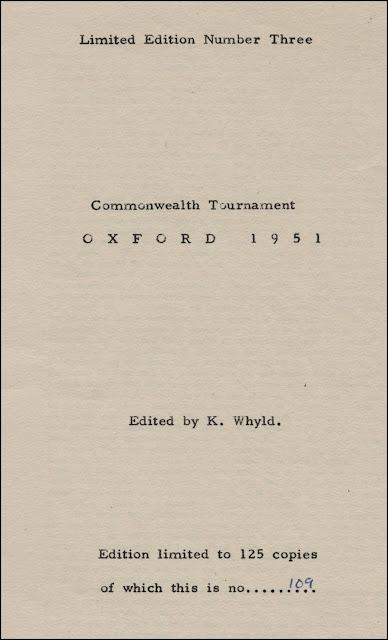 This is Ken Whyld's Limited Edition Number Three, and it is curious that Betts missed this considering that he included the other five books in the series. The edition was limited to 125 copies and in an email dated 2002 Whyld informed Eric Fischer that he did not have a copy himself.

An intriguing note at the end mentions a publication on Vienna 1882 "not for general sale".

The following photograph, with caption, from the event was published on page 55 of A History of Chess by Jerzy Gizycki, (English text edited by B. H. Wood), London 1972. This book is packed full of wonderful photos and illustrations. 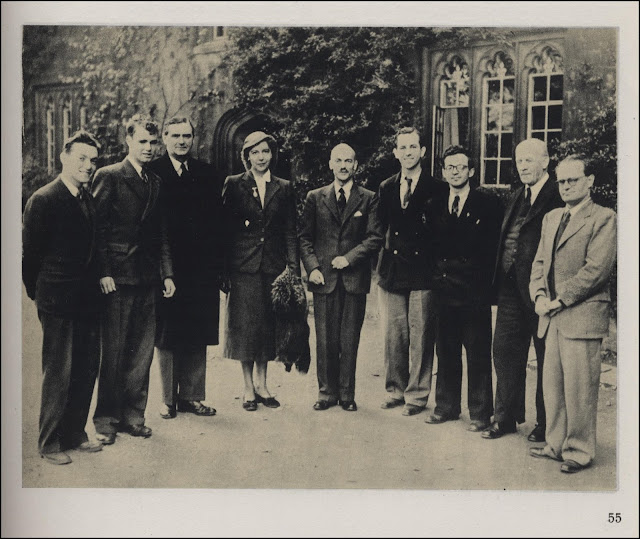 In the first article on A. J. Souweine's catalogue I included an illustration of, what I thought, was the first edition of Marache's Manual of Chess, with the "fancy pictorial wrapper": 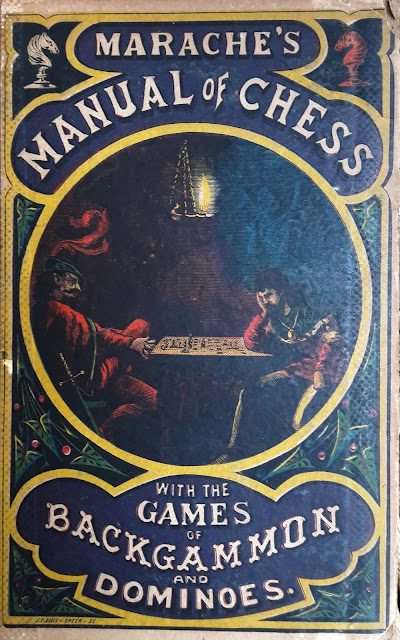 However, René Wukits has queried whether this colourful cover was really published as early as 1866. Perhaps the first edition had this green and gilt cover: 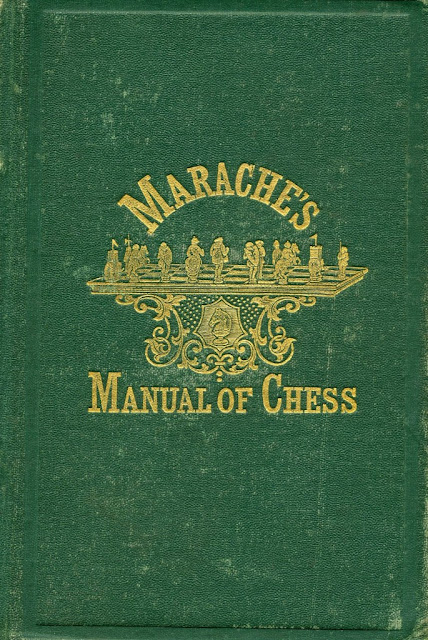 The Chess Problem by R. McClure 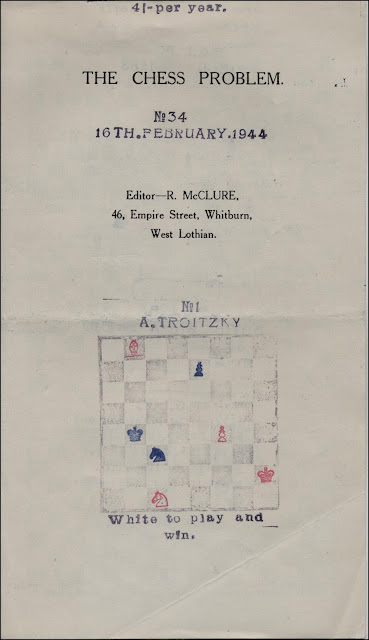 In my article on this rare periodical I claimed that it was "the only British chess periodical which commenced operations during the war years". Jurgen Stigter has pointed out that the West London Chess Club Gazette (which is absent from Betts' Bibliography) was also launched during the war, having commenced in November 1941. 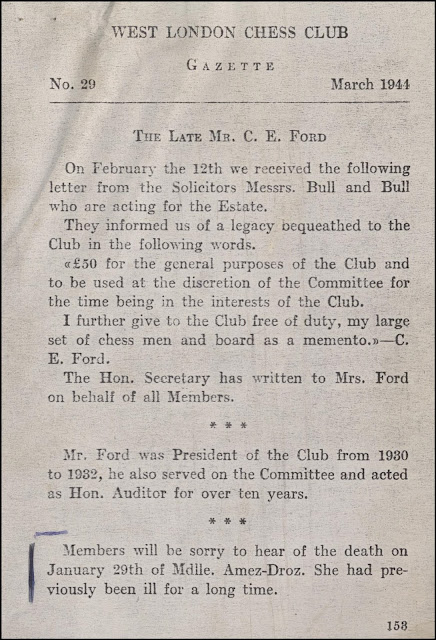 
Chess Pie No. 2 and the International Team Tournament, 1927

In my article I stated that no tournament book on this event was published. Wrong again; the very useful recent publication: Chess Competitions, 1824-1970, compiled by Gino Di Felice, lists six books and pamphlets relating to this tournament. 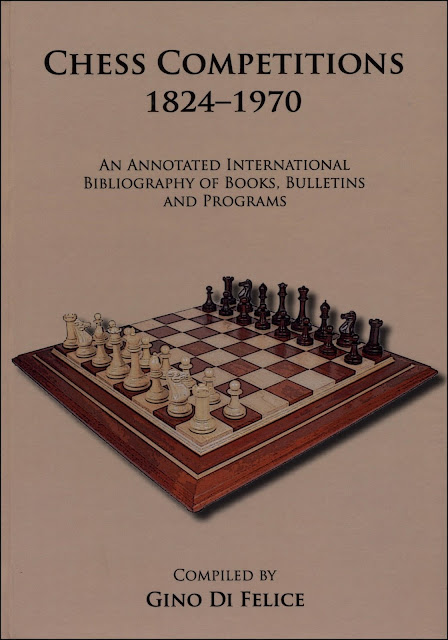 Lombardy's article on Bobby Fischer, A Mystery Wrapped in an Enigma, from Sports Illustrated is available in full on several websites including Chess.Com, here and here.

Lombardy's inscribed copy of My 60 Memorable Games was sold, along with some other items, at Bonhams, New York last December for $1,875. I understand that this copy of Fischer's book is now being advertised for sale for $50,000!


I am always very pleased to receive comments and corrections .


Posted by Michael Clapham at 11:08 No comments: 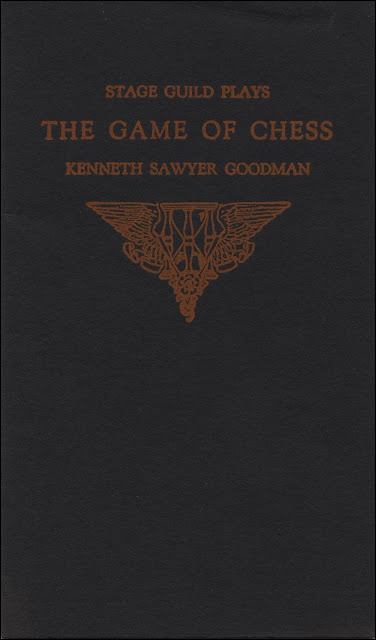 The Game of Chess was Kenneth Sawyer's best known play first performed in 1913 and first published in 1914. This is not a chess book as such, but this clever one act play, set in pre-revolutionary Russia and with a cast of four, opens and closes with a chess game in progress. 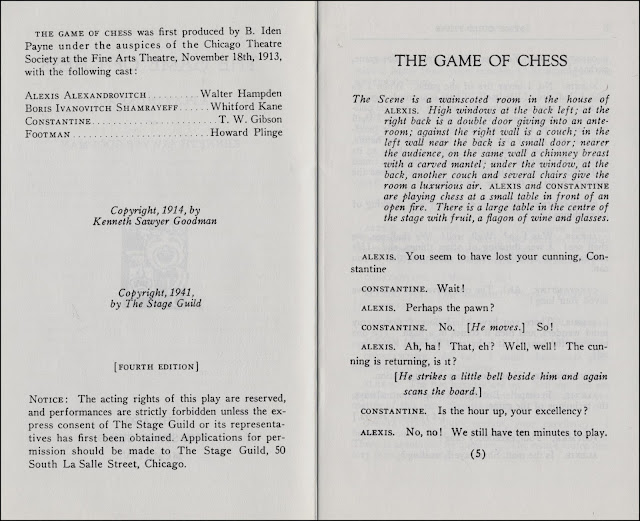 This publication is recorded in Betts' Bibliography at 46-5 where he quotes the colophon at the end of later editions stating that the first edition consisted of 150 copies on Japanese Vellum, indicating a small limited edition. However, the colophon in the first edition, which is freely available online, states that there were also 1,050 copies printed on laid paper.

From Morphy to Fischer, Who's Next: A Russian's viewpoint. 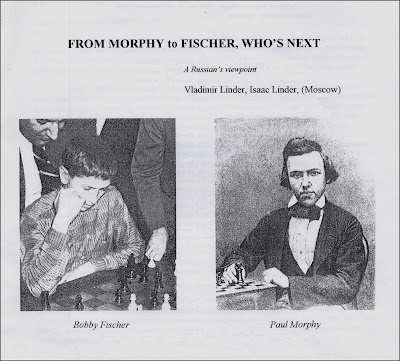 This twelve page pamphlet by the Russian father and son chess historians and authors, Isaac Linder and Vladimir Linder was issued in 2002 and, I believe this was an essay delivered at a meeting of Chess Collectors International. 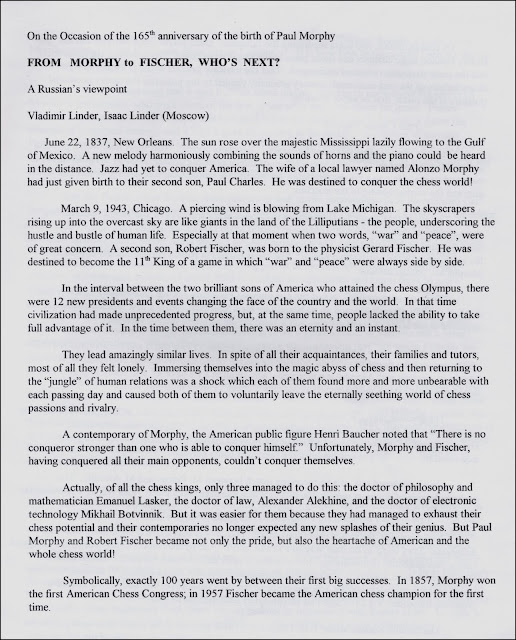 The authors discuss American chess heroes with lengthy observations on Morphy and Fischer, and a paragraph or two on Pillsbury, Marshall, Fine and Reshevsky. The "Russian's viewpoint" is generally complimentary and favourable to their subjects, while making some honest insights into their characters, particularly Fischer's:

Frank Brady refers to this essay in his book Endgame published in 2011. The reference is on page 369 of the hardback edition (page 425 of the paperback edition) in a note to page 264 (page 315, p/b) where details are given of the $100,000 in cash handed to Fischer in 1993 by Kirsan Ilyumzhinov, in payment of royalties in respect of the Russian edition of My 60 Memorable Games. 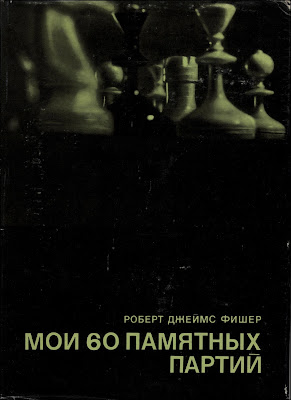 The final page of this pamphlet has a large group photograph from the U.S.S.R. v The Rest of the World match held in Belgrade in 1970. 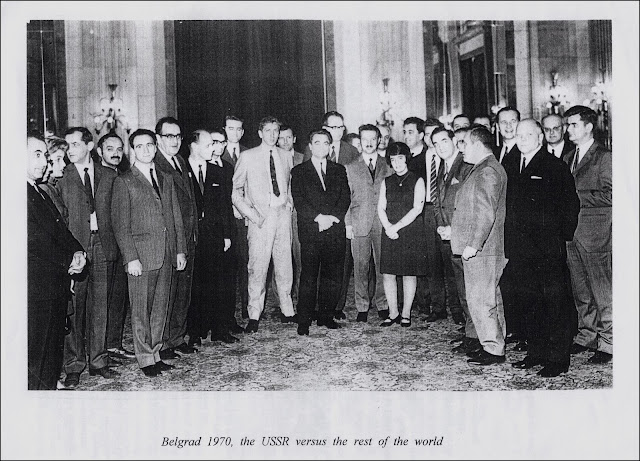 One Hundred Chess-Games Played Between Mr. J. F. Emmett and Mr. Vivian Fenton, During the Winter of 1864. Published by Trubner and Co., London 1865. 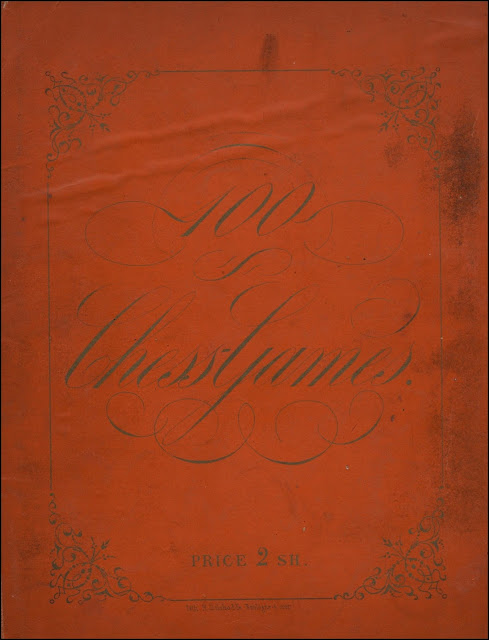 This is one of the very first books dedicated to recording the games between two players, probably only preceded in English works by William Lewis's A Selection of Games at Chess, Played at the Westminster Chess Club, between Monsieur L. C. de la Bourdonais and an English Amateur of First Rate Skill, [Alexander McDonnell]), London 1835, and,  An Account of the Late Chess Match between Mr. Howard Staunton and Mr. Lowe, by Thomas Beeby, London 1848. 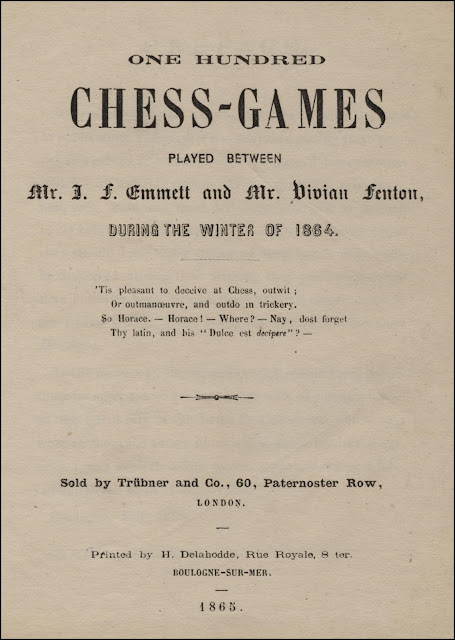 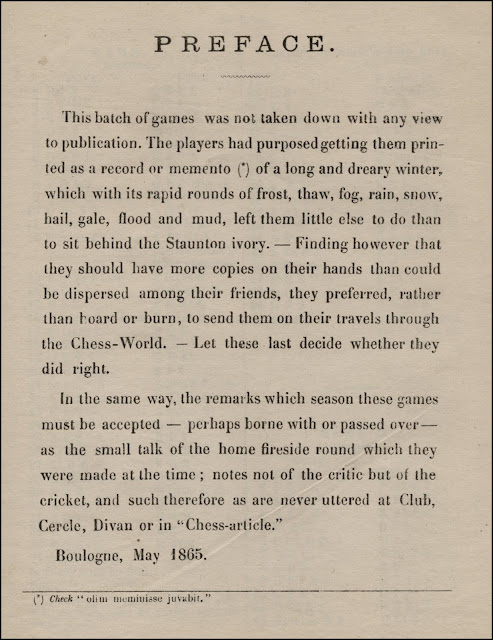 The one hundred games are given with occasional light notes, often one word,  frequently in Latin, and with many witty metaphors:

Throughout the winter, Mr. Emmett had the black pieces and Mr. Fenton the white pieces, but they alternated having the first move. The overall result was declared to be 58 wins for Emmett, 38 wins for Fenton and 5 draws, which adds up to 101 games but there is some confusion in the scoring right from game one which is marked up as a win for both players. There is also the remark on page 52, after game 91, that games exceeding 50 moves have, with two exceptions, been omitted, as taking up too much space. 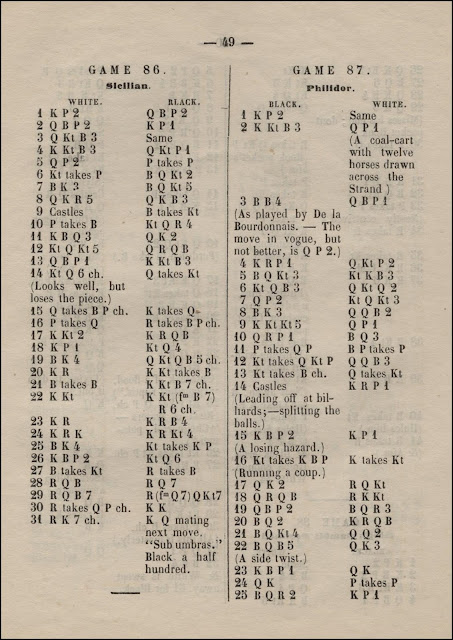 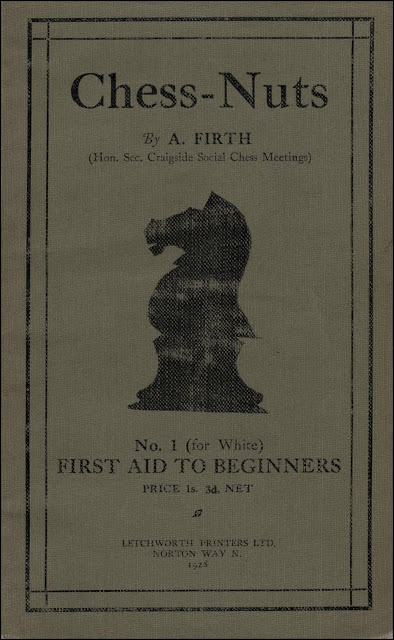 The first, and only, book in a proposed series of small handbooks for beginners and social chess players. The aim was to teach some basic openings from both White's and Black's points of view, and the material was "taken from articles which have already appeared in two or three provincial papers" (BCM, London Chess League Supplement, 1928 page 386). However, these articles are not recorded in Chess Columns, A List, by Ken Whyld, Olomouc 2002.

Part I dealt with White's point of view and page 73 included an announcement that Number 2 of the First Aid Series would give Black's point of view, however there were no further books in the series. 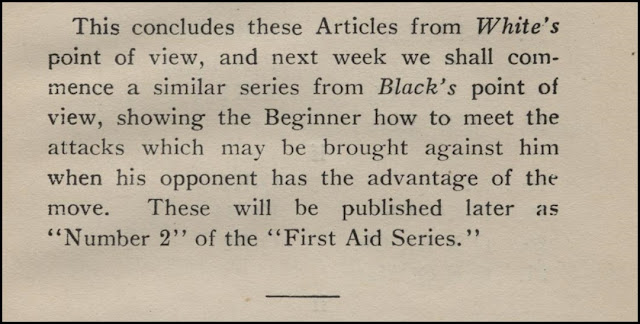 Social Chess was a theme for Arthur Firth who contributed a series of articles to The British Chess Magazine under the heading of Social Chess in 1929 and 1930
before launching his own chess magazine The Social Chess Quarterly which appeared from October 1930 to April 1936. 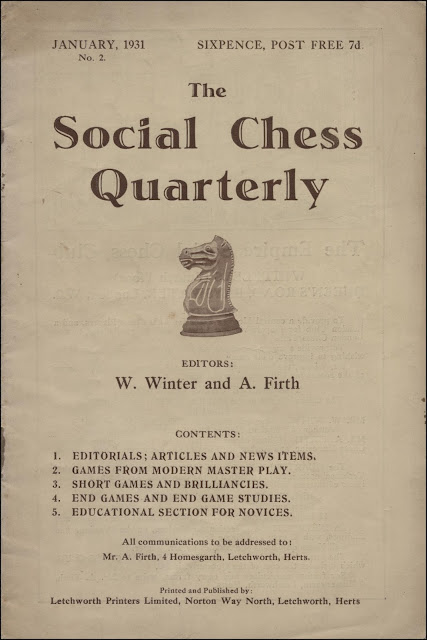 Firth also issued Chess-Nuts or Chess in a Nutshell in 1929, being 50 cards with an end game or study on one side and the solution on the other. He advertised these in all 23 issues of Social Chess Quarterly.

Posted by Michael Clapham at 16:30 No comments: