Jack Spence, a lawyer from Omaha, Nebraska, USA, launched his series of limited editions in 1949, when in his early 20's, with a book on the 50th United States Open Championship which was held in his home town, and produced a total of 60 limited editions during the next 15 years. 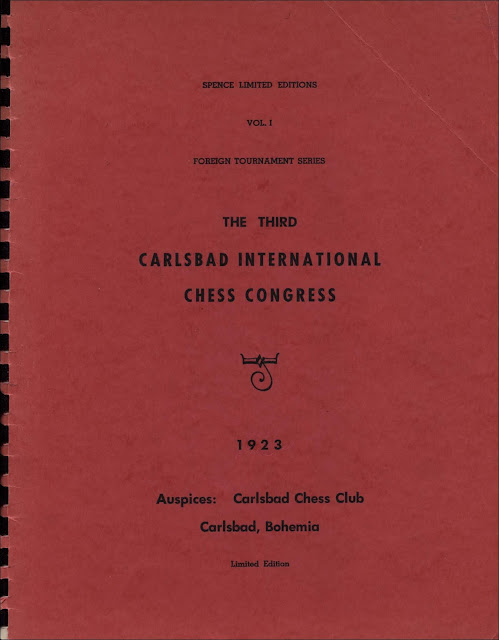 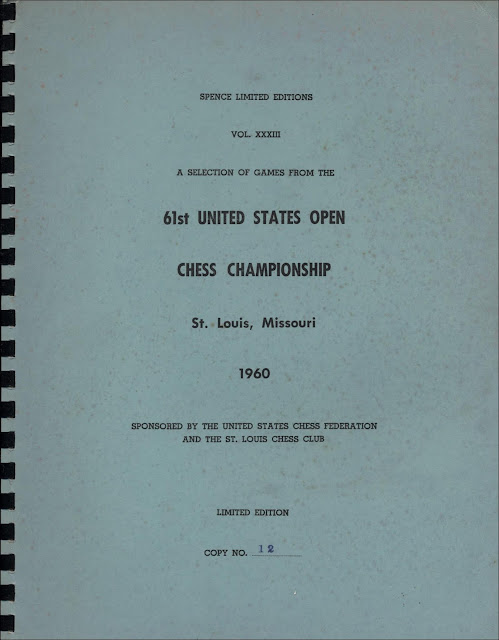 These were mainly records of contemporary American tournaments but he also revisited major tournaments from the past, and his Foreign Tournament Series included several important events from the 1920's and 1930's such as Carlsbad 1923, Bad Kissingen 1928, San Remo 1930, etc. One of his aims was to present these tournament games for the first time in the English language.

The books were generally mimeographed, printed on rectos only, and bound in card covers with a plastic ring binding. The Supplements were simply stapled sheets without covers. Each copy was numbered. However, adverts for the Omaha 1949 book, which I have not seen, emphasise that it was press-printed and includes many photos. 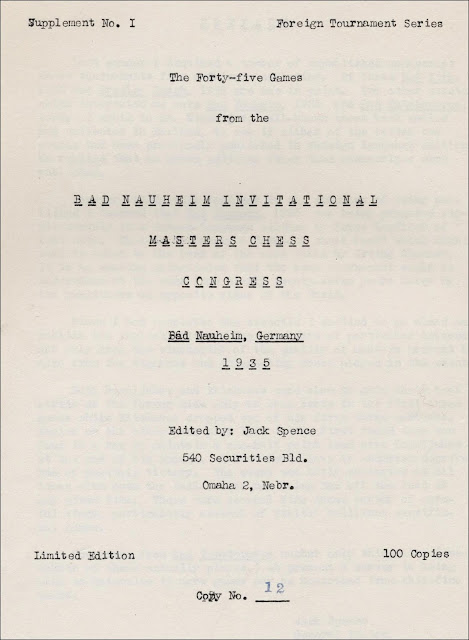 These publications typically included a Preface and/or an Introduction giving details of the event covered and, occasionally, the source of the material, followed by cross-tables, brief but succinct round by round summaries, the games in descriptive notation (some books have light notes and comments, others do not), indices of games and openings, and usually a page of adverts for these limited editions.

Carlsbad 1923 also included a list of subscribers with 36 names: 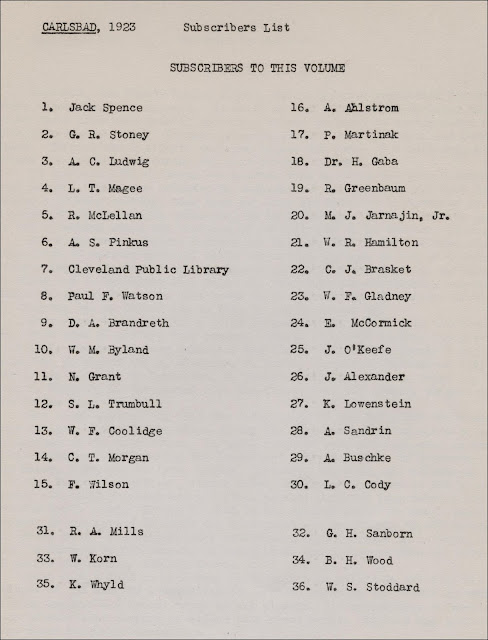 In the Preface to Bad Nauheim 1935, Spence states that the source of his material was the acquisition of a number of unpublished chess tournament manuscripts from a Chicago collector, and in the Preface to New York 1933 this collector was revealed to be Paul Little, noted chess bibliophile of Chicago. 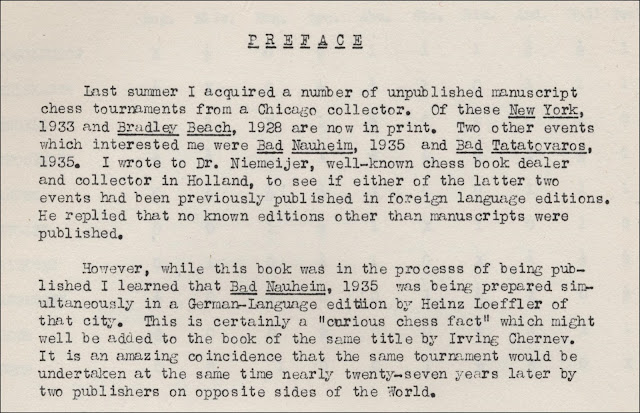 After ending his series of limited editions in 1963, Jack Spence continued editing tournament booklets for Tony Gillam's The Chess Player series. One of these was a re-typed edition of his own book on the Wertheim Memorial Chess Congress held in New York in 1951, as most copies had been poorly printed with only a few being completely legible. (See Betts 25-206). Spence died in 1978 aged 52. 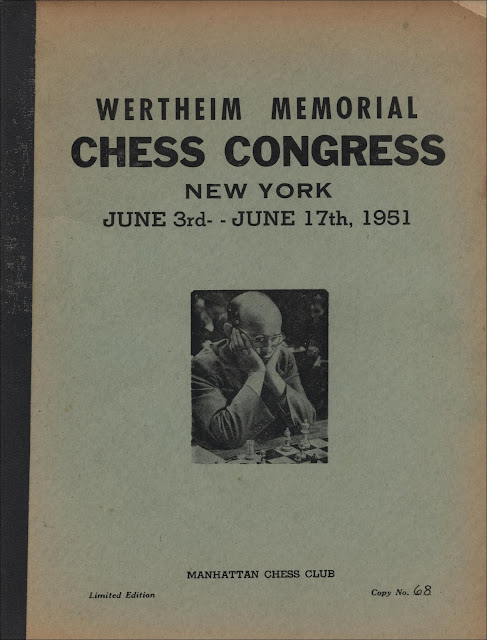 
Richard McLellan from Omaha, Nebraska, produced five limited editions from 1958 into the 1960's in a style very similar to Spence's productions, down to the same pink card covers and plastic ring binding. However, his books were simply a record of the game moves with absolutely no narrative or comments, not even forenames for the competitors. 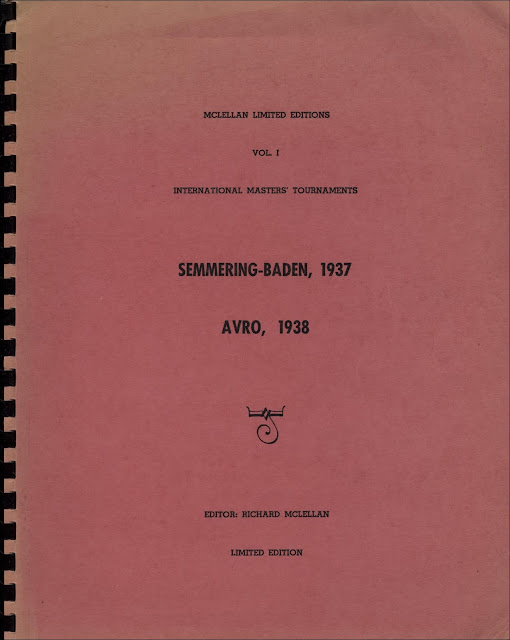 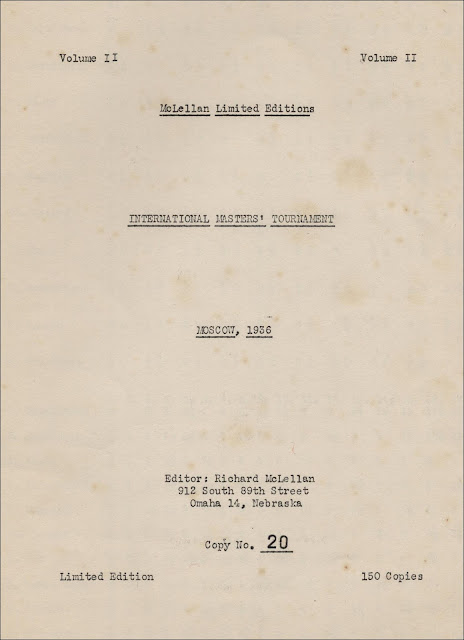 McLellan, who had earlier assisted Jack Spence by translating German texts for some of his works, published his first limited edition in 1958, covering the tournaments at Semmering-Baden, 1937 and Amsterdam (AVRO), 1938. Semmering-Baden, 1937 had previously been the subject of Reinfeld's limited edition no. 7, published in 1938. Both of these tournaments were won by Paul Keres ahead of Reuben Fine, and they had four world champions behind them at Amsterdam. 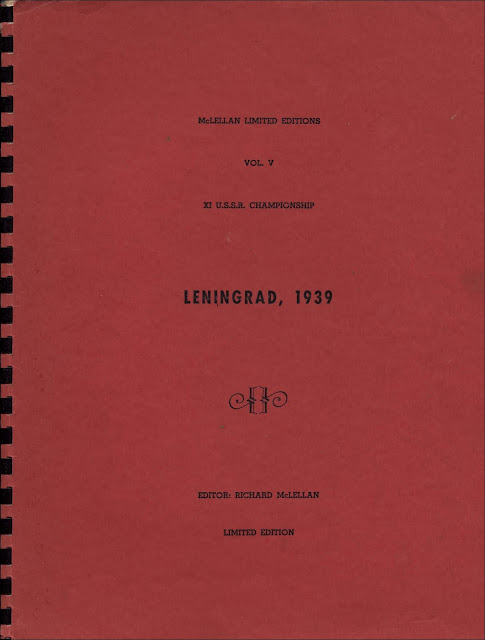 All of McLellan's books covered European events from the 1930's and 1940's, including the match between Paul Keres and Max Euwe in 1939-1940 which had the smallest of his print runs with 120 copies.

G. R. Stoney was a railroad timekeeper from, yes, you guessed it, Omaha, Nebraska, and he published his only limited edition in 1953 with a selection of games from the International Chess Tournament, Carslbad 1911.   Only 100 copies were printed, mimeographed onto the rectos only and bound in pink card covers. 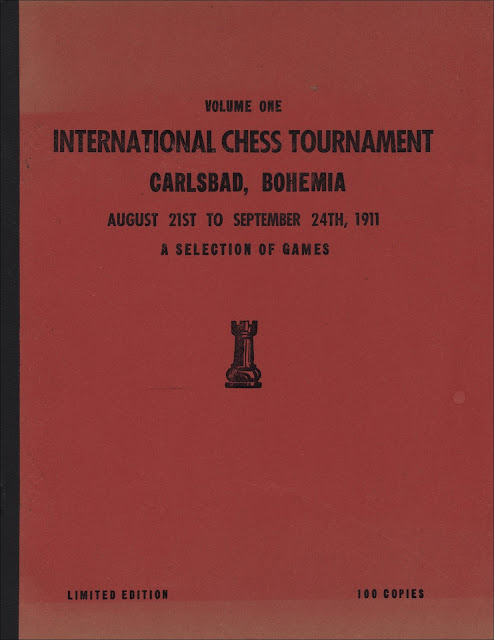 Stoney wrote an interesting two page Preface with details of the production of his "unassuming little volume", explaining that the games were compiled from various books, magazines and newspapers over a period of several years. He had particularly drawn from the Year-Book of Chess, 1912, by E. A. Michell. He recognised the difficulties encountered by Reinfeld, Cordingley and Spence in producing their own limited editions, and left open the possibility of producing further volumes. 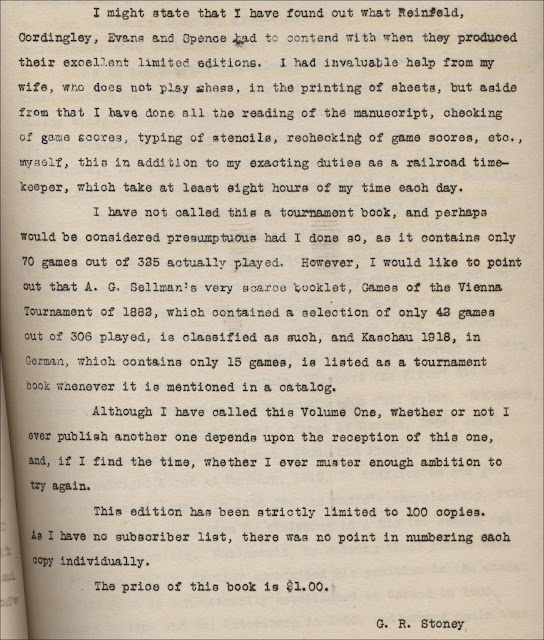 The two page Introduction gives an overview of this very strong 25 round tournament, won by Teichmann ahead of Rubinstein and Schlechter with Marshall, Niemzowitsch, Alekhine, Spielmann etc. behind.  There is also a list of the twelve brilliancy prize games. Most games have occasional notes and comments by Stoney. Game 31 is Marshall's 13 move miniature against Dus-Chotimirski. 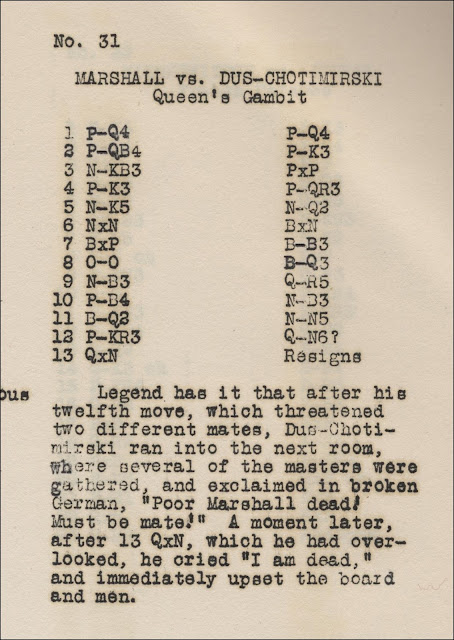 Posted by Michael Clapham at 17:46 No comments:

Limited editions of tournament and match books have been a feature of English language chess books since 1891 when The Book of the Sixth American Chess Congress, 1889, by W. Steinitz, was published in an edition of 500. This was followed by The Games in the St. Petersburg Tournament, 1895-96, by James Mason and W. H. K. Pollock, Leeds 1896 (500 copies); The Book of the London International Chess Congress, 1899, by F. W. Lord and W. Ward-Higgs, London 1900 (500 copies); and The World's Championship Chess Match played at Havana between Jose Raul Capablanca and Dr. Emanuel Lasker, by Hartwig Cassel, New York 1921 (600 copies).


Then, from the 1930's, a number of authors published series of limited editions, in much smaller numbers, frequently on past tournaments which had not previously been accorded a tournament book.

Fred Reinfeld followed soon after, publishing ten limited editions between 1935 and 1939, with five tournament books, one match book, and four games collections. Reinfeld did not state the number of copies printed for any of these, but The British Chess Magazine reported on page 314 of the July 1935 issue that his second book in the series would be limited to 150 copies. 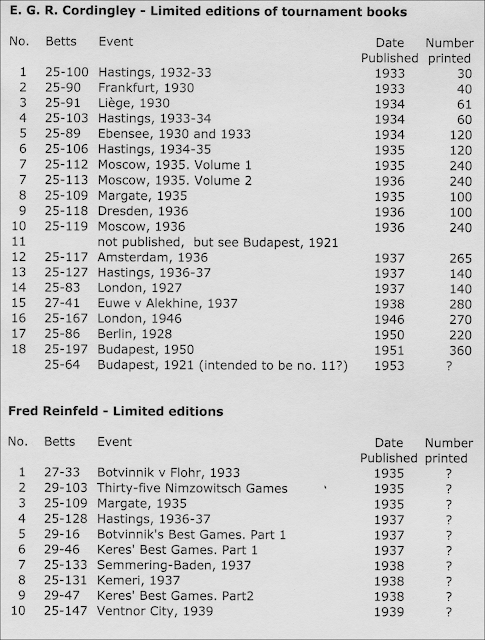 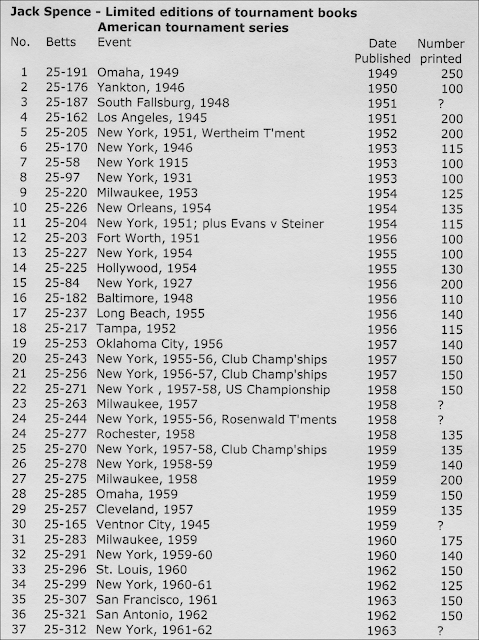 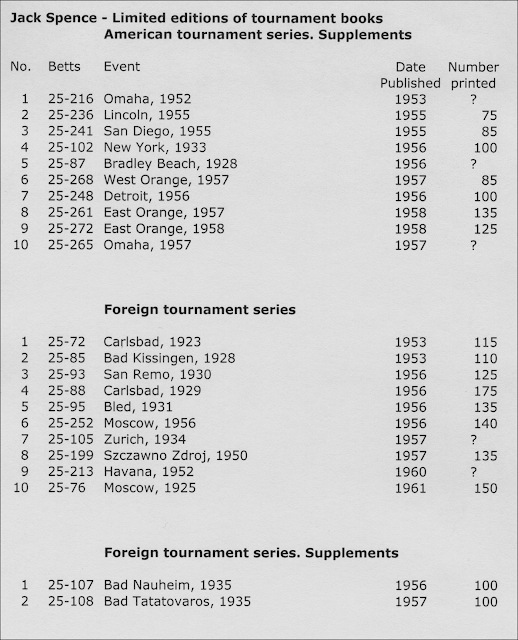 G. R. Stoney commenced a series of limited editions with  a book on Carlsbad 1911, published in 1953, however, there were no further books in this series.

Dale Brandreth issued three limited edition tournament books from 1957 to 1960, and, although not part of his limited edition series, his collection of games between Lasker and Pillsbury was limited to 700 copies.

The book on the Munich Olympiad of 1958, featuring games of the South African team, by K. Dreyer, K. Farquhar and W. Heidenfeld was limited to 400 copies. 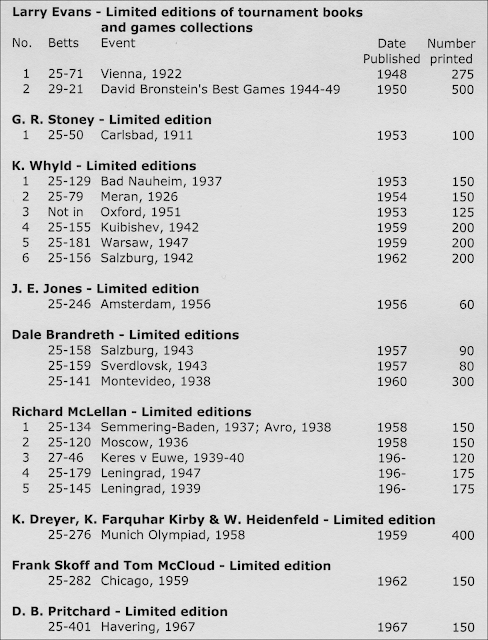 I will have a closer look at some of these limited editions next time.


There are no doubt other examples and I note that Di Felice's Chess Competitions 1824 - 1970 includes an English language pamphlet, published circa 1960, on Sverdlovsk 1942 with a limited edition of only 16 numbered copies, at 2129.1.

Limited editions continued to be published into the 1970's with books by Dale Brandreth, Tony Gillam, and probably others.


Posted by Michael Clapham at 13:29 No comments: 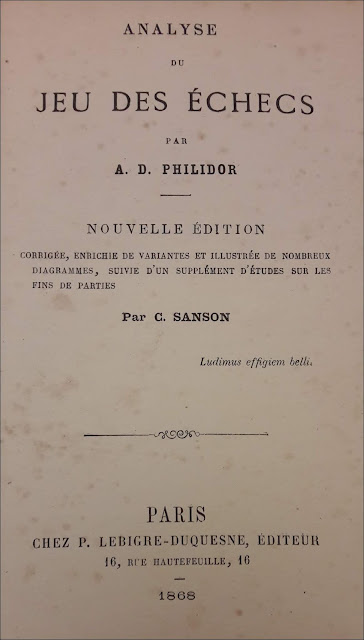 This first edition of Casimir Sanson's book is based on the 1777 edition of Philidor's Analyse du Jeu des Échecs and includes an extensive supplement on endgame studies. However, it is the 1872 edition of Sanson's book that I am focusing on here: 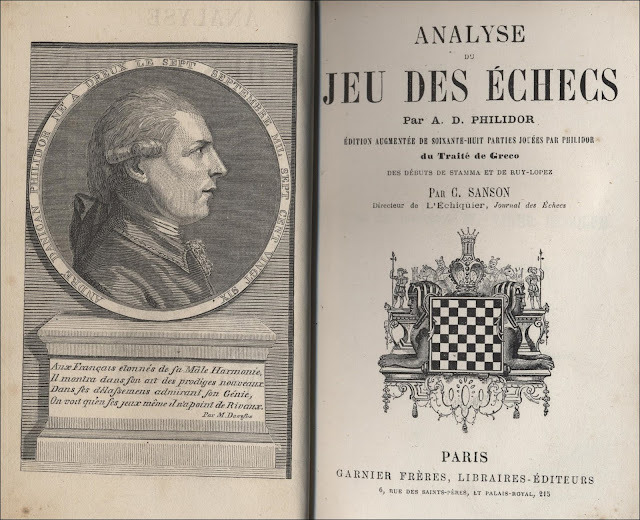 This edition, enlarged from 396 pages to 504 pages, includes 106 pages of Philidor's openings analysis, followed by the Études de Fins de Parties from the earlier edition, plus 68 of Philidor's games from the 1780's and 1790's. These are probably the 68 games recorded by George Atwood, many of which were subsequently published by George Walker in A Selection of Games at Chess, actually played by Philidor and his Contemporaries, London 1835. It is indeed unfortunate that no earlier games by Philidor survive.

The book also includes a Traité de Jeu des Échecs par Gioachino Greco with a six page Préface by Sanson and 127 pages of Greco's "games", openings analysis and a few endings. This is followed by a Traité de Stamma with 15 pages of Stamma's opening analysis and finally an 11 page Traité de Ruy-Lopez.

However, not only does this book present, in one handy volume, the openings analyses of four of the most important players and writers in the history of chess, but this tome also includes three interesting bibliographies. Firstly, a Bibliographie Chronologique des éditions publiées de L'Analyse de Philidor is given on pages 300 to 306 listing 65 works from 1749 to 1870.

This is followed by a Catalogue de la Bibliothèque de C. Sanson on pages 307 to 332, detailing 270 items, and finally, pages 470 to 472 contain a Bibliographie des éditions publiées de Greco Calabrois. 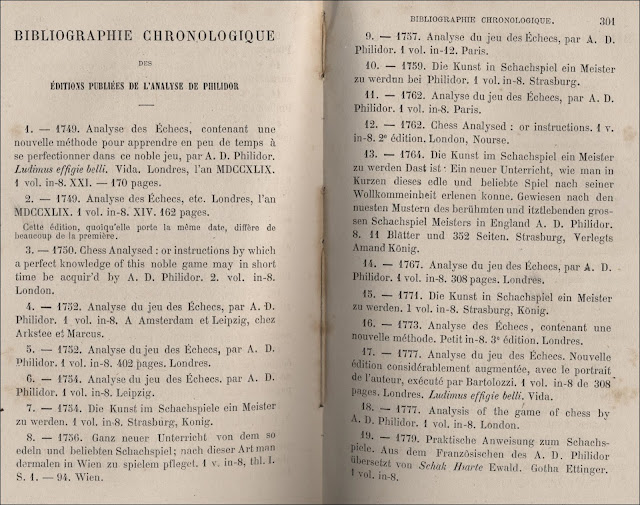 The bibliography of Philidor is incomplete, and has a number of errors, oddities and curiosities. I can make a few comments on the English books as follows:

Sanson states that the first English edition of Philidor's book, Chess Analysed, London 1750, is in two volumes, but this is just a single volume.

There is no mention of Chess Made Easy, published in several editions from 1797 to 1820, all of which included examples from Philidor, or The Elements of Chess, Boston 1805, or Pohlman's book, Chess Rendered Familiar, London 1819. Furthermore, several editions of some of the books listed are omitted, such as the 1773 and 1787 editions of Chess Analysed.

Sanson records an 1802 edition of Studies of Chess by Peter Pratt, who he persistently refers to as Peters Pratt. However, the first known edition of this book was published in 1803, which Sanson also records. 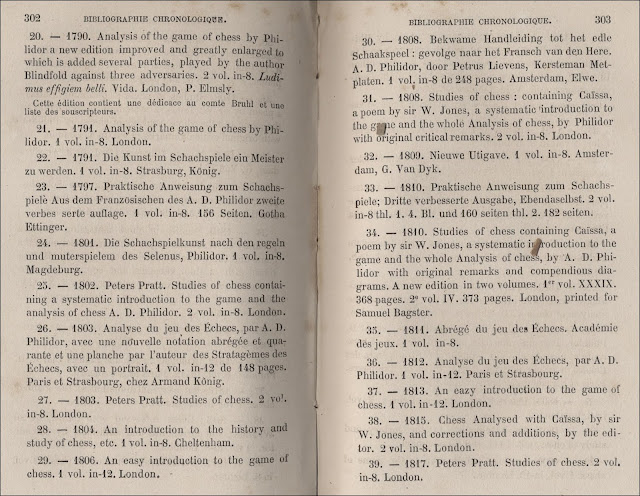 Item 38 in the Bibliographie is: 1815 - Chess Analysed with Caissa, by Sir W. Jones, and corrections and additions, by the editor. 2 vol. in-8. London. Another unknown work, this is possibly the 1814 edition of Studies of Chess.

Curiosly Sanson dates the first edition of his own book at 1869 instead of 1868, probably just a slip. 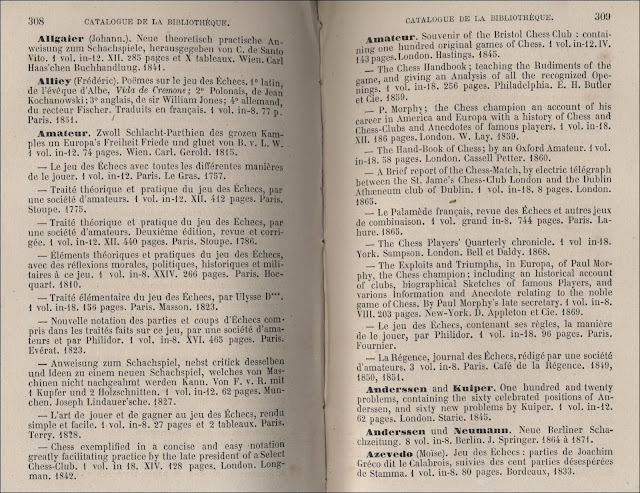 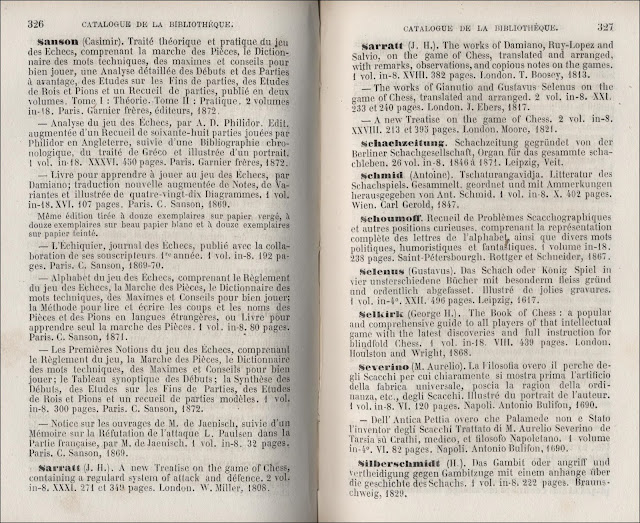 His Catalogue is a little disorganised and has several errors in names, titles etc. For example, he names the author of Chess Strategy, 1865, as Brown (Robert) of Bridport, and Emmett J. F. and Devian Fenton as authors of One Hundred Chess Games, 1865. The English edition of Max Lange's book Paul Morphy: A Sketch from the Chess World, is listed under Falkbeer but the German edition is listed under Lange. The Accomplished Chess-Player, by Roy Reuben, 1834, is listed under Franklin R. etc.

Sanson added the following note at the end of his Catalogue: 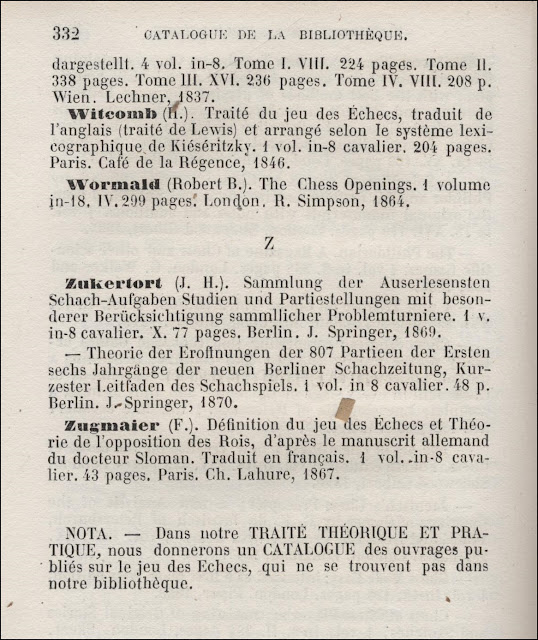 This is Sanson's revision of Traité Théorique et Pratique du jeu des Échecs, first published in Paris in 1775, and he lists his work in his Catalogue as published in two volumes (Tome I: Théorie, Tome II: Pratique) in 1872 by Garnier Frères in Paris.  However I cannot find this in any bibliographical record, although a fourth edition of this work was published in Paris in 1873 by Delarue with no mention of two volumes or C. Sanson. See LN 541 and Kieler Schachkatalog 3341. Either way, I haven't seen a copy so I do not know if this includes the list of chess publications not in Sanson's own library.


Furthermore, this list is not mentioned in Aucta, although Sanson's three other bibliographical efforts are listed at 1038, 1039 and 1040.

Casimir Sanson died in 1873 aged just 35, according to Gaige's Chess Personalia, but his edition of Analyse du Jeu des Échecs was reprinted many times over the next 60 years. I have a copy on poor paper with an imprint dated 1922 and Owen Hindle has a copy dated 1931 with attractive pictorial wrappers. 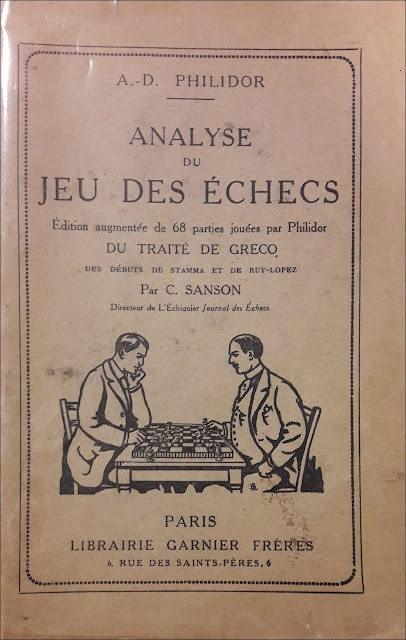 The bibliography of Greco lists 43 items from 1615 (which is almost certainly incorrect)  to 1857, including a couple of manuscript items. This compares with extensive details of twenty manuscripts and 47 books in Joseph Leon's The Bibliography of Greco in The Games of Greco by Professor Hoffmann, London 1900. Leon's list includes eight post 1857 works, indicating that Sanson's list of Greco books was fairly complete, however, Leon dismisses Sanson's list thus: "The bibliography is full of mistakes"


Other notable items in Sanson's Analyse du Jeu des Échecs include a letter from Philidor's grandson Eug. Danican Philidor dated August 1870, the Liste des Souscrivans from Philidor's first edition of 1749, and the Préfaces from both the 1749 edition and the second edition of 1777. 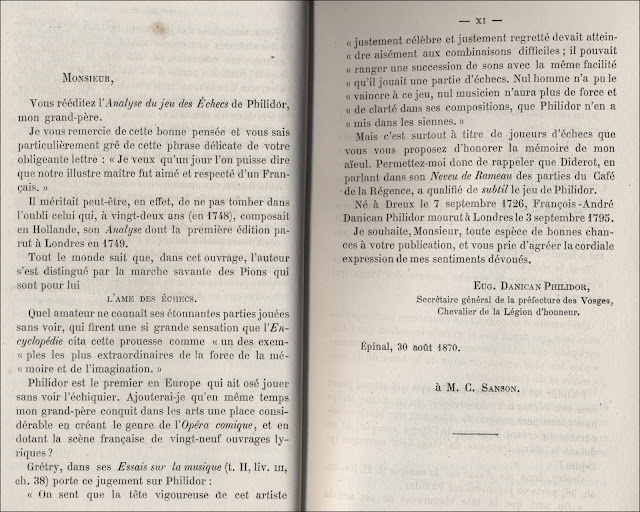 Incidentally, two uncharacteristic slips in The Oxford Companion to Chess regarding Philidor: The 1984 first edition of the Companion gives the title of Philidor's first book as L'analyse du jeu des Échecs instead of L'analyze des Echecs; this was corrected in the New Edtion of 1992. The New Edition (page 304) gives 1795 as the date of the third English edition of Philidor's book, this should be 1790.


Many thanks to Jurgen Stigter and Owen Hindle for images of the 1868 and 1931 editions respectively.

Some of the books consulted for this article:

Posted by Michael Clapham at 11:55 No comments: