This is the first of a series of articles tracing the history of chess literature in Russia and the Soviet Union. The information has been compiled from many sources, mainly in the English language; these are listed in the Bibliography at the end.

This is very much a work in progress, and further information may be added. My knowledge of the Russian language is non-existent and some of the sources give conflicting or incorrect information. Furthermore, Russian writers and historians generally praise highly their literary heritage while Western commentators are usually more measured in their views. I therefore invite comments on any errors or omissions so that a comprehensive and accurate account of Russian chess literature can eventually be completed.

The history of chess in Russia goes back over 1,000 years, but the country was a relative latecomer to the publication of books on the game. No chess manuals were printed before the 1820s and only a small number of chess books were published in Old Russia before the Great October Socialist Revolution of 1917.

Sakharov’s Chess Literature, USSR, Bibliography (1775 to 1966) lists 203 chess items plus a few periodicals up to 1917, but many of these are literary works, fiction and poems, or ephemeral items such as club reports and charters. The Catalogue of Chess Literature published in the Russian Empire, USSR and the Russian Federation, 1791 to 1992, which lists mainstream chess works,  but is incomplete, includes just 95 titles before 1917.  All chess books published before the Revolution were printed in very small numbers, generally 1,000 or less and many in editions of between 100 and 500. 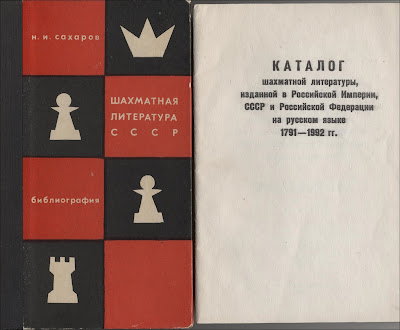 The first written mention of chess in Russia is in the Kornchaya, a 13th century document relating to ecclesiastical rules and canons. At the time the game was frowned upon by the Church and the reference in the Kornchaya is to the prohibition of chess. The Church’s hostile attitude no doubt explains why there are extremely few references to chess from the 13th to 15th centuries.

However, as Murray notes, far from being stamped out, chess flourished more vigorously than in any part of Western Europe and there are several accounts of the popularity of chess and the proficiency of Russian players, by merchants and travellers to Russia from the 16th century onwards.

This is commented on, for example, in Gustav Selenus’s manual Das Schach-oder Konig-Spiel published in 1616, and a particularly interesting account is given by the English historian William Coxe following a visit to Moscow in 1772 where he frequently encountered chess playing to a high standard.  (Chess by Twiss volume I, 1787 pages 26 and 27, also Murray’s A History of Chess, 1913, page 384)
The popularity of chess was also exhibited in the frequent references to the game in the bylini, the traditional folk epics and poems passed down by word of mouth from generation to generation. Nevertheless, there is little substance in any of these references and certainly no game scores have survived. The earliest recorded game by a Russian player in The Oxford Encyclopedia of Chess Games is dated 1838; a correspondence game between Kieseritzky and Jaenisch. It wasn’t until the late 18th century and early 19th century that Russia began publishing its own chess literature.

In 1775, A. K. Leontiev, the secretary of the Russian embassy in Peking, published a booklet in St. Petersburg; A Description of the Chinese Chess Game, which gave for the first time, the general terminology and nomenclature used in Russian chess. The Russian Academy Dictionary of 1794 also included a number of chess terms.

The first Russian book on chess was a translation of Benjamin Franklin’s Morals of Chess, published in St Petersburg in 1791, a year after Franklin's death and five years after the first appearance of this essay in The Columbian Magazine in 1786. The Russian title actually reads Rules for Draughts, but chess in Russia was often called draughts in the late 18th century and even into the early 19th century (Linder). A copy of this very rare booklet was exhibited at the Grolier Club in 1975, the catalogue stating that only a few copies were known, other copies being in Leningrad and The Hague.

Linder, in The Art of Chess Pieces, states that this was published by Russian chess players promoting a serious attitude to the game.

It was thirty years before the next Russian chess book appeared. This was the first instructional manual and was published in St. Petersburg in 1821 by Ivan Butrimov with the title O Shakhmatnoy Igrye (On the Game of Chess).


The book was a compilation of what was known about chess theory at the time and “naturally based on Western European works” according to Murray, while Richards is more precise stating that it is largely based on the German work Codex der Schachspielkunst by J.F.W. Koch. Butrimov noted the Eastern origins of Russian chess terminology and discussed the beneficial aspects of the game, where success depends on reasoning and foresight with luck playing little part. The use of algebraic notation aided the progress of chess in Russia.


Three years later another first in Russian chess literature: Shakhmatnaya Igra (The Game of Chess), by Alexander Petrov, St. Petersburg 1824. This was a more comprehensive work than Butrimov’s book and was the first Russian manual to present a thorough and original treatment of strategy and tactics.


Although dismissed by Eales as “yet another version of Philidor” it was, in fact, a book of 500 pages, written in five parts and - Linder grandly claims - “was produced after a profound study and creative reworking of all the best that was to be found in the extant chess literature.”

The third part of the book contained Philidor’s games, with extensive commentary by Petrov who was critical of some of Philidor’s views. Petrov had a deep understanding of chess and wrote intelligently on the game, emphasising the importance of study and endeavour to become proficient.  He put forward several important propositions, carried out significant analytical investigations and advanced the theory of the game. 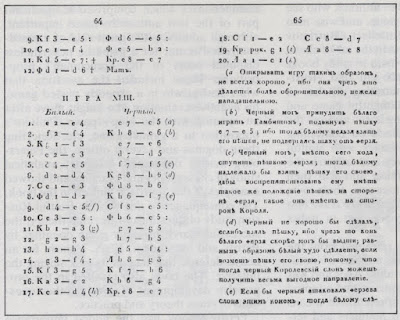 Petrov’s book stimulated the study of opening theory and laid the foundations for the Russian school of chess. Later authors claim that the book was “rated very highly by contemporaries and it became a reference for several generations of Russian chess players” (Linder), and: “the book was extremely popular and was considered a model chess guide” (Kotov & Yudovich). However, only 300 copies were printed, (of which around 50 have survived), so its influence must have been limited.

Petrov, the first Russian chess master, was an associate of Butrimov and served in the chancellery of His Imperial Majesty. He wrote a number of short stories with chess as a theme including Scene from the Life of Chess Players, and also the first Russian manual on draughts.

Petrov's book was reprinted in Moscow in 1977: 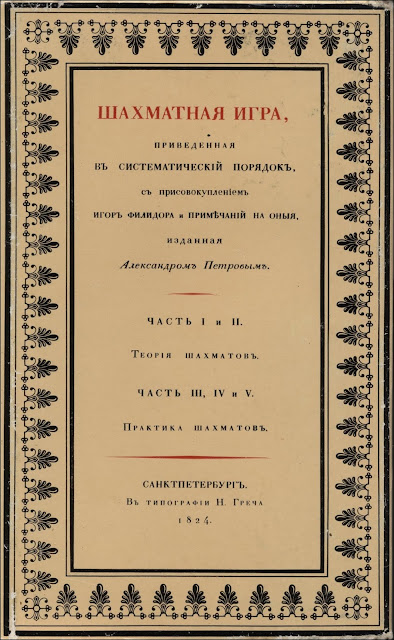 Also published in St. Petersburg in 1824 was: Recueil de parties d’ échecs by M. Bendix. Written in French, this was a collection of games and endings. The book also included the rules of the game, adopted by the London Chess Club. (Sakharov 78)

A basic primer of 39 pages was published in Moscow in 1828; The Rules of the Chess Game, (Sakharov 3). No author is named. This gave the arrangement and movement of the chess pieces, the aim of the game, notation, general notes on the conduct of the game, and a game between Philidor and Count Bruhl.

The next major contributor to Russian chess literature was the chess master and theoretician Carl (Charles?) Friedrich (Ferdinand?) von (de?) Jaenisch, referred to in some Russian sources as Karl Andreyevich Yanish. He was born in Finland, probably of German ancestry, but spent most of his life in St. Petersburg where he was employed by the Institute of Communication Engineers (Railways?).

Jaenisch was a frequent guest of Petrov and together they collaborated on research into the chess openings. In 1840 Jaenisch left the Institute to concentrate on his chess activities and published his major work Analyse Nouvelle des Ouvertures du Jeu des Échecs in two volumes in 1842 and 1843. The work was written in French and published in St. Petersburg, but also distributed in Paris, London and Leipzig.

Again, there are differing views of this work - Kotov & Yudovich describing it as the first scientific manual on openings with much original analysis, written in co-operation with Petrov, which served as the basis for many later openings manuals including Bilguer’s Handbuch des Schachspiels. However, Eales says it is “still much under the influence of Philidor”, and Murray merely states that Jaenisch and von der Lasa helped one another with their respective books; Analyse Nouvelle and the Handbuch, which both came out at a similar time.

Staunton acknowledged Jaenisch's important discoveries, in the Preface to his Chess-Player's Handbook in 1847, and English editions of Analyse Nouvelle were published in 1847, 1852 and 1855, but there was no Russian language edition.

Jaenisch wrote further chess books, which were published in French in St. Petersburg, including Decouvertes sur le Cavalier aux Échecs, 1837, a treatise on king and knight versus king and pawn endings, and Traité des applications de l’analyse mathematique au jeu des Échecs, 1862-1863, a three volume work on mathematical analysis of chess, which he was unable to complete (Kotov & Yudovich).

Jaenisch, the strong chess player, openings analyst, problem and endgame composer, chess columnist, match organiser and chess club founder was the veritable Staunton of St. Petersburg. He contributed many articles to European chess periodicals on Russian chess history, chess openings and problems; he challenged the Paris Chess Club to a correspondence game and tried to arrange a match between La Bourdonnais and Petrov, unfortunately, neither of these occurred.

Along with Petrov and Shumov, Jaenisch was invited to the London 1851 and Paris 1867 tournaments, none was able to compete in either, but Jaenisch, arriving too late for London 1851, did stay to play a match with Staunton, losing 7 to 2 with one draw; this is the first record of a Russian playing a match abroad.

Jaenisch and G.A. Kushelev-Bezborodko, one of the richest men in Russia, established the St. Petersburg Chess Club in 1853. This attracted up to 100 members including many prominent figures in Russian culture. Jaenisch was elected secretary and drew up a set of rules and regulations, which he published, again in French, in 1854 under the title: Regles du jeu des échecs, adoptées par la sociéte des amateurs d’échecs de St. Petersburg. He published a revised charter in 1858 in both French and Russian. These were the first Russian chess codes and clarified many of the previously disputed rules.

The 1850s saw much greater communication between Russian chess player's and the rest of Europe, and this stimulated an increase in the publication of chess books in the second half of the 19th century and the launch of several chess periodicals. These will be looked at in the next article.

Bibliography and main sources of information