I have just returned from a trip to Devon and Dorset where I acquired 25 or so chess books from book shops, two book fairs and specialist dealers Bob Jones of Keverel Books in Exmouth and Michael Sheehan of Caissa Books in London. Here are brief details of a few of these: 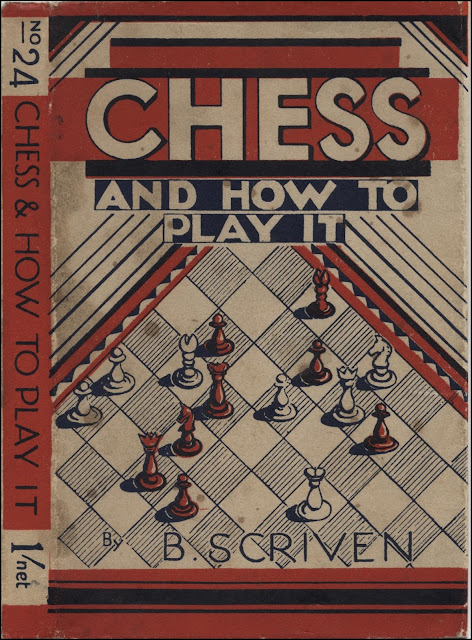 This book for beginners has been discussed several times in Edward Winter's Chess Notes  where it has been described as Scriven's parvum opus. The book concludes with eight illustrative games including The Immortal Game between Anderssen and Kieseritzki with a note that this was "a recent County Championship game". A Game by Staunton is given on page 83 with no information on the occasion or opponent. 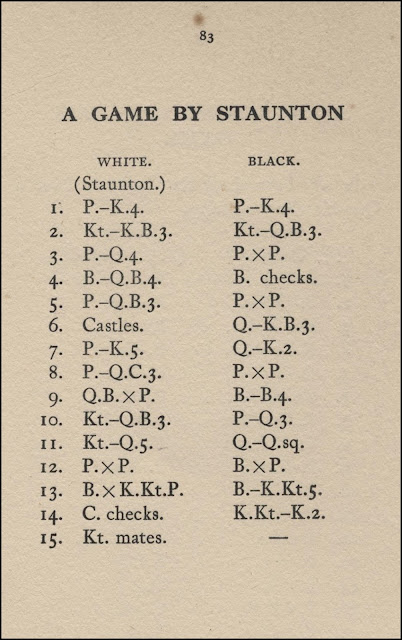 This is Staunton's first game against Alfred Brodie in the first round of The Chess Tournament of 1851. Brodie was a provincial player drafted in as a late replacement for Schumoff, of St. Petersburg, who failed to appear, and Staunton graciously included the following note on page 15 of The Chess Tournament, London 1852, following his second and concluding win over Brodie: 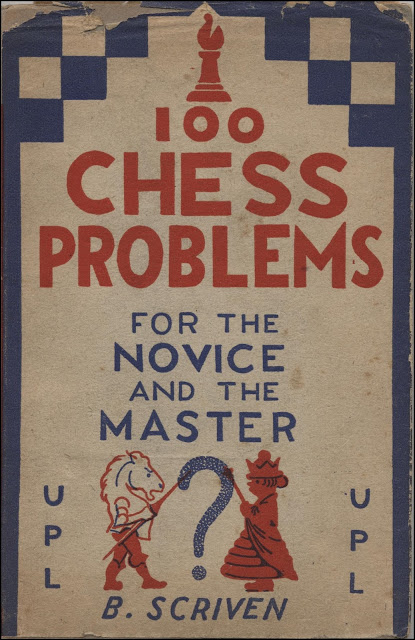 He also wrote a book on Draughts and Dominoes. 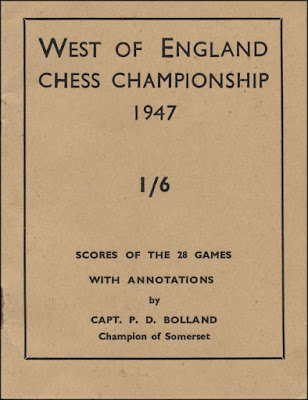 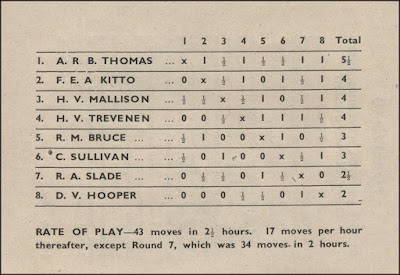 Note the unusual rates of play.

David Hooper, co-author of The Oxford Companion to Chess was another competitor and here is a photograph of Thomas in play against Hooper at the event. Thanks to Bob Jones of the chessdevon website for this photograph which is included in a comprehensive biograhy of A. R. B. Thomas. 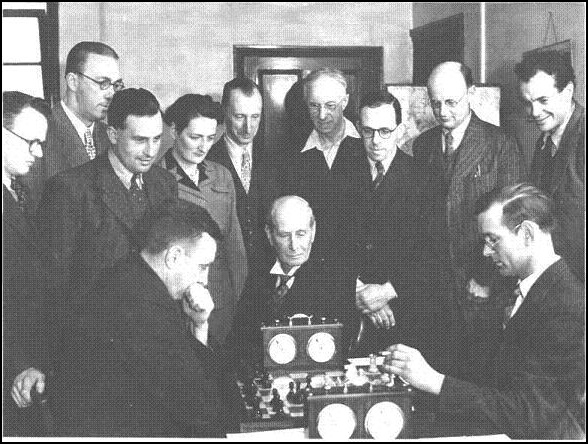 Above: The competitors at the 1947 WECU Championship, showing A.R.B. Thomas on the left in characteristic pose playing against D. V. Hooper, with the owner of the restaurant venue looking on.

Chess: Its Theory and Practice; to which is added a Chapter on Draughts, by Captain Crawley, London 1858. 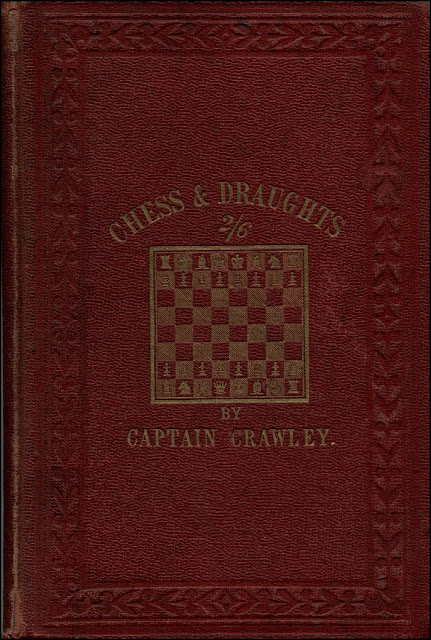 This is a very nice copy, with all edges gilt, of the first edition of George Frederick Pardon's first chess book, issued under his pseudonym; Captain Rawdon Crawley. The first edition has 180 pages compared with the 191 pages of the fourth edition examined by Betts for his Bibliography. In his Preface, the author acknowledges his indebtedness to Staunton, "the prince of chess", Lewis, Walker and other authorities in preparing this volume. The material had previously appeared in Review, The Country Gentleman's Journal. 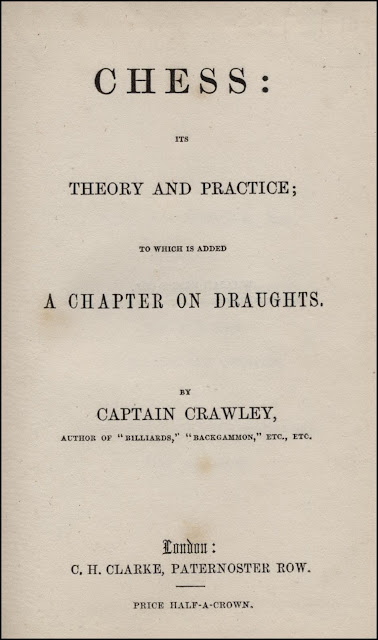 G. H. Pardon had previously written books on billiards and backgammon, and in 1860 he issued another small chess primer; A Handbook of Chess,  the content of which was written for the London Journal. 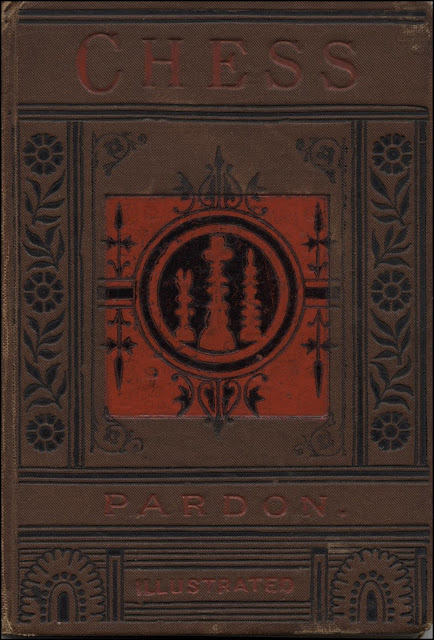 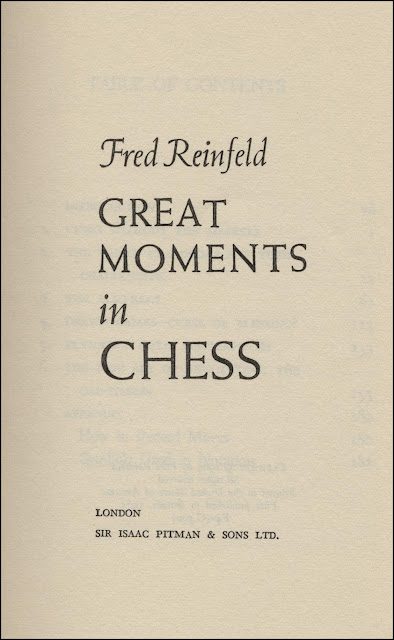 Another extraordinary work by the industrious Fred Reinfeld, (and one of his last). In less than 200 pages he packs in the following:

Chapter 1. Chess Without the Masters. Covering the period up to around 1750, Reinfeld gives a brief history of chess and reviews the chess literature up to the time of Philidor.

Chapter 2. The World Champions and their Challengers. Reinfeld discusses the differences between world champions and also-rans, suggesting that determination accounts for the fine line between success and failure. He then briefly details the careers of Philidor, Labourdonnais and McDonnell, Anderssen and Morphy (no mention of Staunton), Steinitz, Lasker, Capablanca and Alekhine, with representative games of each and more references to early chess literature.

Chapter 3. The Also-rans. Here Reinfeld discusses various players of similar ability to the world champions but who never quite claimed the title. These include Zukertort, Tchigorin, Tarrasch, Pillsbury, Schlechter, Marshall, Janowski, Maróczy, Rubinstein, Tartakover, Nimzovich, Bogolyubov and Réti, with samples of their play.

Chapter 4. Drawn Games - Curse or Blessing? Reinfeld expresses his disapproval of "the notorious grandmaster draw" and gives as an example "the following obnoxious specimen": 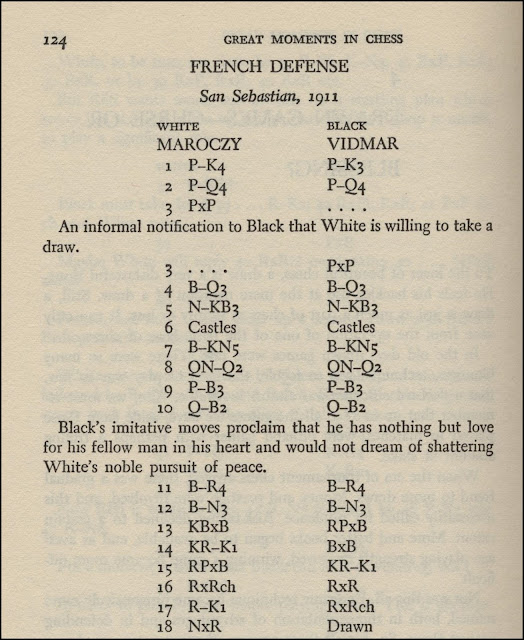 Chapter 5. Blindfold Chess Masterpieces. Reinfeld was in awe of blindfold play and in this chapter he quotes from an article that he wrote for his earlier book Treasury of Chess Lore, about the mechanics of the process, before giving classic blindfold games by Morphy, Blackburne, Zukertort, Pillsbury, Alekhine, Koltanowski and Fine.

Chapter 6. The Fine Art of Annotating: The Old-Timers. In this final chapter Reinfeld discusses the considerable improvement in annotating over the last 150 years (up to the 1960's). He claims that early writers  contented themselves with comments of a general nature which were not necessarily enlightening. Here he brings in Staunton, stating that, having done badly in the Chess Tournament of 1851, he took his revenge in the annotations in his book on the event, and gives a number of examples. Morphy's annotations on the Labourdonnais  v McDonnell games in the New York Ledger are "only fair by present-day standards" but "they are a miracle of clarity and precision in comparison to other nineteenth century annotators"

Blackburne's annotations are "in the nature of vague generalisations, conversational in character, he might as well be remarking that "it's rather mild for January"". However, Steinitz "really initiated the modern school of annotation". Reinfeld gives two examples of Steinitz's fine analysis and notes, and, by the by, states that he was the first master to insist on the general superiority of Bishop over Knight.

Tarrasch; "one of Steinitz's outstanding disciples, became an even finer annotator", and his only rival in this field was Georg Marco. Reinfeld finishes by lavishing praise on two books from the 1920's: The Book of the New York International Chess Tournament, 1924 in which Alekhine's annotations "on which he is said to have spent a whole year, set a hitherto unknown standard"; and Schachkongress Teplitz-Schönau, 1922, about which Reinfeld declares "there are those who think that this masterpiece of Grünfeld and Becker is the greatest work of annotating that has ever been seen."

A wonderful book in its own right while prompting the exploration of many other chess works, and all this for £5. 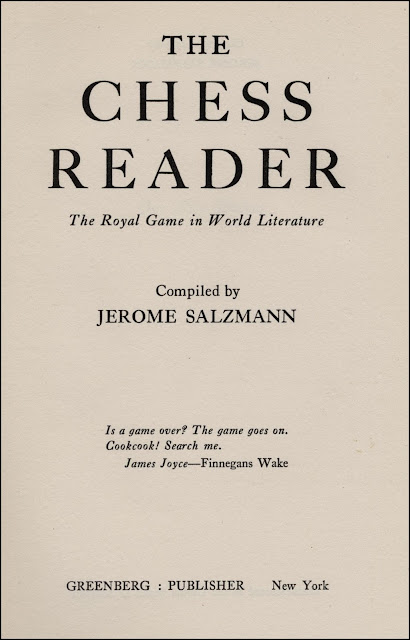 This copy is from Leonard Reitstein's library. 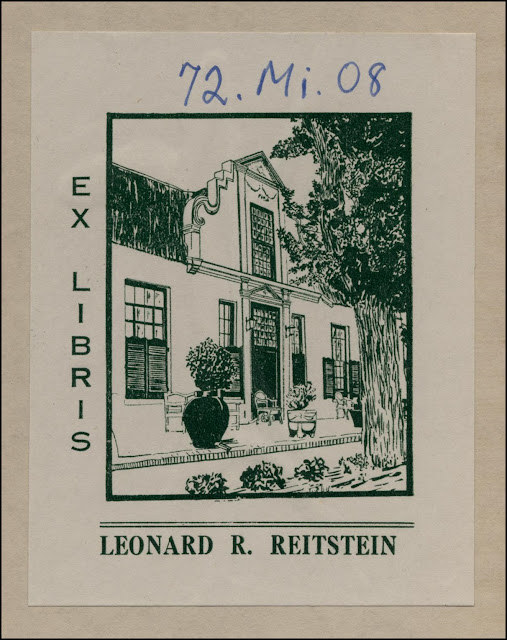 Posted by Michael Clapham at 21:33 No comments:

One hundred years ago

1918 saw the end of The Great War during which, it seems, chess book publishing virtually ground to a halt. I can find only five new chess books published in English in 1918. I have not checked extensively for non-English works but, judging by the lack of book reviews in the main chess periodicals of the time, they were also thin on the ground. (Bernhard Kagan published pamphlets in 1918 on the two Berlin tournaments held that year and another on the match between Rubinstein and Schlechter also held in Berlin in 1918, and a pamphlet was published in 1918 by Curt Ronniger on the Kaschau International Tournament held in August 1918.)

The five works in English were as follows:

Not entirely new, but considerably enlarged, and with a new title, compared with previous editions. Page 9 of The Chess Amateur for October 1918 carried an article by E. E. Cunnington, the co-author with W. Moffatt, outlining the evolution of their Chess Code, which was first published in 1894, and the great lengths they went to, along with W. P. Turnbull, in preparing this work.

However, both The Chess Amateur and The British Chess Magazine published decidedly critical reviews of this book, claiming that it was unnecessary and carried little weight, as the generally accepted laws of the game had been published by the British Chess Federation in 1912. The review in The Chess Amateur is on page 2 of the October 1918 issue and is taken from Times Weekly. The unsigned BCM review, probably by the editor I. M. Brown, is on page 295 of the October 1918 issue.


2. Chess and Checkers: The Way to Mastership, by Edward Lasker, New York and London. 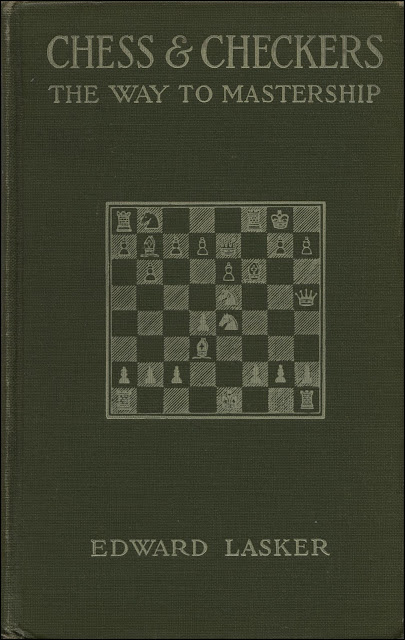 This is a more elementary treatise than Lasker's previous work Chess Strategy, first published in English in 1915. The chess section takes up 222 of the 284 pages and includes chapters on The Rules of the Game, Elementary Tactics, General Principles of Chess Strategy, and two Illustrative Games, annotated at length; a win by the author against Jackson Showalter and a loss to Capablanca. Finally a chapter on Problems outlines the art of problem composition with a few examples.


In his Introduction, Edward Lasker lists 16 leading players of the day in approximate order of strength, a matter picked up by The British Chess Magazine when reviewing this book on pages 110-111 of the April 1919 issue. The BCM berated Lasker for omitting Blackburne, Atkins and Gunsberg from the list of players of international fame. However, by 1918, Blackburne and Gunsberg, if not Atkins, were surely past their best. 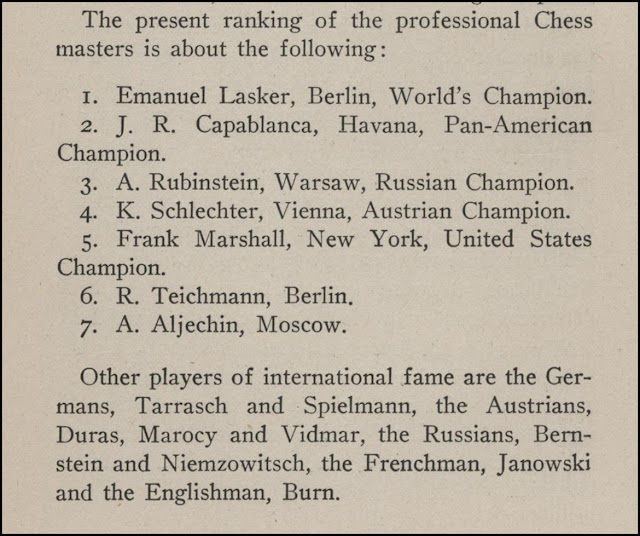 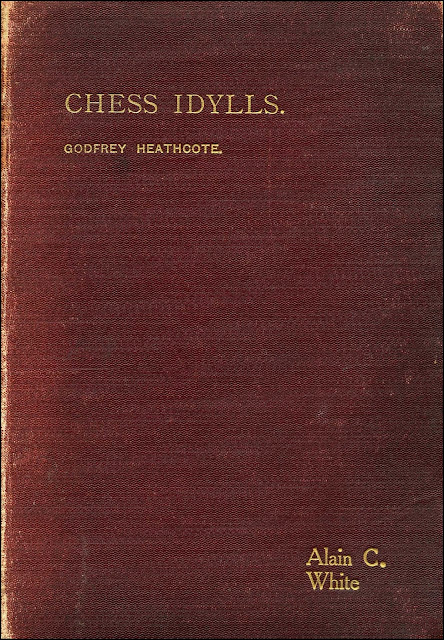 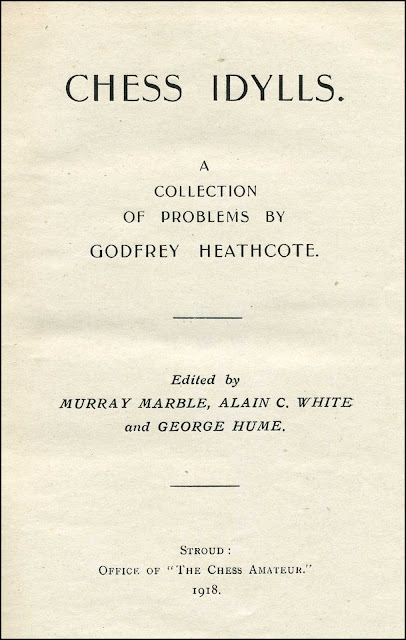 Alain C. White had "hearkened to the call of his nation's exigencies and was engaged on national duties" (BCM February 1918 page 45), but, nevertheless, was able to continue with his annual Christmas Series productions, and devoted this volume to the compositions of England's foremost composer Godfrey Heathcote.

Although persistently advertised as Alain C. White's 1919 book in The Chess Amateur, this was in fact issued to recipients in time for Christmas 1918. 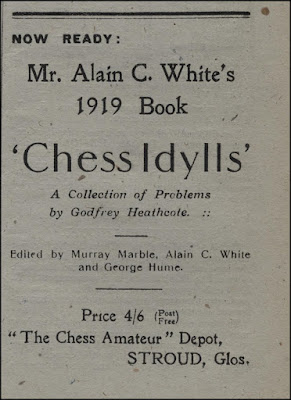 This scarce eleven page pamphlet brings together four articles published in the BCM in September to December 1917 dealing with complex problems described as "synthetic self-mates in which White does not check or capture, and Black does not move except to check".

Finally, here's one you haven't got:

5. History of Chess in Queensland, by W. A. Smith, Brisbane.

According to The Chess Literature of Australia and New Zealand, 4th Edition, by John van Manen, Belgrade 2011, this history of the Queensland Chess Association was compiled by its secretary, W. A. Smith, and read at a meeting of the Association in January 1918. The lecture was subsequently printed and a copy sent to every member.

So, putting aside the revised book of rules, Locock's weird pamphlet and the talk on Queensland chess, there were just two chess books of substance published in English in 1918; Edward Lasker's book for beginners and Alain C. White's annual offering of problems. This seems quite extraordinary compared with the torrent of chess literature in recent years.

With this paucity of new chess literature it was largely left to the chess periodicals and chess columns to keep the flag flying and to provide regular sustenance for chess enthusiasts. In America, the American Chess Bulletin and The Good Companion Chess Problem Club were both produced throughout the war, while in England, The British Chess Magazine, The Chess Amateur and the British Correspondence Chess Association Magazine were published continuously at this time. However, this was not without considerable difficulties due to the lack of chess material, interrupted postal services, paper shortages and increased costs etc. 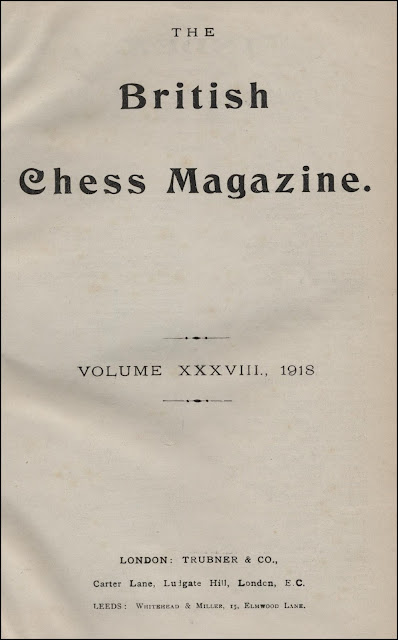 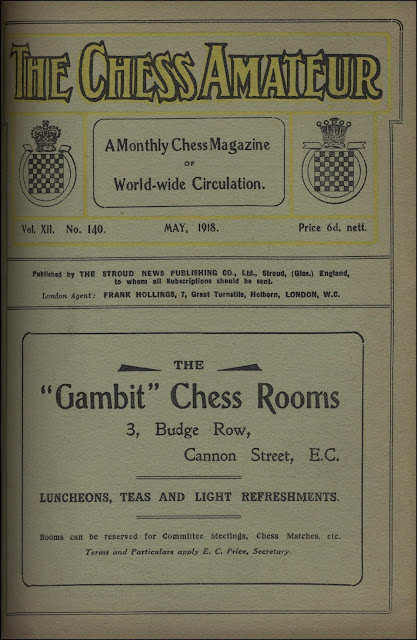 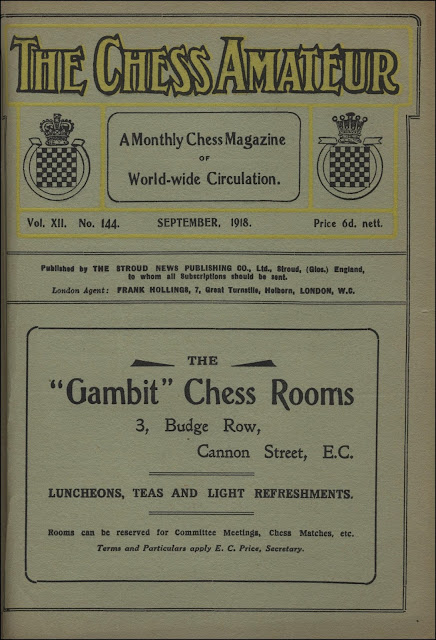 One periodical was actually launched in 1918; The British Columbia Chess Magazine (later The Canadian Chess Magazine, Betts 7-61, Chess Periodicals 427), the first copy of which was published in December 1918.

The Chess Amateur for March 1918 included this Blackburne Bon-Mot on page 162:

Posted by Michael Clapham at 16:30 No comments: