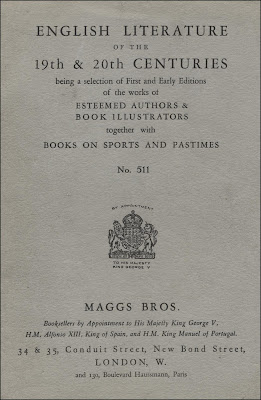 The catalogue of English Literature of the 19th & 20th Centuries...together with Books on Sports and Pastimes, issued by Maggs Bros. in 1928, contained 428 pages listing 2,526 items. There are only three chess books but each is a rarity.

Item 2374: The Pleasaunt and wittie Playe of the Cheasts renewed, with Instructions both to learne it easely, and to play it well. Lately translated out of Italian into French: And now set furth in Englishe by Iames Rowbothum, London 1562.  £82

This is the very rare English translation of Damiano's Questo Libro e da Imparare Giocare a Scachi first published in Rome in 1512. This Italian work was translated into French by Claude Gruget and published in Paris in 1560 with the title Le Plaisant Jeu des Eschecz, and Rowbothum's book was taken from the French translation. 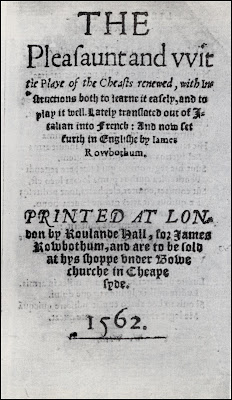 The following page from Rowbothum's book shows the clumsy notation in use at the time. 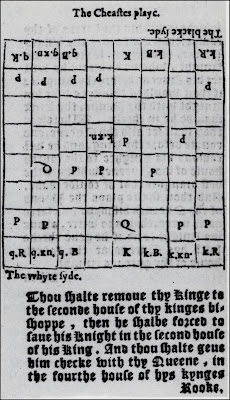 Richard Eales claims in his Chess: The History of a Game that, although Rowbothum was usually thought to have been the translator, it was more likely William Ward, who wrote the prefatory verses. However, Chess Texts 1562:1 by Whyld and Ravilious, state that the translation is believed to be by Ralph Lever the author of a book on the philosopher's game.

J. A. Leon gave a detailed description of this work in The British Chess Magazine for November 1894 on pages 434-437.

Item 2375: The Royall Game of Chesse-Play: Sometimes the Recreation of the late King, with many of the Nobility. Illustrated with almost an hundred Gambetts. Being the study of Biochimo the famous Italian, London 1656. £3 10s

This was the first publication in book form of Gioachino Greco's games which had previously only been available in manuscripts. Francis Beale was the editor and, Richard Eales, in his aforementioned History, states that Beale augmented Greco's games, which were given as in the manuscripts with almost no notes or explanations, by adding a much more elementary introduction taken largely from The Famous Game of Chesse-play by Saul/Barbier; an edition of this work had "recently" been published in 1652. 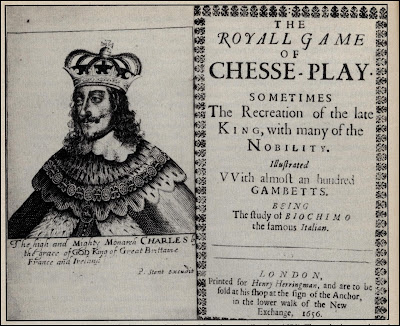 The inclusion of a portrait of King Charles I as a frontispiece was a strong political statement by the royalist supporters involved with the production of the book. King Charles I had been executed in 1649, following which the English monarchy was abolished, and a Commonwealth of England was declared with Oliver Cromwell as Lord Protector. The monarchy was restored by Charles II in 1660. Many copies of this book had the portrait removed for fear of reprisals. 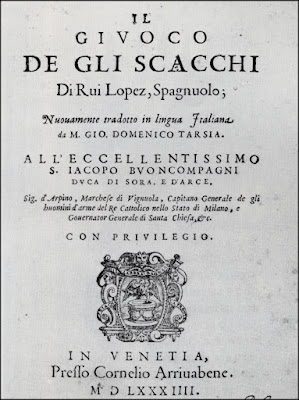 The variant spellings of Gombito and Gobito on page 133 of this work are of bibliographical interest.

Item 2376 in the Maggs Bros. catalogue is, coincidentally, the work by Ralph Lever referred to above; The Most Noble , auncient and learned playe, called the Philosophers game, invented for the honest recreation of students, and other sober persons, in passing the tediousness of tyme. London 1563. £24

Interestingly, this book was published by James Rowbothum who also wrote the dedication to Robert Dudley, Earl of Leicester, in 37 4-line stanzas.

While not related to chess, the philosopher's game or rithmomachy was  an arithmetical game played on a double chess board.