Here is a further selection of books acquired last year:


The Problem Art, A Treatise on How to Solve and How to Compose Chess Problems by T. B. and F. F. Rowland, second edition, New Barnet and Kingstown 1897. 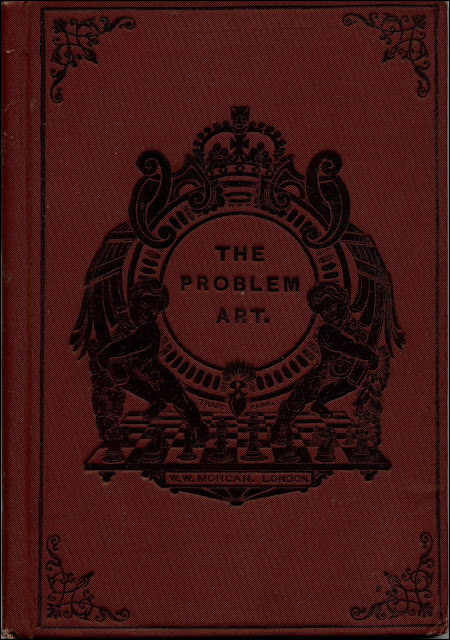 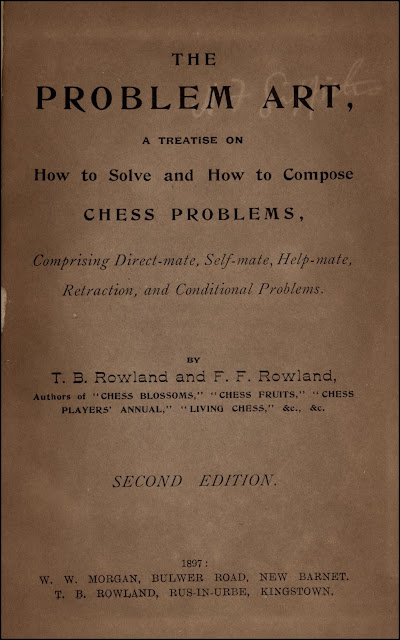 The first edition was published in Dublin in 1887 and this is an expanded version of that work. The  authors state in the Preface; "up to the year 1886, there was no known work on the Art of Solving, whilst those on Composing were few."

However, A Complete Guide to the Game of Chess by H. F. L. Meyer, published in 1882, has a short section entitled The Solving of Problems. The main work, in English, on the art of composition before 1887 was Samuel Loyd's very scarce Chess Strategy: a treatise on the art of problem composition, Elizabeth (N. J.) 1878, while Meyer's book also has another short section on Methods of Composition. 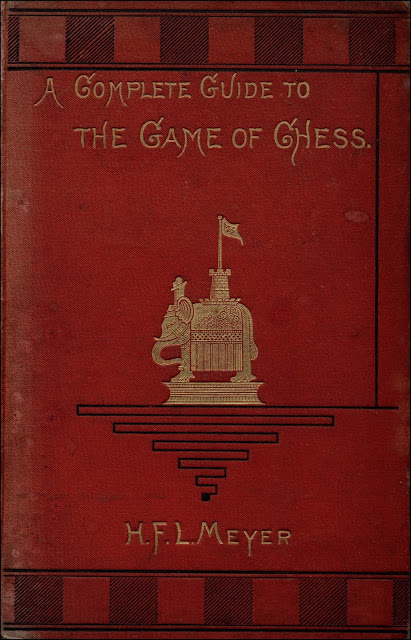 The Problem Art is an instructional work on problem composing and solving with around fifty problems sprinkled throughout the text to illustrate various matters.

W. W. Morgan published the second edition and at the back is an advert for the series of pamphlets in Morgan's Shilling Chess Library. This lists the first twelve of the series, a thirteenth was published in 1901 - A Selection of Games from...Monte Carlo, 1901. Book XI in this series was titled Blindfold Play. 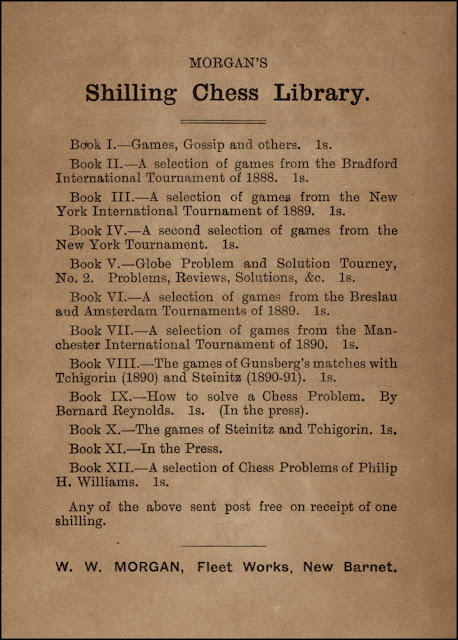 All of these pamphlets were very cheaply produced and quickly became quite fragile. Consequently few have survived and original copies are scarce and difficult to find today. 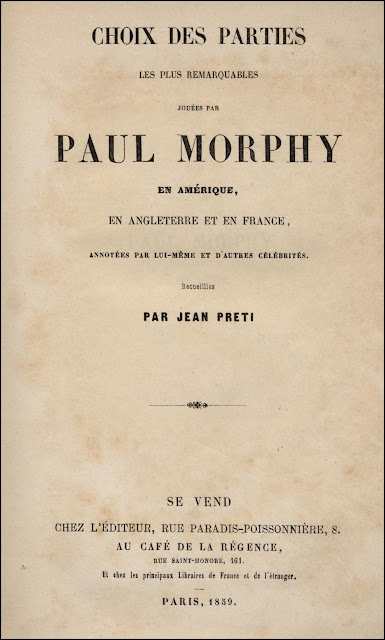 This was one of a number of collections of Morphy's games published in 1859, shortly after his triumphant visit to Europe; others were by Dufresne, Frere, Lange, and Stanley. Frederick Edge's book on Morphy and D. W. Fiske's Book of the First American Chess Congress were also published in 1859. However, the first collection of Morphy's games was a 12 page pamphlet by Juiste Opgaaf: van twee merkwaardige partijen gespeeld door Morphy, benevens bizonderheden uit zijn leven published in 's-Gravenhage in 1858.  This translates as Two remarkable games played by Morphy, in addition to particulars of his life, published in The Hague in 1858. The periodical Chess Monthly, edited by Fiske and Morphy, also included some of Morphy's games in 1858. 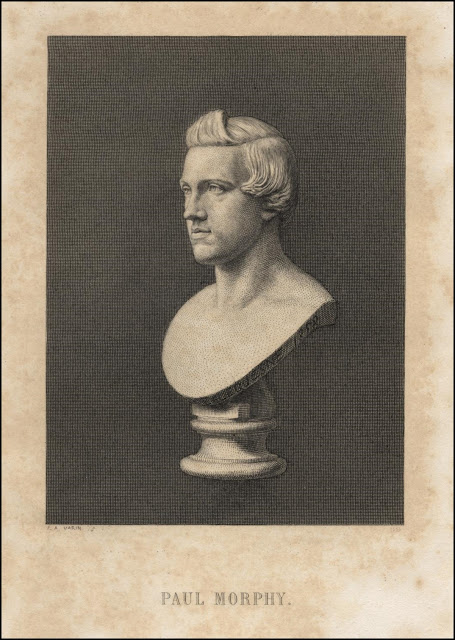 The book includes 107 games arranged in four chapters for games played in America, England, France and games played after departing Paris. Notes to the games were taken from various sources, usually noted at the end of each game, including some of Morphy's own remarks, taken from Chess Monthly. 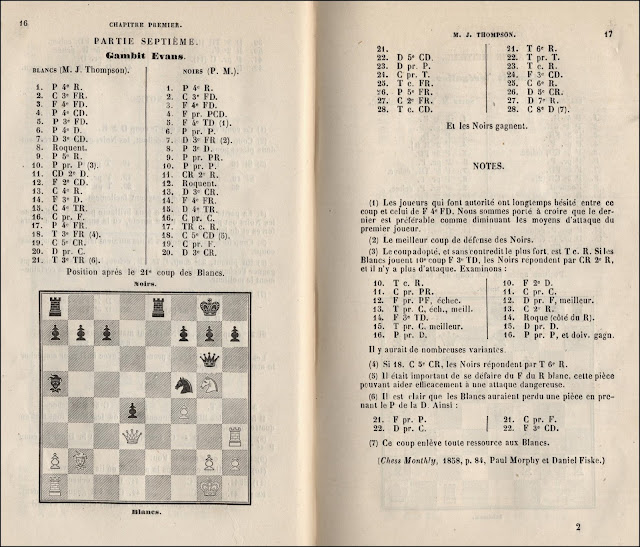 All Change Here!, A Treatise on the Change-Mate Two-Mover together with A Collection of 325 Examples, by Philip H. Williams and Raymond Gevers, Stroud 1919. 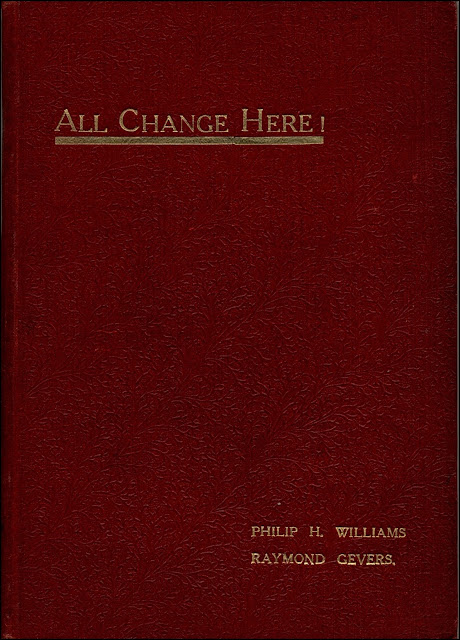 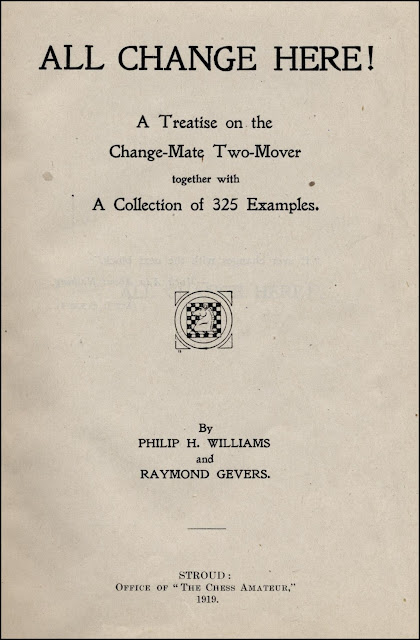 This is one of the few chess titles to include an explanation mark!

This book was produced very much in the style of Alain C. White's Christmas Series, and, indeed, Philip Williams acknowledges A. C. White's interest and assistance in the project, and dedicates the book to him.

This is a collection of 325 two-mover change-mate problems by 105 different composers. The idea is that black is in zugswang, so white makes a key waiting move and mates after any black reply. Each position is also a mate in one for white if black moved first. Williams succinctly described this problem in duplicate as "a return ticket for a single fare". 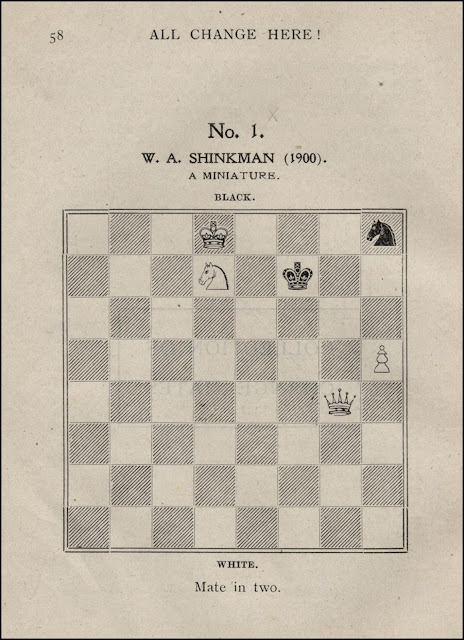 The problems are arranged in order of the number of men employed, and problem 1 by W. A Shinkman, with six men, was thought at the time to be the only miniature change-mate in existence. Problem 325 has 25 men, getting on for a full complement. 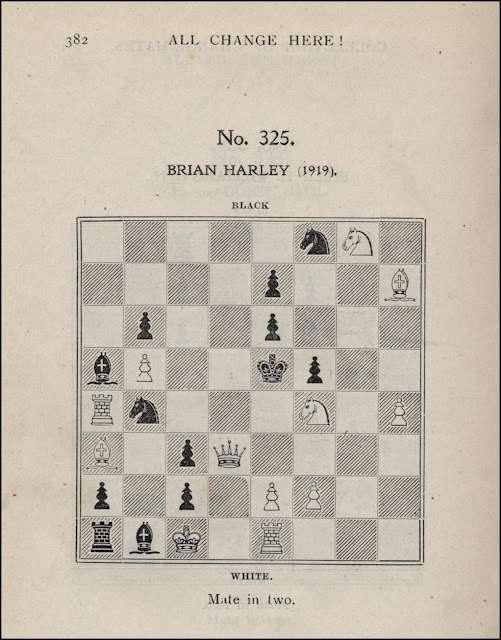 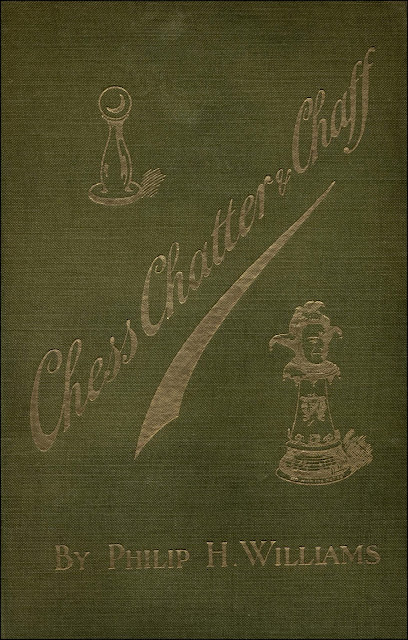 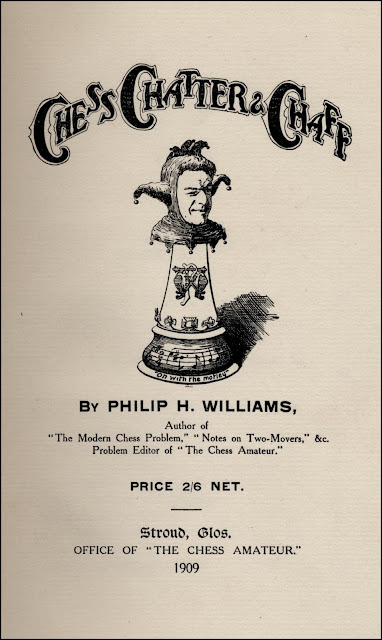 This unusual book by Philip H. Williams, the problem editor of The Chess Amateur and author of three books on chess problems, is predominantly a literary work being a collection of chess stories, articles, anecdotes, essays and poems by the author. These were written in a humorous and jocular style, and, while much of this is still amusing, some of the content now just seems silly. There is also some discussion of chess problems with 50 examples. 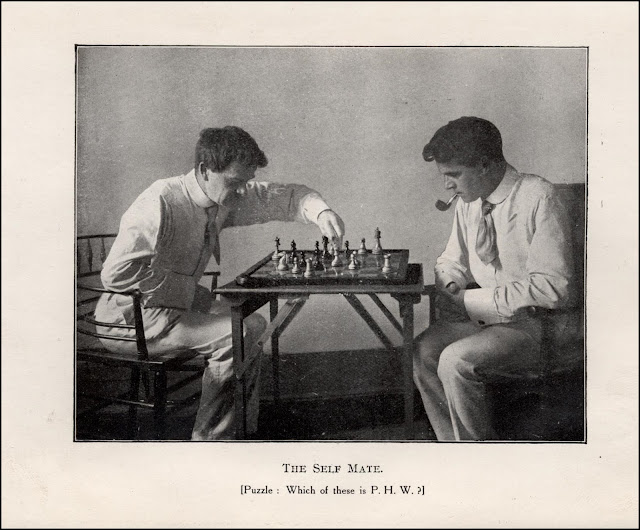 Photography was another of the author's interests, and Williams took the opportunity to include several of his own photographs, including some countryside views and three shots of the interior of Ely Cathedral!

The article A Pseudo-Scientific Analysis is a clever parody of the works by Franklin K. Young. 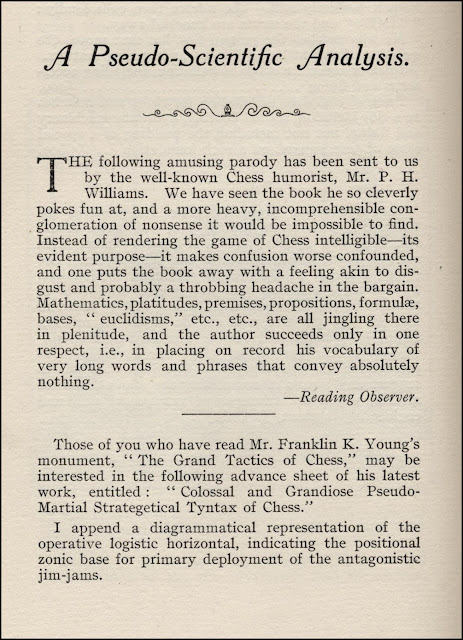 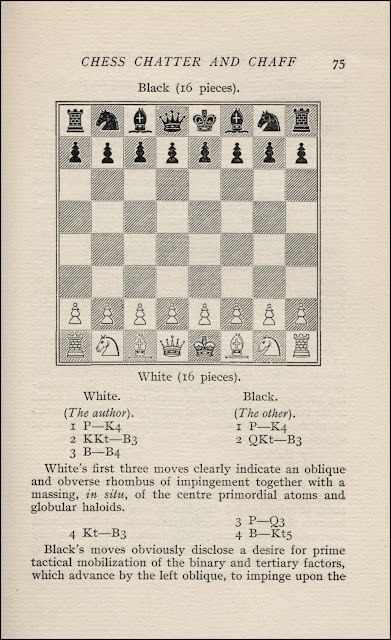 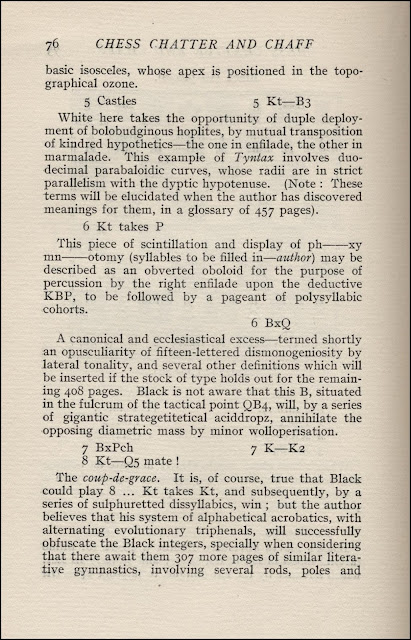 A section of spoof adverts completes the book, for example: 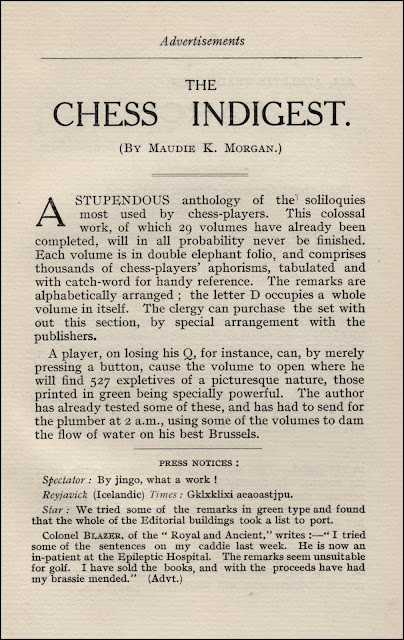 Finally, images of a few others bought last year. 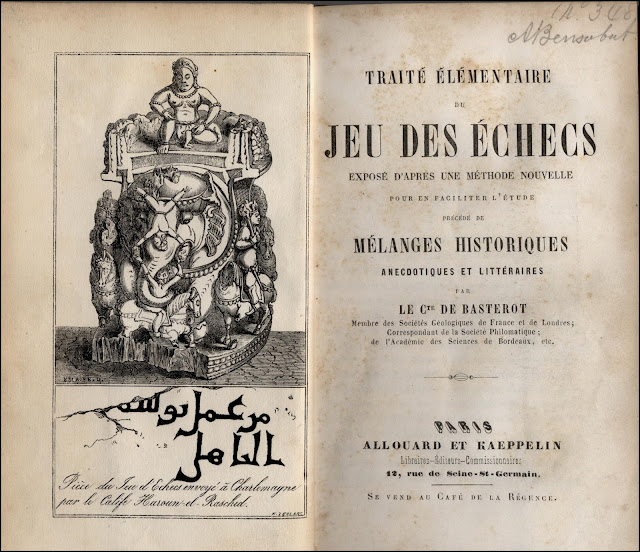 The Incomparable Game of Chess, by J. S. Bingham, London 1820 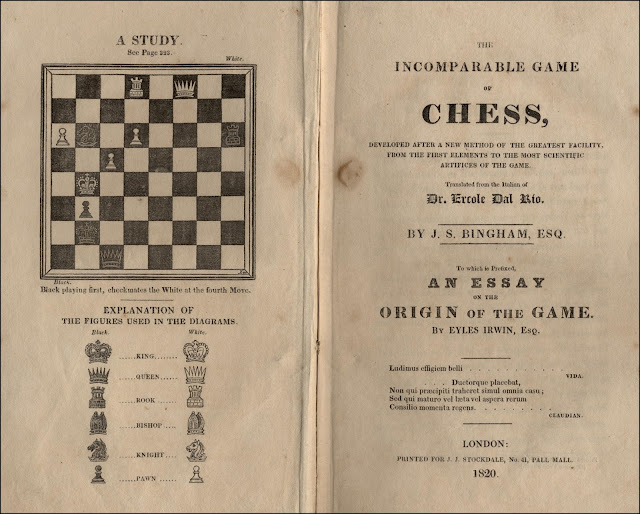 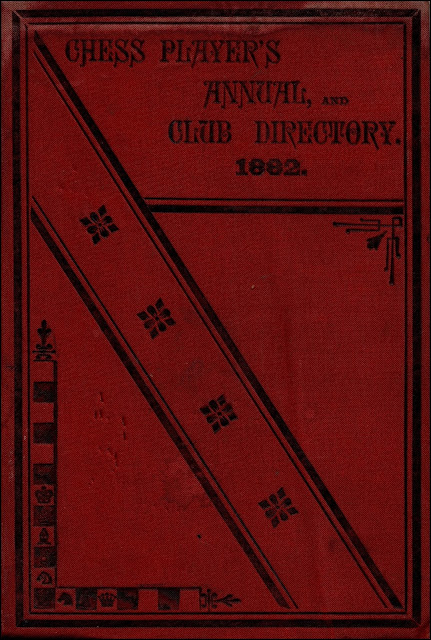 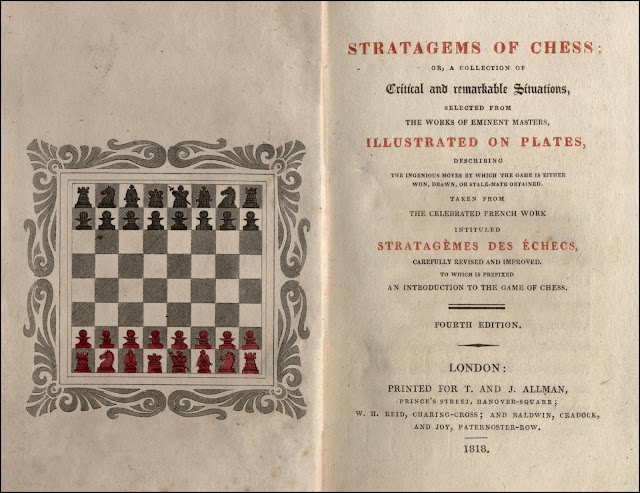