W. S. Branch was in regular correspondence with Alain C. White for many years and, in his Cheltenham Examiner column of 4th April 1906, he quotes the following passage from a recent letter:

"Last week I bought part of the general library of the late Senor José Brunet y Bellet, of Barcelona. A Fine Collection... It includes one of the great chess prizes, a copy of Lucena, also a few other chess works of less importance - the Portuguese Damiano, etc. The Lucena is not a perfect copy, four pages being copied by hand from the British Museum. Otherwise, it is in beautiful condition. It bears the bookplate of James Whatman, evidently an Englishman. Have you any idea who this is?  No, I am not related to Mr. White of Cleveland, though I have had some correspondence with him. His great chess library...as he makes no use of it, its existence is, for the present at least, mainly interesting as one of the wonders of the World!" 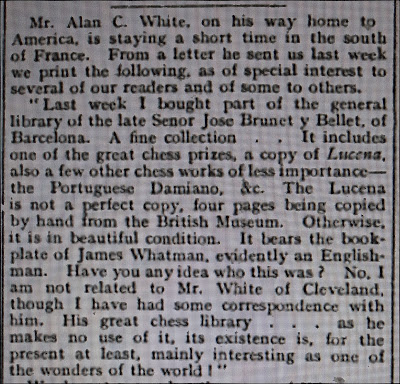 Branch comments that he does not remember the name of Whatman in connection with chess or its literature, and notes that Senor J. Brunet y Bellet published a work dealing with the games of the Mediterranean countries, its chief interest was in regard to the origin of the game of draughts. Branch discusses this at length and concludes his column with the following note:

"As to the great chess library of Mr. White, of Cleveland - it has probably been of more service than Mr. A. C. W. realises, but in a quiet way, giving occasional information to the seekers after knowledge of the past of chess. Several of Mr. White's rare books and MSS. have been lent for study in England. But of course there are many others in Europe."

Three weeks later, in his column of 25th April 1906, Branch included the following reply in the To Correspondents section:

A.C.W., New York - Mr. Whatman was a gentleman of Kent. Two books in the British Museum Library have his book plate. They - the plates - are of a style not earlier than 1800.

Jeremy Gaige, in his Chess Personalia, records that José Brunet y Bellet was born in Barcelona in 1819 and died there in 1905.

The catalogue of the National Library of the Netherlands lists the following three works by Brunet y Bellet:

Luis de Lucena's book, Repetición de Amores e Arte de Axedres con cl iuegos de partido, published in Salamanca circa 1497, is indeed one of the great chess prizes. H. J. R. Murray states that "it is a book of considerable rarity", on page 784 of A History of Chess and notes that copies are known to exist in the libraries of The British Museum, Brussels, Madrid, Escorial, Siena and Rio de Janeiros, and also in the private collections of J. G. White (Cleveland), Mr. J. Rimington Wilson (Broomhead Hall, Sheffield), A. C. White (New York) and E. B. Cook (Hoboken).

The Rimington Wilson copy sold for £550 at Sotheby's in 1928, an enormous sum in those days. As a comparison, copies of Damiano's book were priced  at just a few guineas (maximum 14 gns) in Bernard Quaritch's catalogue No. 428 of 1929.

Substantial information about Lucena and his works can be found in The Return of Francesch Vicent, The History of the Birth and Expansion of Modern Chess by José A. Garzón, Valencia 2005. 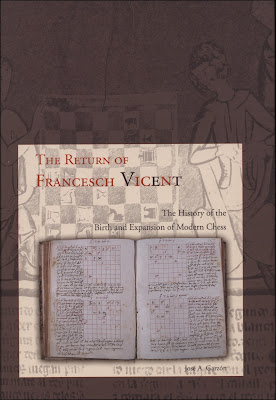 However, a more accessible book is Chess: The History of a Game by Richard Eales, London 1985, which also has a detailed description of Lucena's book and from which the following title page is taken 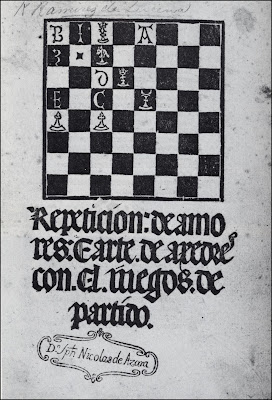 Posted by Michael Clapham at 00:10