Books covering Bobby Fischer's early tournaments are thin on the ground. Only one of his first nine tournaments from February 1955 to July 1956 has an associated tournament book in English, that is for the United States Junior Championships held in Lincoln, Nebraska in 1955.

Furthermore, of the first twelve tournaments in which Fischer played, and for which there are tournament publications, nine are Limited Editions by Jack Spence, some of these very limited with less than 100 copies printed. The others include a book on the Canadian Open Chess Championship held in Montreal in 1956, by Daniel Yanofsky, and two B. C. M. Quarterlies covering the Portoroz Interzonal Tournament of 1958 and the 1959 Candidates Tournament held in Yugoslavia. Some of these books were published a considerable time after the event.

I have a few of these publications on Fischer's early tournaments as follows:

A Selection of Games from the Tenth United States Junior Championship, Lincoln, Nebraska, published by Jack Spence in 1955. 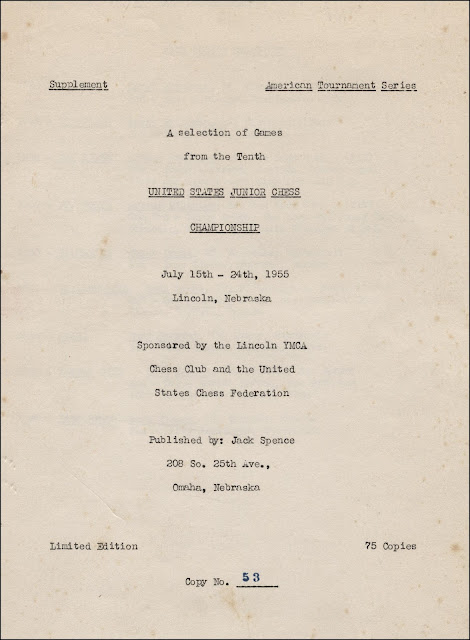 The booklet consists of 20 sheets of paper stapled together and was printed in a limited edition of only 75 copies. This was the first tournament publication to include games by Bobby Fischer.  The tournament was won by Charles Kalme, a handsome unassuming youth from Philadelphia, according to Spence, and his prize was a $75 suit. 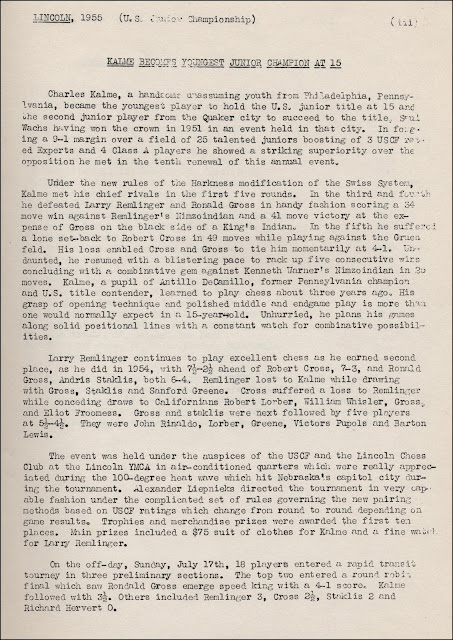 Fischer, the youngest competitor at 12, was virtually unknown at the time, and was not even mentioned in  Spence's introduction. He finished in 20th place out of 25 competitors scoring two wins, six draws and two losses. 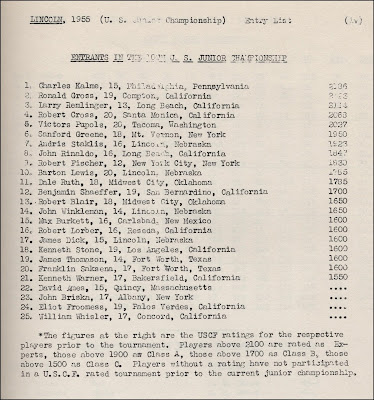 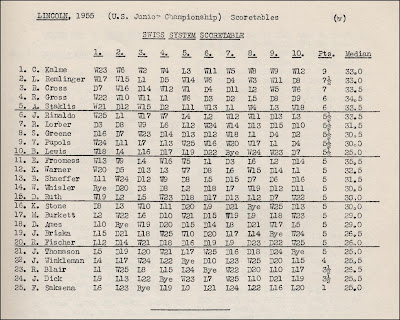 The booklet has 75 games, without notes, including four of Fischer's games. Here is his win against James Thomason in round three: 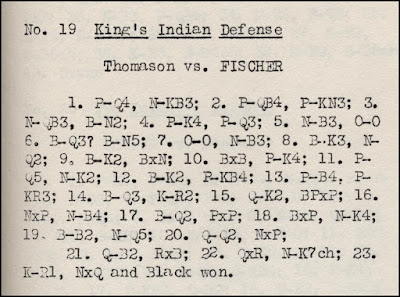 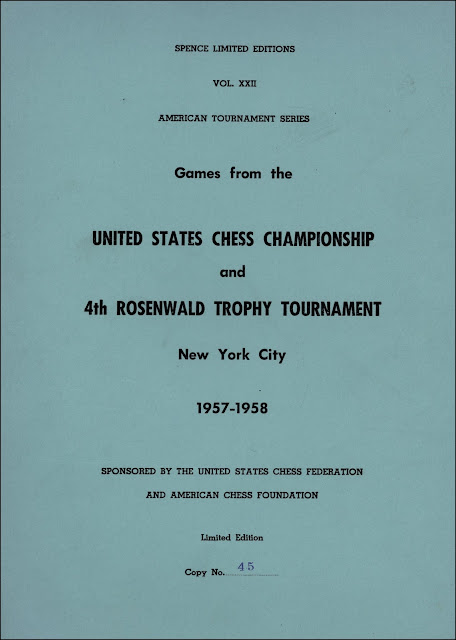 This limited edition of 150 copies was a more professional production than the previous item, the 46 leaves being ring bound with proper covers. However, it is still a typescript stencilled on the rectos only.

Fischer, aged 14, won the event ahead of Reshevsky with a score of 10½-2½ winning $600. He was now the star of the show and featured prominently in Spence's Preface. 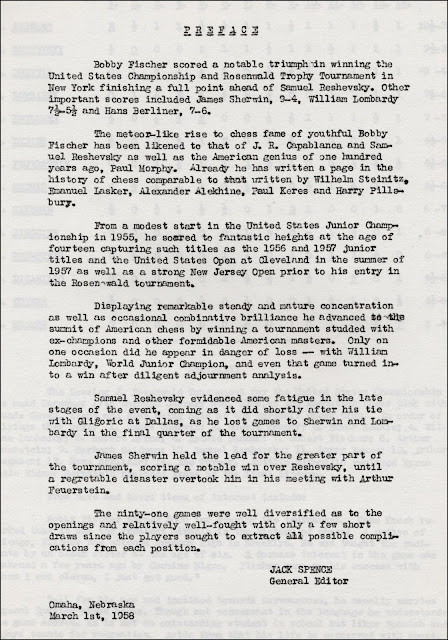 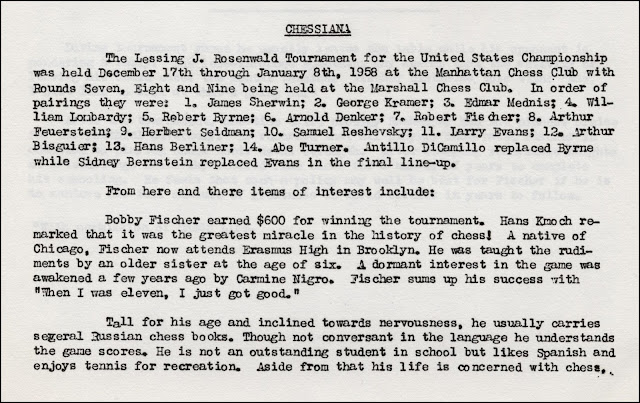 All 91 games are included, most with a short review of the opening and the course of the game. There are also round by round results and commentaries. Here is Fischer's first round win against Arthur Feuerstein. 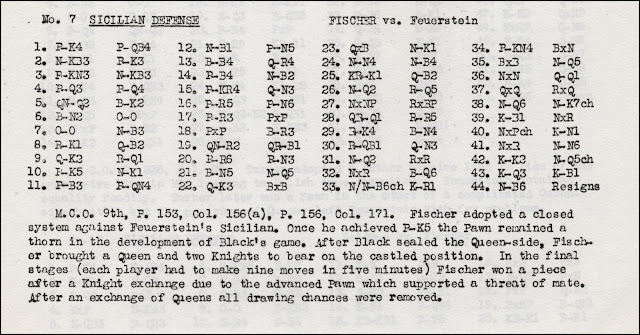 All of Fischer's games from this event are featured in Bobby Fischer's Games of Chess, New York and London, 1959, with his annotations written at the age of 14 and 15. 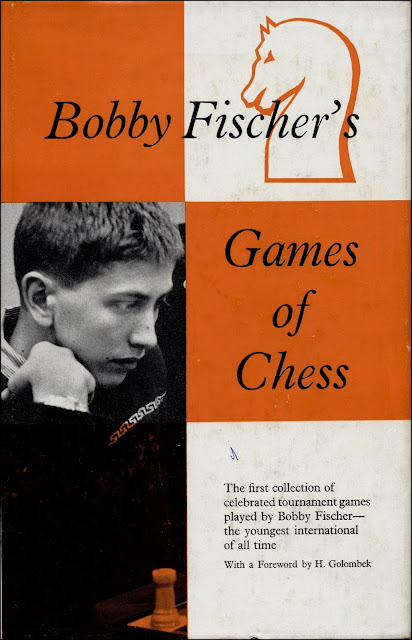 The tournament counted as the U.S.A. Zonal event and Fischer therefore qualified to play in the Interzonal Tournament to be held in Portoroz in August and September 1958. 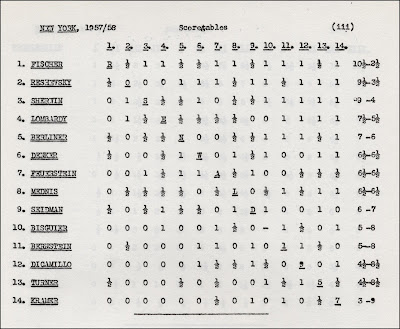 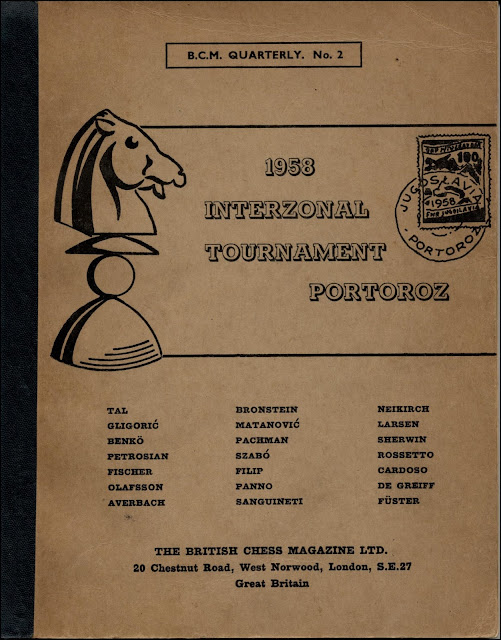 Bobby Fischer, aged 15, finished in joint 5th place in this, his strongest tournament to date, 1½ points behind the winner Mikhail Tal. This achievement qualified Fischer for the forthcoming Candidates Tournament and he was also awarded the Grandmaster title, becoming the youngest ever GM. In fact, at that time, no one as young as 15 had even been awarded the International Master title. Today the IM record is held by Praggnanandhaa who gained the title aged 10 !! 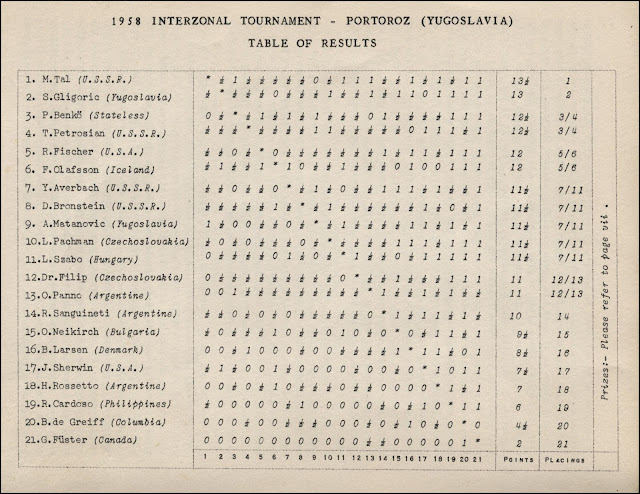 This book has a long 12 page introduction by A. S. Russell which included a detailed discussion of each player's performance. Here is what Russell had to say about Fischer: 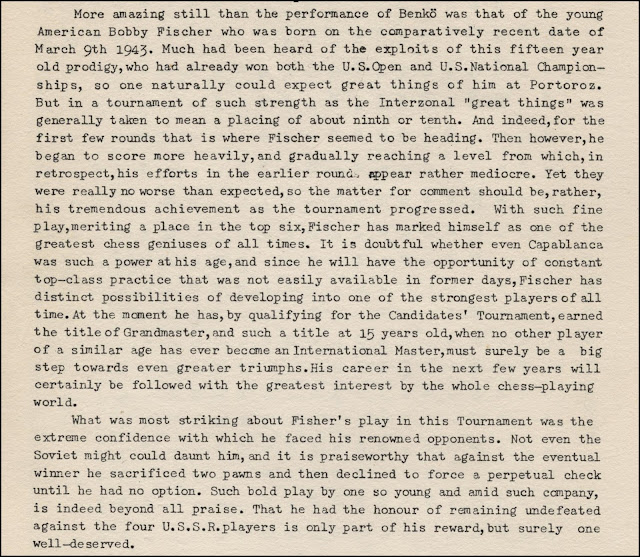 Round by round score tables are provided and all 210 games are given without notes. There are indexes of openings, endings and the games. The book also has one tiny caricature of Tal measuring about 4cm. x 3cm., but no other illustrations. 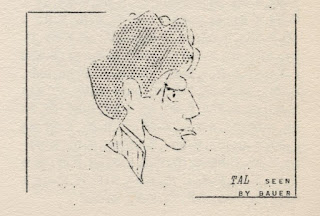 The scores of Fischer's 20 games are also in Bobby Fischer's Games of Chess, publication of which was delayed to enable these games to be included. 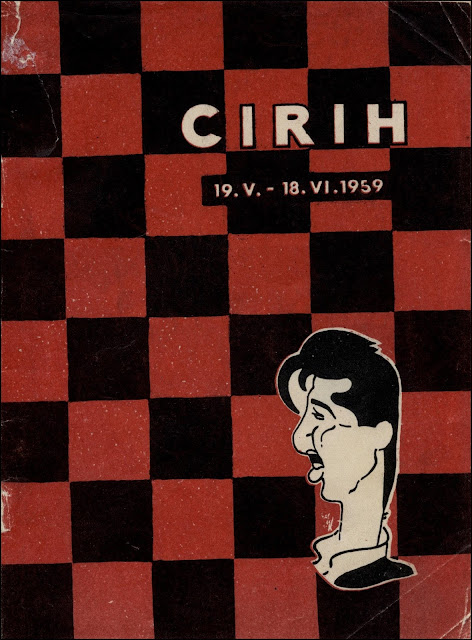 Fischer finished joint third in this very strong tournament, one point behind the winner Tal. This booklet has an introduction by Svetozar Gligorić and all 120 games are given without notes. A crosstable is provided together with portraits  and very brief one paragraph biographies of the 16 players. 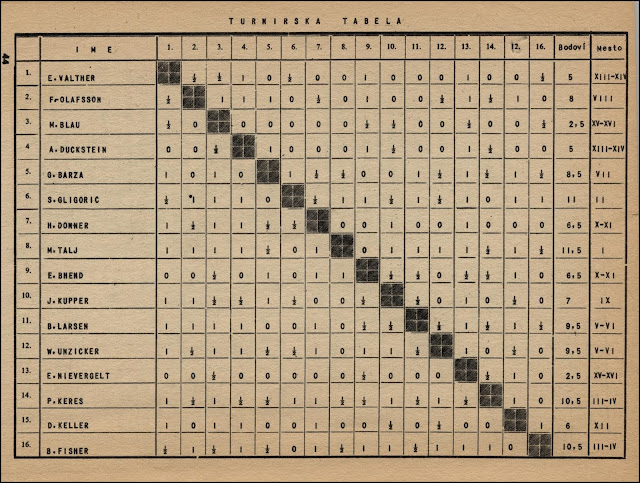 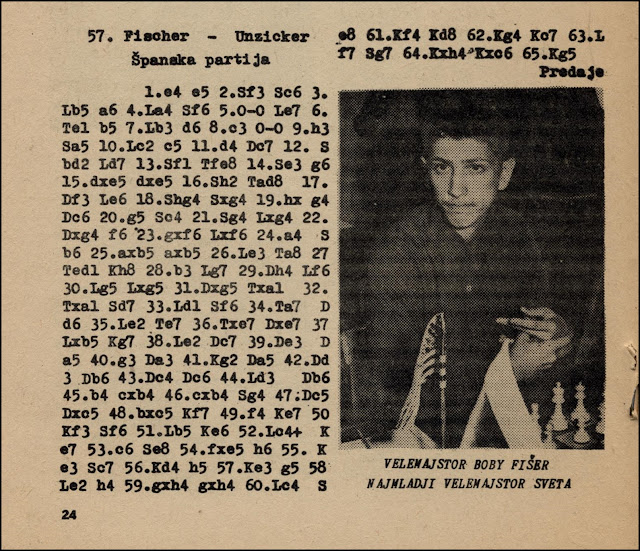 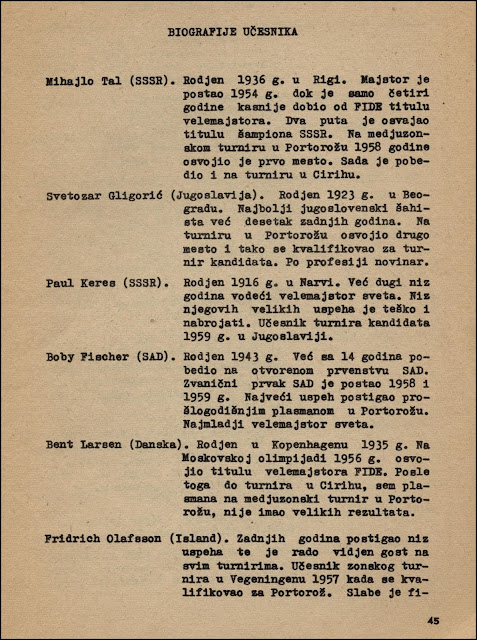 1959 Candidates Tournament, Bled - Zagreb - Belgrade, September - October 1959, by Harry Golombek, London 1960. This book was published after the World Championship match held in the spring of 1960. 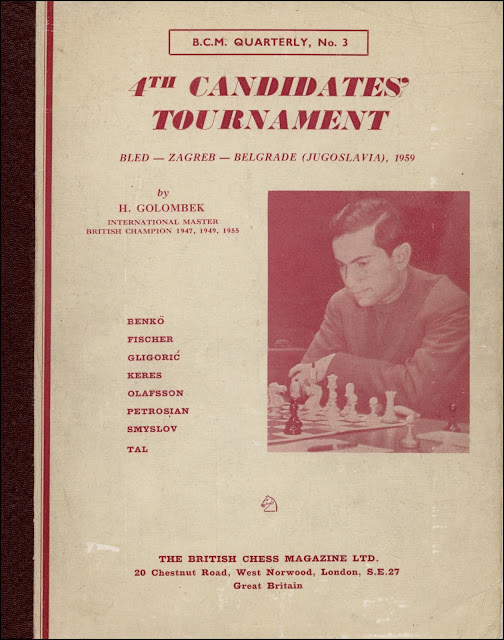 A short introduction by Harry Golombek, the chief arbiter of the event, is followed by an explanatory note on the algebraic notation used in the book. Each of the 28 rounds is reviewed and all 112 games are annotated in some detail.

Fischer scored 12½ points out of 28 finishing in joint fifth place out of the eight competitors, 7½ points behind the winner Tal. Bent Larsen was Fischer's second at this event. 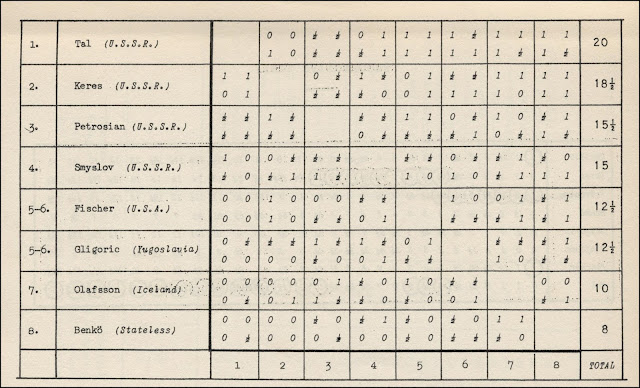 Here is one of Fischer's four losses to Tal: 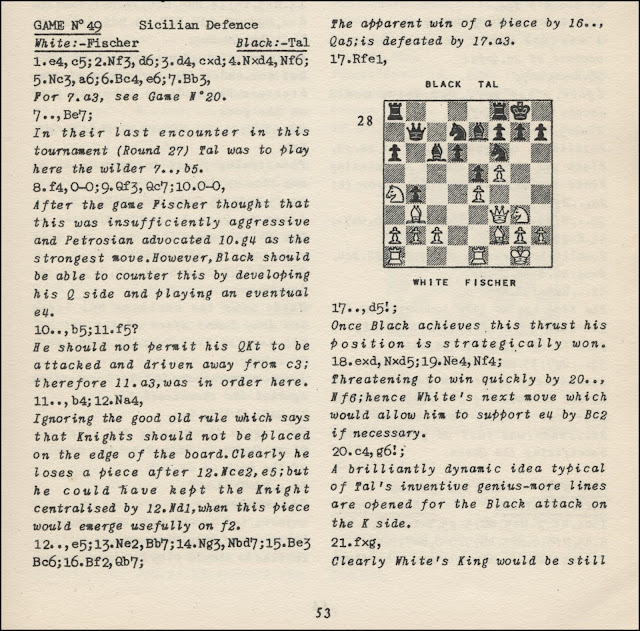 There are indexes of the games, openings, end-games and, very unusually, middle-games. The only portrait is the one of Tal on the front cover. 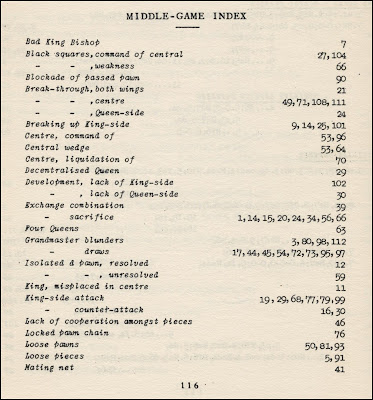 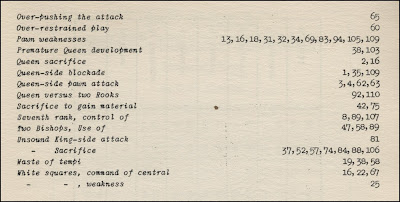 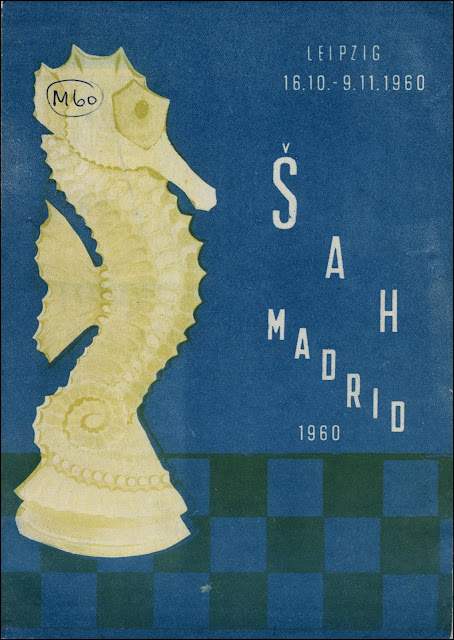 Fischer played 18 games on board one for the U.S.A in this his first Olympiad, scoring +10 =6 -2. The U.S.A. team finished second to U.S.S.R. with Yugoslavia in third place. 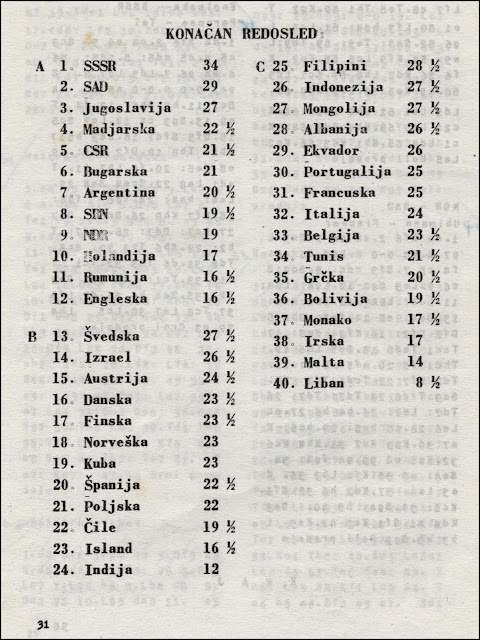 The introduction by Aleksander Matanović is followed by 65 games without notes including six by Fischer. This cheaply produced booklet has a few interesting photographs including the following shot of Fischer and William Lombardy: 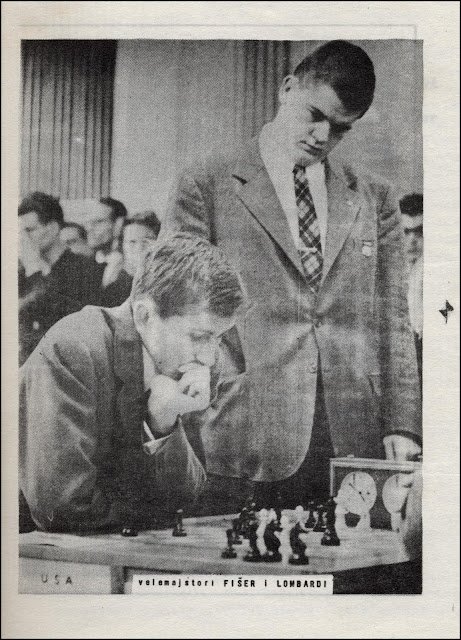 More of Fischer's tournaments in the 1960's another time.