Fifty years ago this month Bobby Fischer played in his last ever major chess tournament, the Interzonal Chess Tournament held in Palma de Mallorca, before embarking on the series of Candidates matches leading to the World Championship match with Spassky in 1972. (Fischer also played in a minor blitz tournament in Manhattan in August 1971, shortly after his Candidates semi-final match with Larsen, winning with a score of 21½ points out of 22.)

Several books were published on the event including three fully or partly in the English Language; two of these will be discussed here. 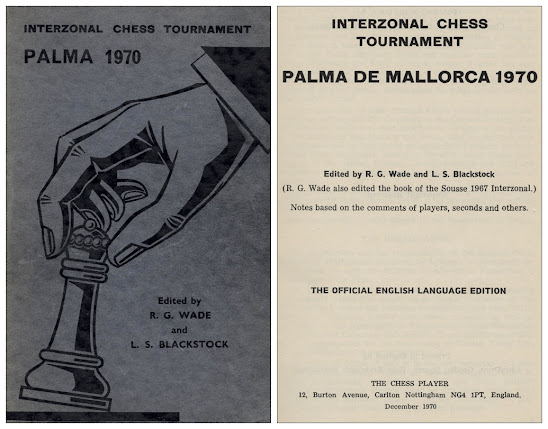 This gruelling 23 round tournament ran from 9th November to 13th December 1970 and copies of this book were on sale at the annual Hastings Congress in early January 1971 due partly to Tony Gillam, the publisher, pounding away for many hours on his Linotype casting machine.

This high quality tournament included 15 Grandmasters and 9 International Masters, all battling for the six available places in the Candidates, for which Petrosian and Korchnoi were already qualified. Fischer's participation was in doubt until just a few weeks before the event as explained on page 10 of the book: 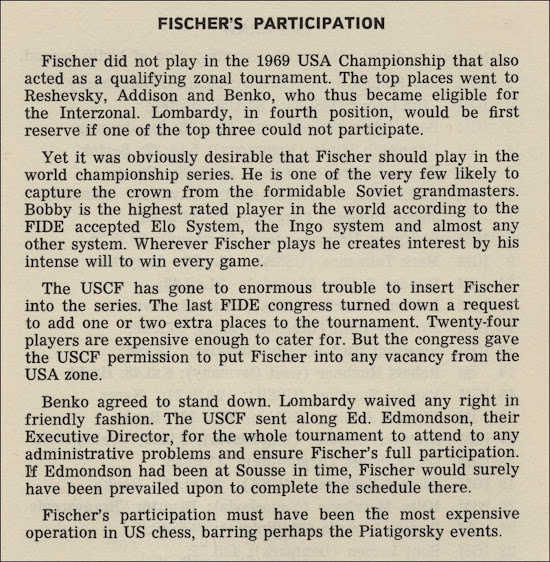 Benko still attended the tournament as second to both Reshevsky and Addison.

Considerable planning had been made by chief arbiter Albéric O'Kelly de Galway and assistant arbiter George Koltanowski, aiming at the fairest and most acceptable pairings throughout the tournament, in particular to ensure that players from the same country met each other in the earlier rounds. Unfortunately this all went out of the window due to a mix up at the drawing of lots resulting in considerable chaos and dissatisfaction among the players. Nevertheless, with a small amout of switching of rounds, the tournament proceeded fairly smoothly.

For each round, Wade and Blackstock's book provides a succinct but informative summary of the play plus some off the board snippets. The authors obviously had their ears to the ground, and followed the play perceptively. Almost all of the 276 games are entertainingly annotated, often with the help of comments from the players or their seconds, and occasional diagrams are shown at key moments. Here is the summary for round 17: 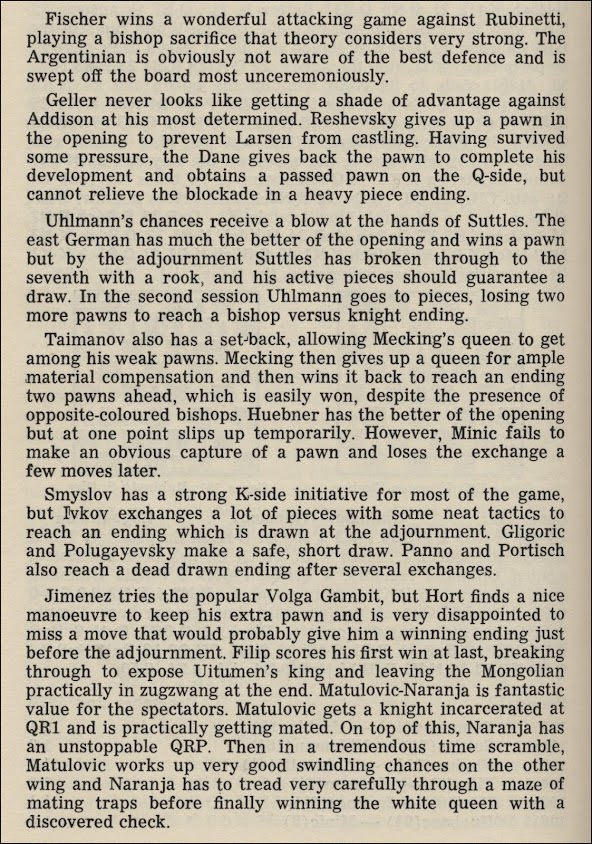 Obviously, with so many games to cover in a 232 page book, there is a lot to squeeze in and every page of the book, apart from the 24 full page portraits, is packed with text, there is very little white space. However, the layout is clear and the book is easy and enjoyable to read.

Following his big margin wins in Buenos Aires and Rovinj - Zagreb earlier in the year, Bobby Fischer continued in his  outstanding form and qualified for the Candidates matches in no uncertain manner.

Fischer took the lead in round 5, overtaking the Mongolian outsider Tudev Uitumen who had won his first three games. In round 9 Fischer lost his only game of the tournament to Bent Larsen, allowing Efim Geller to catch him up. The much anticipated Fischer v Larsen game was adjourned after white's 46th move and was promptly published with notes in the official daily bulletin before the game was resumed. The bulletin even gave the winning line for black from the adjourned position!

Draws in the next two rounds (including round 11 where he played 1.c4 for the first time in a serious game) left Fischer ½ point behind Geller after 11 rounds. However Fischer beat Geller in round 12 (he had lost their three previous encounters) and regained the lead. Fischer was still only ½ point ahead after 16 rounds but then pulled right away from the field by winning each of his last seven games (his last round win was a walk-over as Panno declined to play). Fischer won the tournament with a score of 18½; 3½ points clear of the three runners up, Larsen, Geller and Huebner. This seven game winning run was the start of his remarkable sequence of 20 successive wins before eventually losing the second game of his final Candidates match against Petrosian.

Fischer's biographer Frank Brady described this victory as "one of the outstanding accomplishments of his career and one of the most remarkable results achieved by any player at any time in the long history of the game" on page 179 of the updated edition of Profile of a Prodigy, David Mckay, New York 1973 (published by Batsford in London 1974 under the title of Bobby Fischer). On the same page Brady quotes a prophetic remark by Najdorf following this event: "He'll have to concede two points to the rest of the players to make any future tournament in which he competes interesting to all" 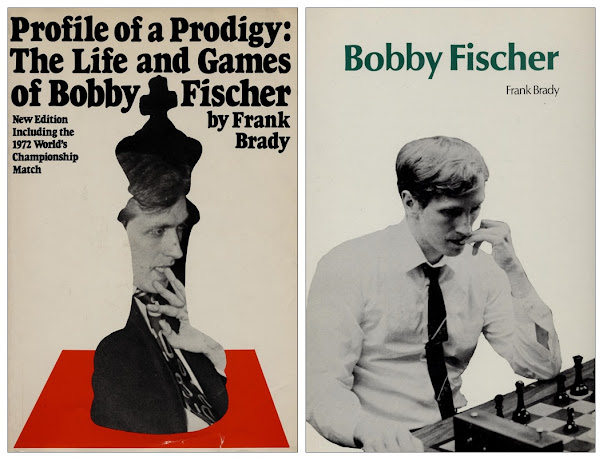 The following photographs show the six qualifiers for the Candidates matches: (Although these photographs are in the Palma 1970 book, the portraits of Fischer, Larsen and Geller were taken at the Siegen Olympiad in September 1970)

Fischer did not enter any of his games for the Best Game Prize (won by Wolfgang Uhlmann for his round 13 game against Uitumen), but the following game against Rubinetti was considered as one of his best by the editors Wade and Blackstock: 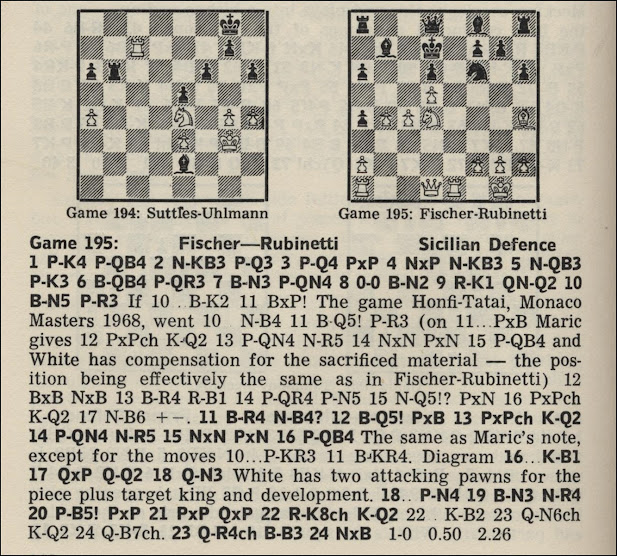 Following on from the final comment made in the article: Fischer's Participation, the editors published a correction on page 222:

However, this is at odds with David Levy's comments on page 135 of the Christmas 1970 Chess magazine in which he stated that Fischer had reputedly been paid $15,000 to play.

The book concludes with a three page Tournament Survey summarising each player's performance and commenting on the event generally. 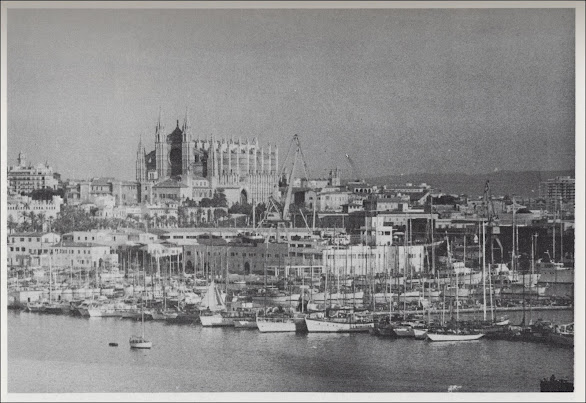 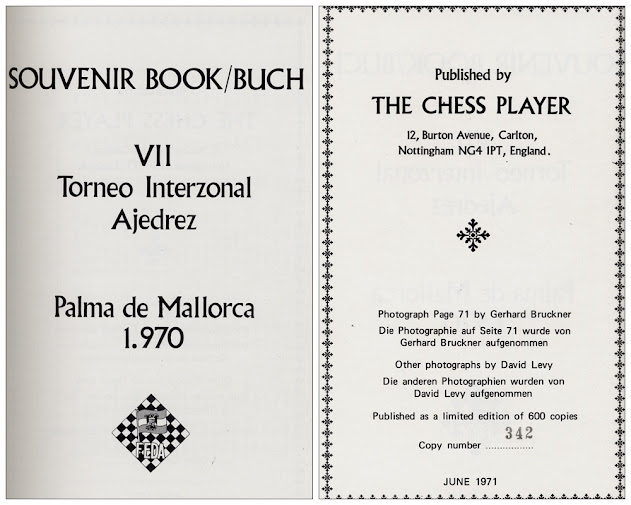 This was actually the 8th Interzonal tournament and not the 7th as stated on the title page.

This high quality production was published in a limited edition of 600 copies and consists almost entirely of 115 full page photographs from the event printed on glossy paper. The small amount of text is in either English, German or Spanish. The book includes a list of the 24 competitors, a calendar of the 23 rounds, four pages with 52 facsimile signatures of the players, officials and others, and the menu from the closing banquet. 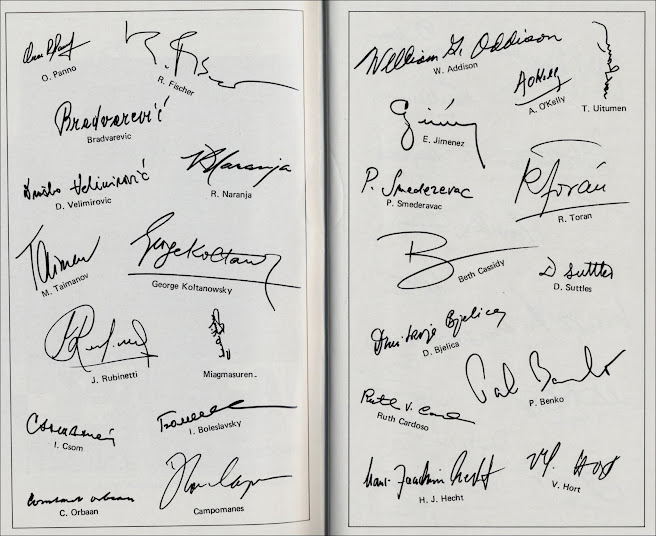 Other than that it is photographs all the way through, including many close-up shots of the players. The book states that all but one of the photographs are by David Levy, the exception being by Gerhard Bruckner. 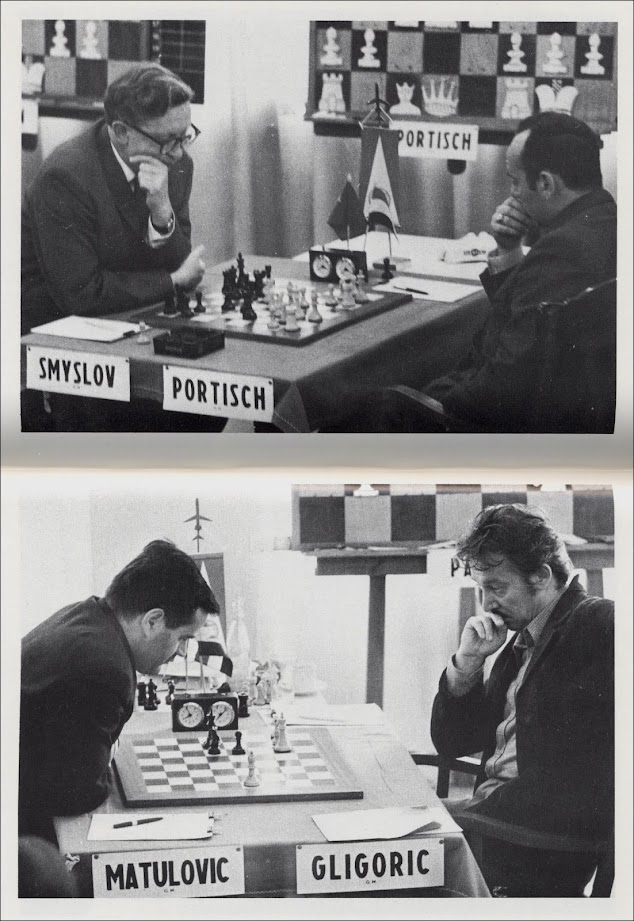 There seems to have been an embargo on photos of Fischer at Palma de Mallorca as there is not a single close-up of him at the event in either of these two books, although there are plenty of most of the other competitors. The Souvenir Book does have three full page photos of Fischer but these were all taken at the Siegen Olympiad held two months earlier. There are  two other photos in which Fischer appears; one showing him in discussion with chief arbiter O'Kelly de Galway after his sixth round win against Reshevsky, and in the other he is being presented with the winner's trophy. 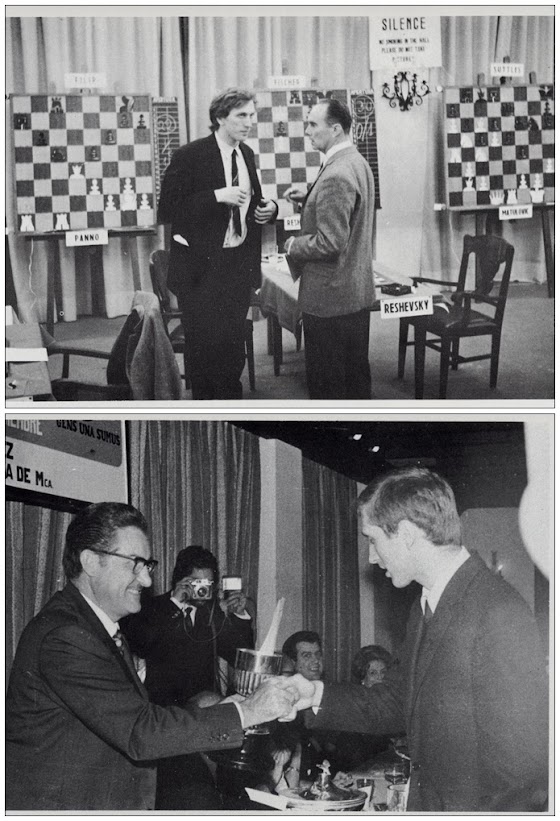 Two further photos feature the board ready for Fischer's game against Minic, and the demonstration board showing the final position after his win against Uhlmann in round 18. 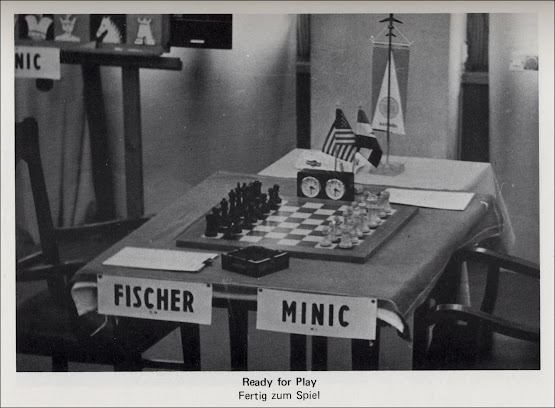 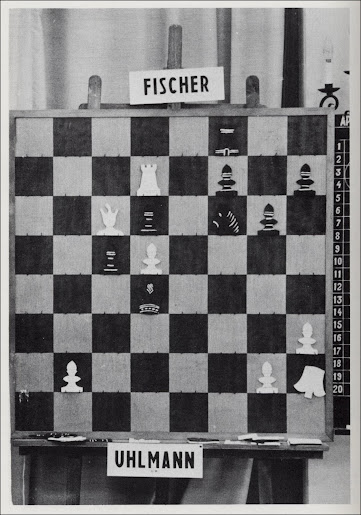 The British Chess Magazine for January 1971 has a long report on the Palma de Mallorca Interzonal on pages 1 to 21 by Harry Golombek who attended the final two weeks of the event. A couple of interesting comments from his report:

1. Raising the matter of Fischer's debacle at the Interzonal Tournament in Sousse in 1967, where he withdrew when in the lead after 14 rounds on account of several well documented disagreements with the organisers, Golombek asks how the Palma organisers managed to keep him placated throughout. Golombek states that both O'Kelly de Galway and Koltanowski informed him: "The perfect and obvious solution was found by acceding to all Fischer's demands"

2. Reflecting on Fischer's game against Minic, Golombek comments "...Fischer had little difficulty in winning, even though, to those of us who had been accustomed to seeing players like Alekhine and Capablanca dispose of lesser players with the utmost accuracy in the ending and with a corresponding elegance, it was rather painful to witness the imprecise, almost amateur, way in which this particular ending was conducted. Still, note that one instinctively compares Fischer with such figures as Alekhine and Capablanca; there are few such in the long history of the game."

I would like to thank Tony Gillam of The Chess Player publishing company for pemission to include extracts and photographs from his two books, and also Owen Hindle for his assistance.

Posted by Michael Clapham at 19:00