Plenty of chess books have been published after the death of the author; these include books "in the press" at the time of the demise, part written works, completed and edited after the author's death, and books published from manuscripts left behind, sometimes many years after the author had passed away.

Among these posthumous publications are some classic works including the following selection:

Masters of the Chess Board, by Richard Réti, London 1933. 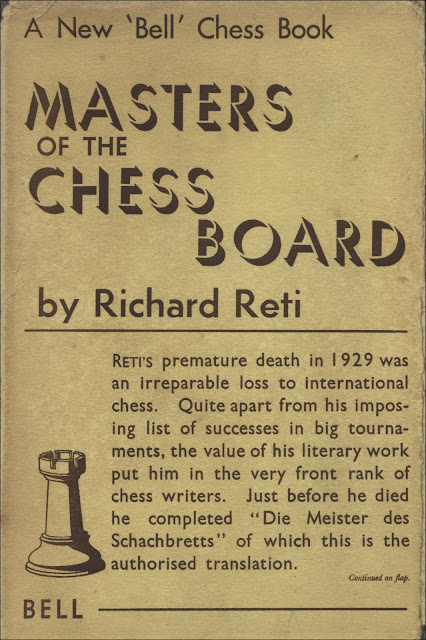 Richard Réti died in 1929, aged 40, and this book was originally published in Germany in 1930 as part of a two volume set: Das Werk Richard Rétis im Schach, Mährisch-Ostrau, 1930-1931. Volume I is Die Meister des Schachbretts.

The translation into English by M. A. Schwendemann was revised by Julius du Mont who also wrote an introductory note on the author. In this, du Mont referred to Réti's infamous briefcase, stating that "at last he has parted with it, but let us all be grateful that, in it he left his Magnum Opus, Masters of the Chess Board." 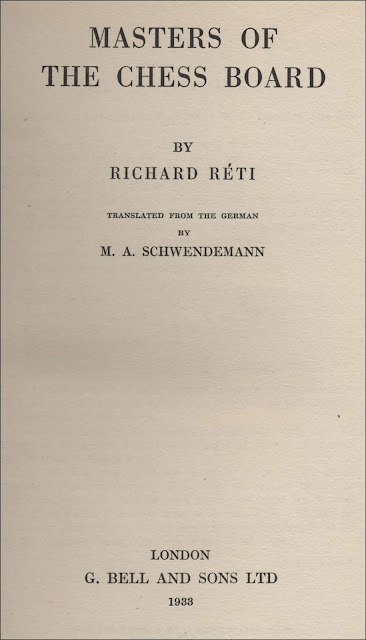 Réti included brief biographical vignettes and characteristic games of some of the leading chess masters from Anderssen to Alekhin with the aim of teaching the historical development and underlying principles of the game.

The British Chess Magazine reviewed both the German and English editions (1930, pages 94-95 and 1933, page 248 respectively), noting that there had been criticisms because no British master was included, but agreeing with Rudolf Spielmann's assessment that this was one of the finest books published on the game. 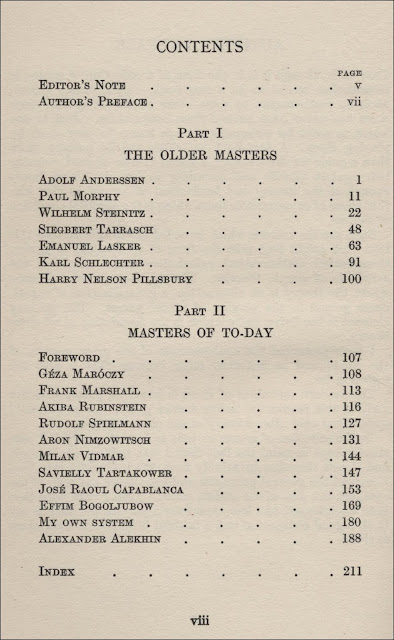 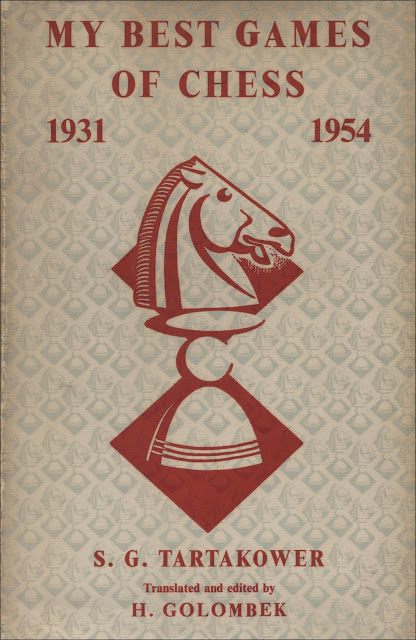 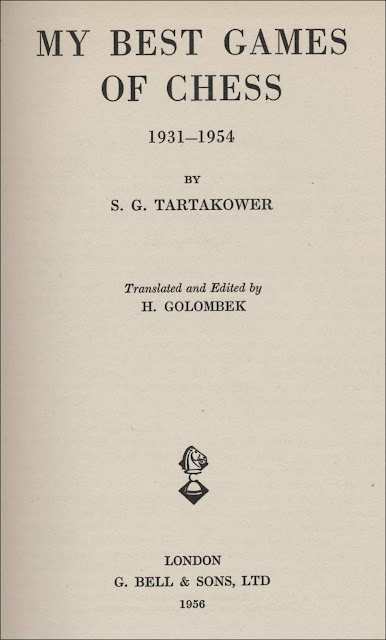 The French texts were translated and edited by Harry Golombek for both volumes and in his Foreword for the second collection, Golombek talks of his friend Tartakower in the present tense before adding a final sentence: "As this book goes to press I learn with the deepest regret of the sudden death of Dr. Tartakower in Paris on February 5th, 1956". 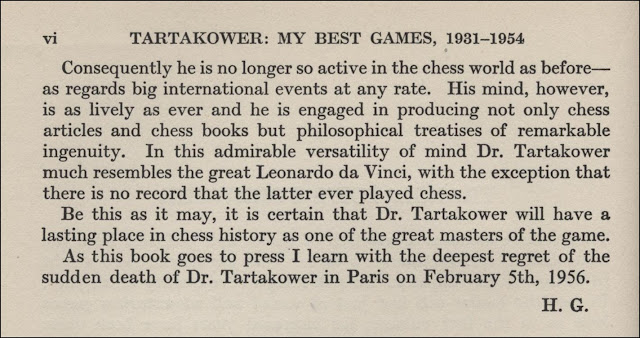 Renowned for his dry humour, this is from the final position given in the book: 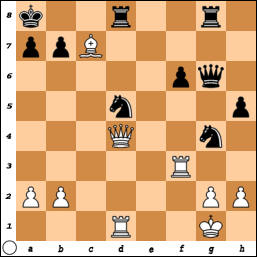 Black played Nxh2 and announced: "It's something like mate in two moves or else I win the Queen". Tartakower replied "Yes, it is mate in two", and played: 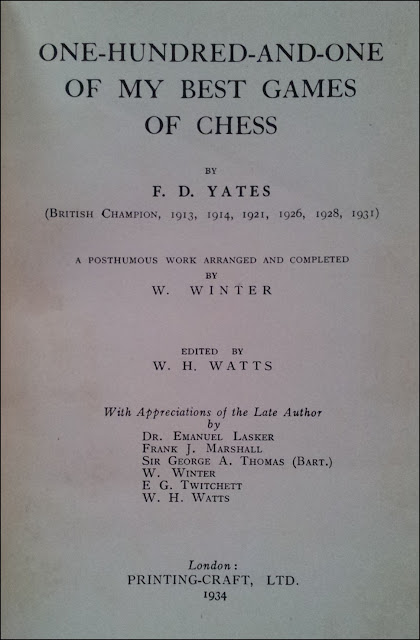 A posthumous work arranged and completed by W. Winter and edited by W. H. Watts.

Fred Dewhirst Yates died in 1932 aged 48 and the obituary in The British Chess Magazine for December 1932, pages 525 to 528, gives a vivid account of the circumstances of his death.

The book was published by Watts's company Printing Craft Ltd. and, immediately following the obituary, the BCM published a letter from Watts, on page 529, giving details of the planned collection of games, confirming that Yates's part of the book was very nearly finished, and promised to pay a proportion of the proceeds to his relatives. 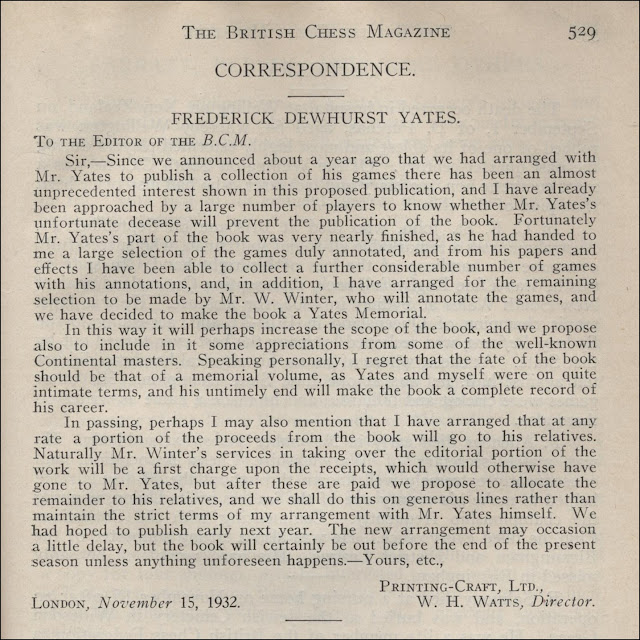 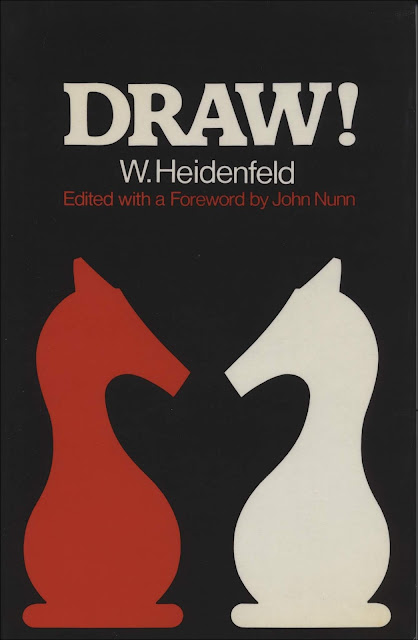 Heidenfeld had written a precursor to this book in 1968 with the title Grosse Remispartien, but Draw! was a new work, omitting some of the games from his 1968 book and with many additional games. 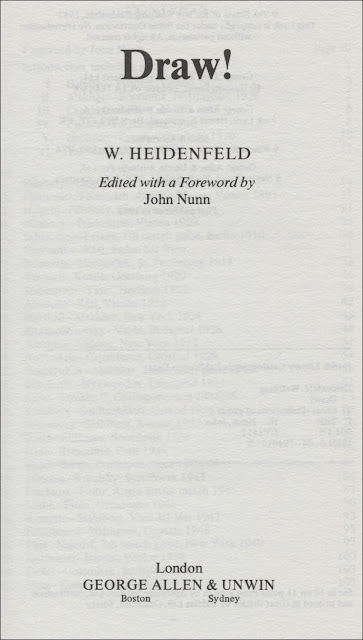 The manuscript had been completed and Draw! was almost ready for publication when Heidenfeld died in August 1981 aged 70; John Nunn finalised and edited the work. 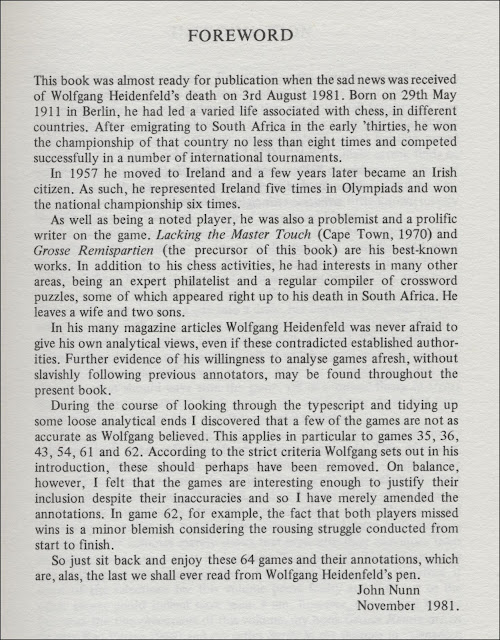 The engaging Introduction, written by Heidenfeld in May 1981, gives six preliminary examples of exciting draws before the 64 games in the main part of the book.

First class games, commentary, annotations and editing but I found the horizontal layout of the moves, with minimal distinction between the actual moves played and variations, a little unclear. 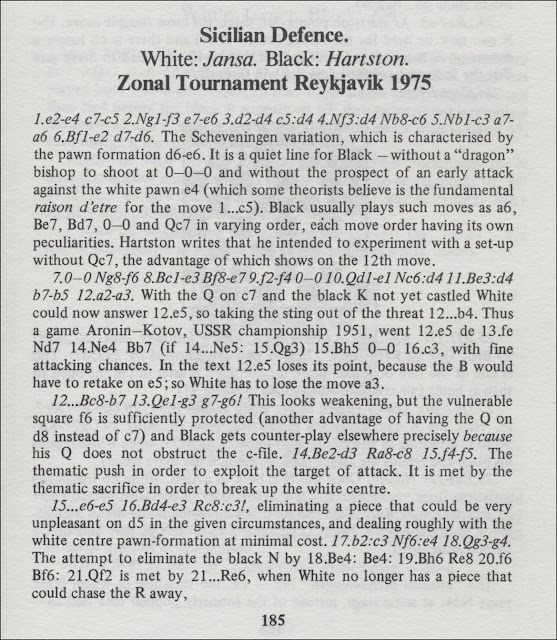 Posted by Michael Clapham at 21:45