Particulars of a Match at Chess, played in Cambridge, in March 1831, published in Hatfield in 1831.

The British Chess Magazine, Chess Annual 1916, included an essay, on pages 5 to 13, written jointly by Philip W. Sergeant and B. Goulding Brown entitled Early Oxford and Cambridge Chess. Goulding Brown followed this up with a further article: The Critical Period of Cambridge Chess in the September 1917 issue of The British Chess Magazine, on pages 265 to 273, in which he enlarged and corrected the Cambridge portion of the first essay. 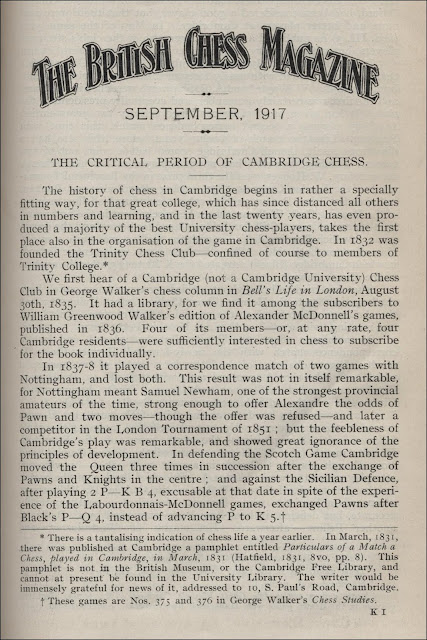 Both of these items included a footnote, on the first page of each, giving details of an 8 page pamphlet entitled Particulars of a Match at Chess, played in Cambridge, in March 1831, published in Hatfield in 1831.


The first mention that I can find of this pamphlet is on page 243 of the bibliographical appendix to George Walker's short lived magazine The Philidorian, which ran from December 1837 to May 1838, and this also appears in the Bibliographical Catalogues in Walker's A New Treatise on Chess, third edition, London 1841, page 278, and fourth edition, with additional title, The Art of Chess-Play, London 1846, page 389.

Walker's references to this pamphlet were picked up by subsequent bibliographers and this item appears in Literatur des Schachspiels, by Anton Schmid, Vienna 1847, on page 266:

This is also recorded at 1831:3 in Chess Texts in the English Language, printed before 1850 by Ken Whyld and Chris Ravilious, but is not in Di Felice's Chess Competitions 1824-1970; An Annotated International Bibliography.

So, plenty of bibliographical references, but finding a copy is another matter. This pamphlet is not recorded in any of the major library catalogues such as those for The Royal Dutch Library, Cleveland Public Library, The British Library, the Cambridge University Library, the Bodleian Library in Oxford, etc. Nor have I found it in any bookseller's or collector's catalogues.

However, at least one copy does exist, or it did in 1932. Goulding Brown returned to this matter in The British Chess Magazine for October 1932 in an article on pages 431 to 435 entitled Early Oxford and Cambridge Chess: A Sequel.

On page 434 he discusses the Particulars of a Match at Chess pamphlet and confirms that he had had no replies to his previous request for information about any copies. Goulding Brown then revealed that a copy had been discovered hidden in a volume from the Rimington Wilson library bound up between William Lewis's two Series of Progressive Lessons on the Game of Chess, published in 1831 and 1832.

This volume formed part of the Rimington Wilson auction sale held by Sotheby's in 1928 and subsequently appeared in Bernard Quaritch's Catalogue of Rare and Valuable Works...of the Game of Chess issued in 1929. Item 813.

Goulding Brown purchased this book from Quaritch and devotes several paragraphs of his BCM article to a description of this exceptionally rare leaflet. He describes it as a badly printed octavo of eight pages, containing the full scores of a three game match between two unnamed players, and he points out the historical importance of this being the very first separate publication of the complete account of a chess match between two players, as distinct from a correspondence match between two clubs.

This pamphlet had previously been in the possession of George Walker and had presumably been purchased by Rimington Wilson from the sale of Walker's library in 1874. On the title page Walker had noted the player's names as Mr. Gordon of Trinity College and Mr. Oppenheim, Professor of Languages, and that the match was won by the former.

Goulding Brown then tried to deduce the exact identities of these players before concluding with details of another MS. note by Walker to the effect that both were very weak players. 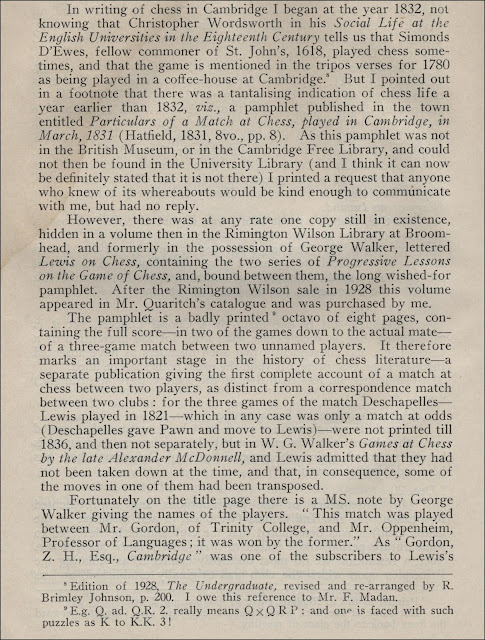 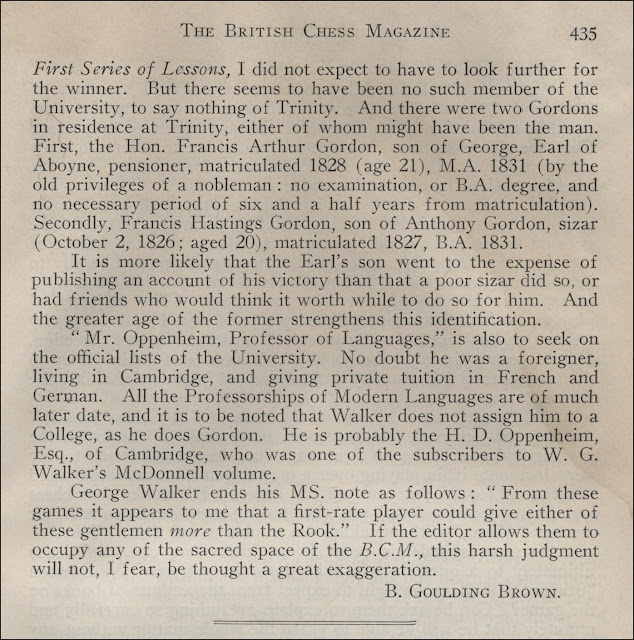 The question is: where is this treasure now?

Posted by Michael Clapham at 23:31