The Chess Monthly by Morphy and Fiske, part 2 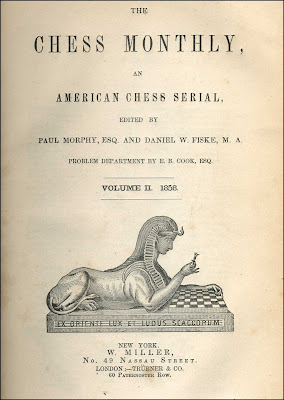 
There was no further news in the June issue regarding the Anglo/American negotiations, but as is well known, Morphy decided that, if Staunton would not travel to America, he would travel to England, and on page 216 of the July issue Fiske reported that Morphy had sailed from New York on 8th June heading for Liverpool ..."for the purpose, if it is agreeable to Mr. Staunton, of contesting a grand match with the distinguished English player".

Pages 255/256 of the August issue gave the first reports of Morphy's arrival in England, with results and details of some of the players with whom he had "broken a lance". Page 256 also reported that Staunton had accepted Mr Morphy's challenge, the match to be played after the Birmingham Meeting with stakes of 500 pounds a side.

The first games appeared in September, including one of the consultation games against Staunton and 'Alter' (Rev. J. Owen) in which Morphy and Barnes sacrificed a rook on move 16 (they were already a piece for a pawn ahead at the time) before going on to victory in an exciting game. 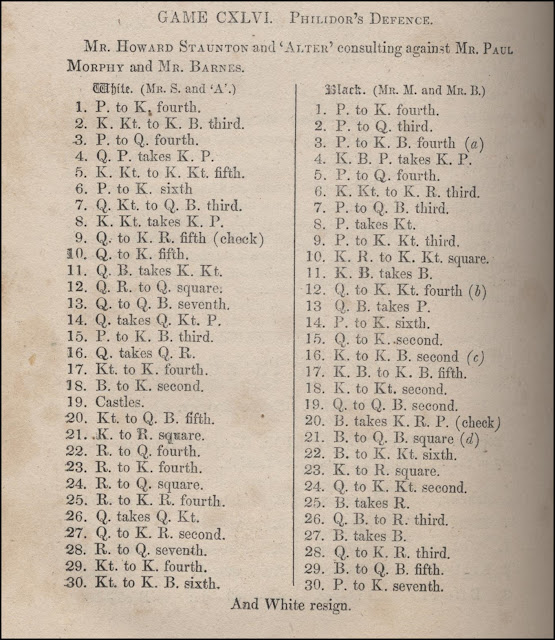 Other sources, including Morphy's Games of Chess, by J Löwenthal, London 1860, page 221, continue the game as follows:

Under the heading Paul Morphy in the Old World, Fiske writes "The spectacle now presented by the chess-world of Great Britain has never been equalled in the annals of the game", and he reproduces a long article, on pages 280-282, from The Press, a London journal of influence, which "gives a good picture of the excitement created by Mr. Morphy's advent in England, and of the impression which his style of play has made upon the British chess community." Following this are comprehensive details of Morphy's match against Löwenthal for which "Mr. Staunton has been named as umpire".

The laudatory praise for Morphy's exploits and triumphs continues in the October number on pages 314 to 320; including the following quotes (with indirect digs at Staunton):

George Walker: "we consider Mr. Morphy a phenomenon, and are delighted to hail in him certainly the finest player since M'Donnell and Labourdonnais."

S. S. Boden: "he is beyond question, one of the very finest players living; and we may fairly question whether he will meet with his superior."

Falkbeer: "This is, at least, a chess-player from head to foot. Since Philidor and Labourdonnais we do not remember a similar apparition"


The adulation reached a crescendo in November, with more praise from St. Amant, de Rivière and others, culminating with a report on Morphy's astounding blindfold exhibition in Paris against eight opponents, after which, Lequesne, one of his antagonists, proclaimed "such a mind never did exist, and, perhaps, never will again."

However, in the December number, the admiration for Morphy was replaced by frustration and anger at Staunton's refusal to play him, prompting this outburst from Fiske on page 378: 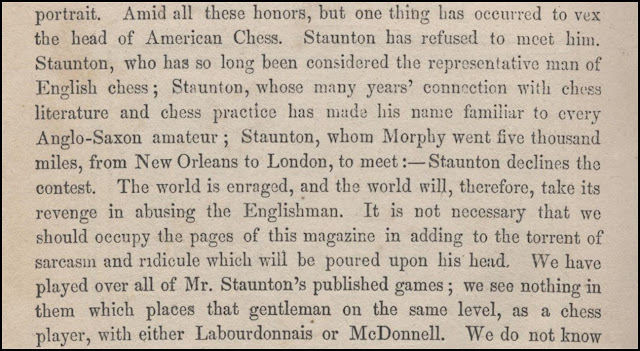 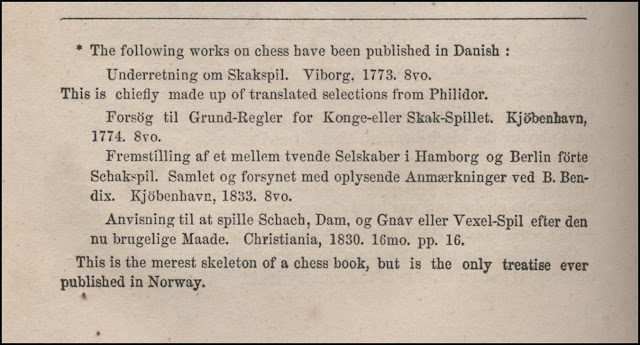 August 1858. Page 255 has brief details of Frere's Chess Handbook, by Thomas Frere, New York 1858, which had recently been detached from his edition of Hoyle and now published separately.

November 1858.  On page 350 Fiske reported that there were now fourteen journals in the United States which publish weekly chess columns. The latest being Harper's Weekly with the chess department ably conducted by Charles H. Stanley, and on page 352 he gives the astonishing news, to me, that the Book of the Birmingham Meeting, containing a full account of that assemblage and a selection from the games played, is to be published under the editorship of Mr. Staunton. Regrettably no such work appeared, however, a report of the tournament, in which Staunton was knocked out in round two, and, during which Morphy played eight blindfold games simultaneously, is included in The Chess Congress of 1862, by J. Löwenthal, London 1864. 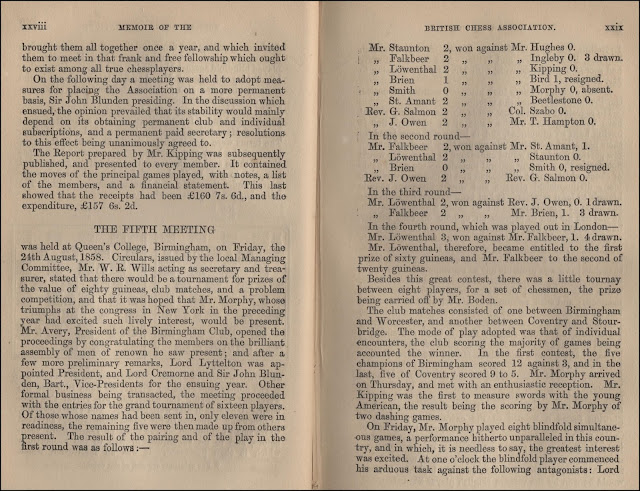 December 1858.   Fiske concludes this number with an announcement that his Book of the First American Chess Congress was currently at the printers and would appear in early 1859. He says it will be a volume of 400 pages, whereas the finished product had 563 pages. Finally the news that von der Lasa is engaged in writing a series of articles for the Berlin Schachzeitung on a complete copy of Lucena, one of the oldest printed chess books, discovered by him in a library at Rio de Janeiro.

In July, details were given of The Congress Picture, an engraving of the foremost members of the late national Congress, with the participants examining a well known three-move problem by Loyd.

Here is the engraving from page 56 of Chess, an Illustrated History, by Raymond Keene, Oxford 1990: 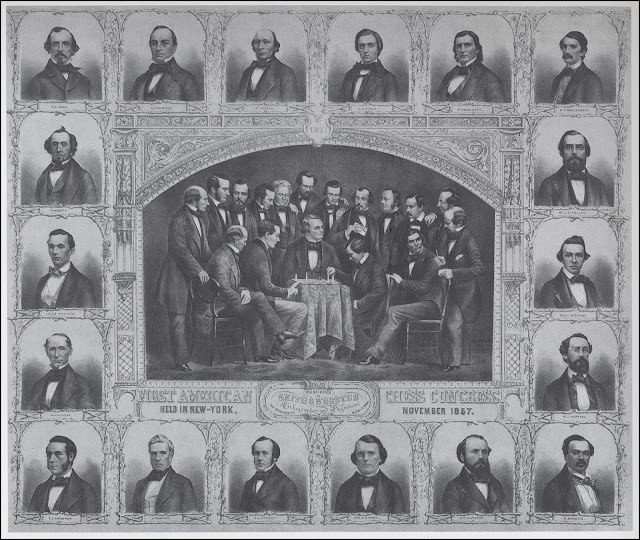 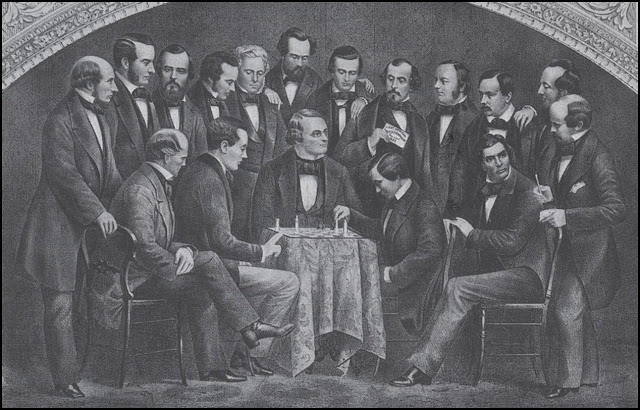 ...and here is a copy of the rare photograph from which the engraving was obviously taken, on page 27 of A Picture History of Chess, by Fred Wilson, New York 1981. Wilson states that Morphy is making a move against Paulsen during the Congress. 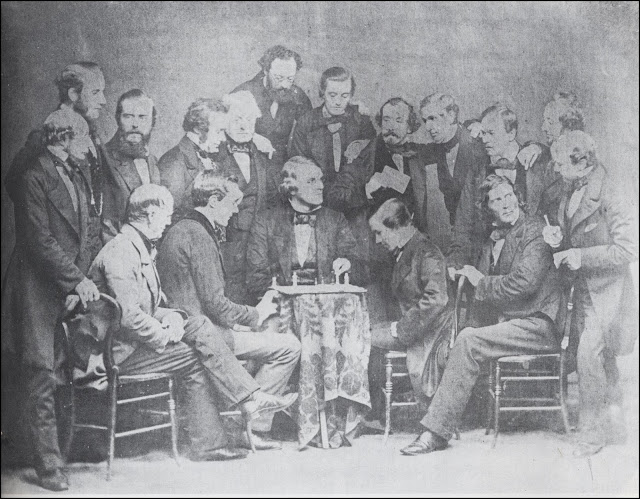 An earlier appearance of the photograph is opposite page 314 of Chess Tales and Chess Miscellanies, by D. W. Fiske, published in 1912, eight years after Fiske's death. 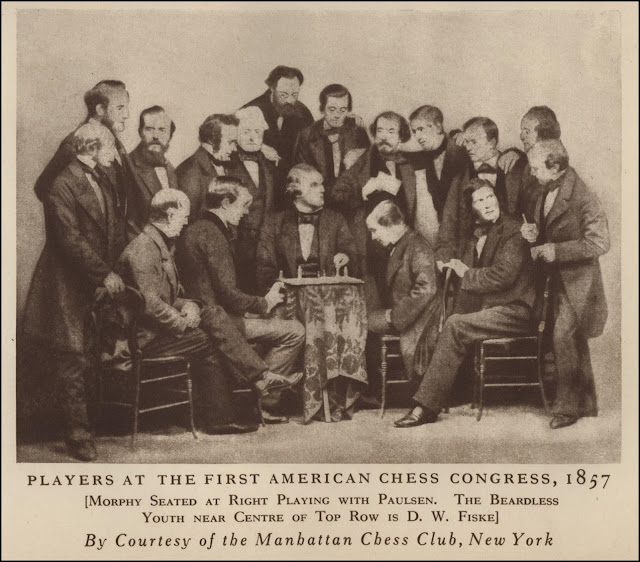 Another in the series Lives of Chess Men appears in the October number with a biography of Elias Stein and details of his chess works.

November opened with a three page article on Continental Chess with news on the current chess scene in France, which was experiencing a period of chess apathy, and Germany which "unlike France exhibits no decline in chess". This followed on from October's article English Chess as it is Today, and Fiske (now 27) displays an impressive knowledge of many European chess personalities, chess clubs, books, periodicals and newspaper columns; presumably acquired from his overseas correspondents and a variety of chess literature and periodicals brought across the Atlantic by steamer.

Fiske considered von der Lasa the foremost European player, (although he never competed in tournaments or formal matches - Oxford Companion to Chess, New Edition, page 216),  But since von der Lasa had been posted to Rio de Janeiro as Prussian Minister, Max Lange was the new rising star "worthy to be ranked among the very first of living players."

This has certainly whetted my appetite to obtain the other volumes in this series.