The Chess Monthly by Morphy and Fiske 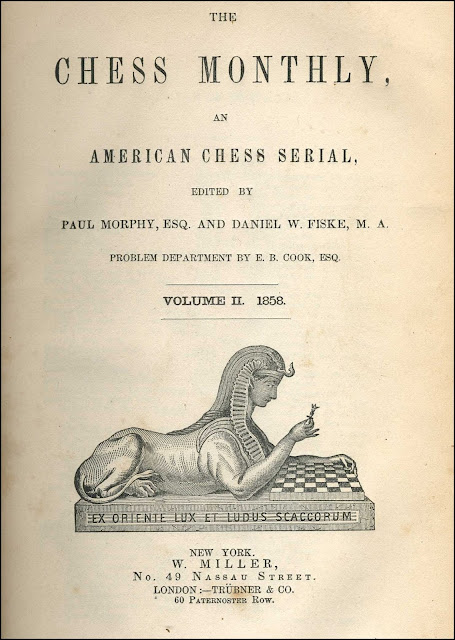 Fiske's Chess Monthly, launched when he was just twenty five years of age,  was an outstanding periodical when first published between 1857 and 1861, probably the best in the English language up to that time, and for a long time thereafter; (John Keeble wrote in The British Chess Magazine in November 1931, page 496, "it is safe to say that [Fiske's] magazine remains to this day the most interesting thing of the kind ever issued"), and, 160 years later, it is still an extraordinarily interesting read for chess history and literature devotees.

This is the second volume, for the year 1858, with Paul Morphy named as co-editor, although he had spent the second half of the year in Europe; and the whole volume is largely a tribute to Morphy with extensive reports of his exploits both at home and abroad. Of the 97 games included in this volume, the great majority are by Morphy, starting with games from the First American Chess Congress, held in New York in October and November 1857, and ending with many of his astonishing performances in England and France.

There is considerable material on the the hoped for match between Staunton and Morphy, beginning on page 96 of the March 1858 issue with the following note: "Mr Staunton says that whenever a challenge is sent by America to Europe it will assuredly be accepted." The April number includes, on pages 124 to 126, the full text of the challenge to Staunton by the New Orleans Chess Club, dated 4th February 1858, with the terms of a proposed match. 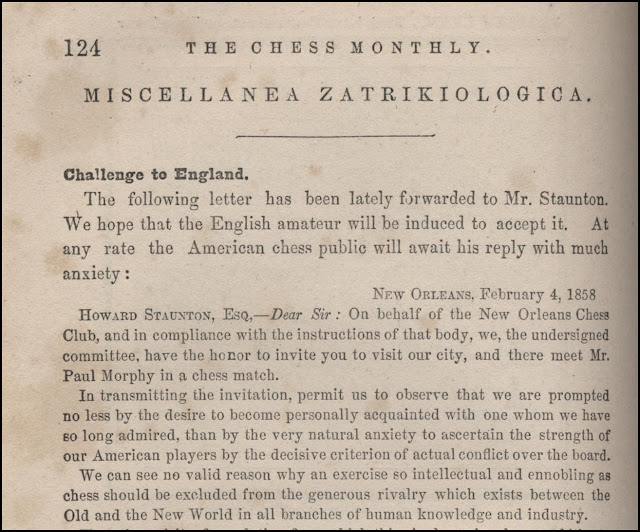 In May, page 159, Fiske writes "Of course the great subject of conversation of late has been the challenge of the New Orleans Club. Players are asking each other: will Staunton accept? And the arrival of each successive number of the Illustrated News is awaited with great impatience." However, on page 160 Fiske announced: "Just as the Monthly is going to press we learn that Mr. Staunton declines the great challenge for the sole reason (as he expressly states) that the match is to be played in New Orleans." 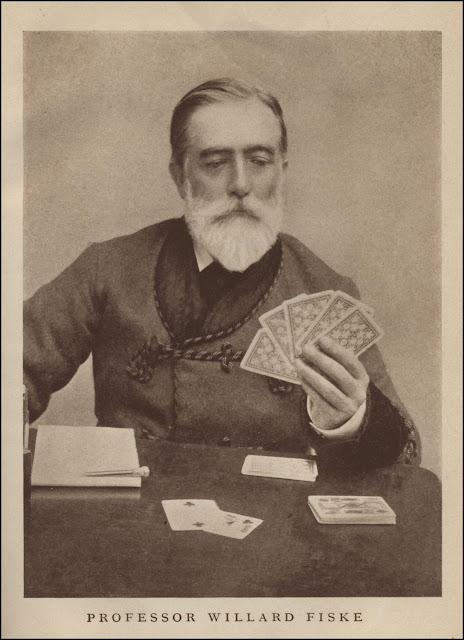 Daniel Willard Fiske (1831-1904) was a librarian by profession and an enthusiastic bibliophile, and he frequently wrote about chess literature in The Chess Monthly. Volume II includes the following:

January 1858:  A brief review of The Report of the Annual Meeting of the Chess Association, held at Manchester in August 1857, Manchester 1857 (Betts 8-3); an update on the progress of The Book of the First American Chess Congress; details of a forthcoming book of problems taken from the Madras Examiner, which Fiske referred to as a second Trevangadacharya Shastree; and a preview of the, soon to be published, appendix to Staunton's Handbook, this is Chess Praxis, published in 1860.

In a Bibliography of Philidor over twelve pages of the January and February magazines, Fiske gives a very detailed, but rather rambling, list of works by Philidor and of the many editions subsequently based on his writings. The footnotes contain as much information as the main text. 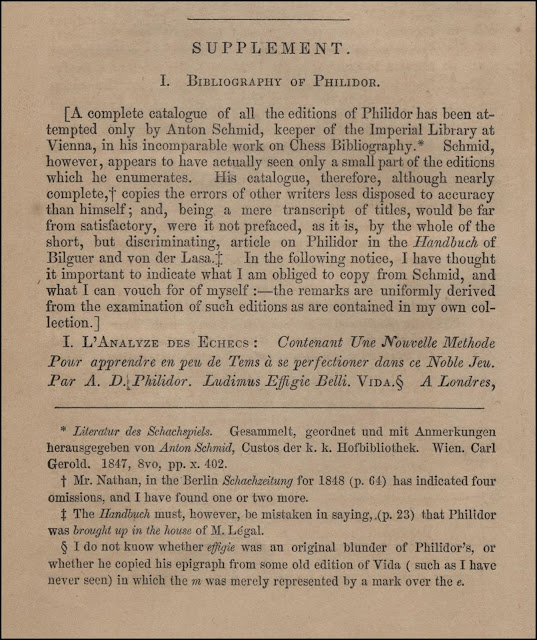 February 1858: Fiske published the "proof" that Letters on Chess, by Carl Frederich Vogt, translated from the German by U. Ewell, London 1848, was actually the work of William Lewis: 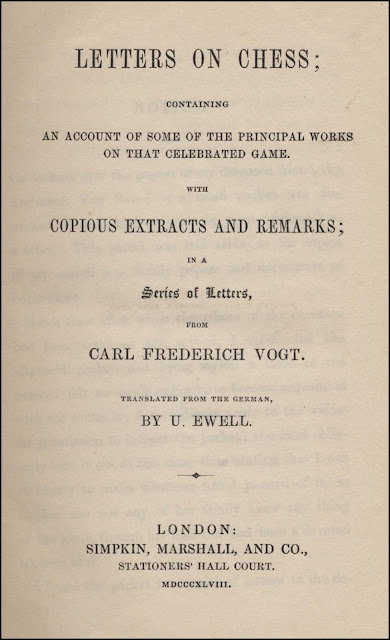 March 1858:   Pages 65/66 contain a review of Jean Preti's endgame treatise; Traité complet, théorique et pratique sur les Fins de Parties au Jeu des Echecs, Paris 1858, and in the monthly Miscellanea Zatrikiologica article on page 92 Fiske gives a long extract from a book by the Rev. D. R. Thomason: Fashionable Amusements, New York 1857, preceded by a comment that The Churchman newspaper "was greatly shocked at the attendance of so many clergymen at the late Chess Congress".

March also includes brief biographical details of Carlo Cozio, author of the rare treatise Il Giuoco degli Scacchi, Turin 1766 and, among several references to current chess literature, Fiske gives a hearty recommendation to the "excellent chess department of Frank Leslie's Illustrated Newspaper" conducted by Napoleon Marache. He also announced "A new chess magazine was commenced last year at Rome, It is called the Album and is edited, we suppose, by Signor Dubois." However, I cannot trace this in either Di Felice's Chess Periodicals or Lineamenti di una Bibliografia Italiana degli Scacchi, by Chicco and Sanvito, Rome 1987; La Rivista degli Scacchi, edited by Dubois with Ferrante, commenced in 1859. 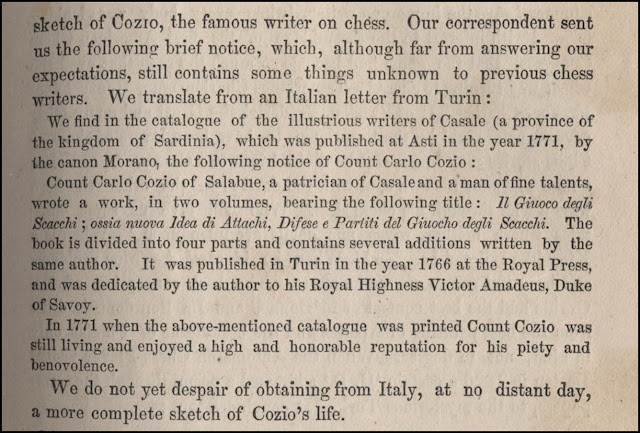 May 1858:  "For their quaint style and curious wording" Fiske published The Lawes of Chesse-Play, extracted from J. Barbier's 1640 edition of Arthur Saul's The Famous Game of Chesse-Play. 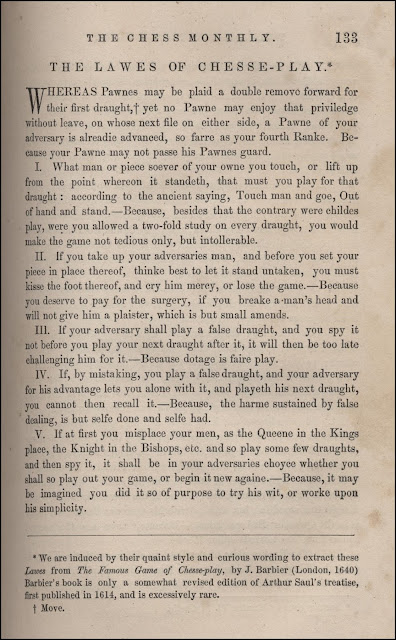 There are many other interesting articles in the first six months of this volume, including, in January, No. III in the series Lives of Chess Men with a five page biography of Francois-André Danican-Philidor. January also included a brief report on the Morphy v C. H. Stanley match with some games published in later issues. In April Fiske commenced An English Chess Glossary, with frequent references to early chess literature. This had reached the letter F by October with no further entries in November or December. 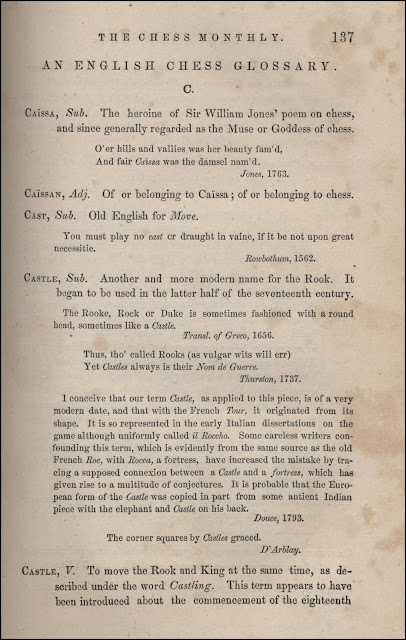 The second half of 1858 will be covered next time.