The Manual of Chess: Containing the Elementary Principles of The Game, by Charles Kenny, London 1847. Betts 10-1 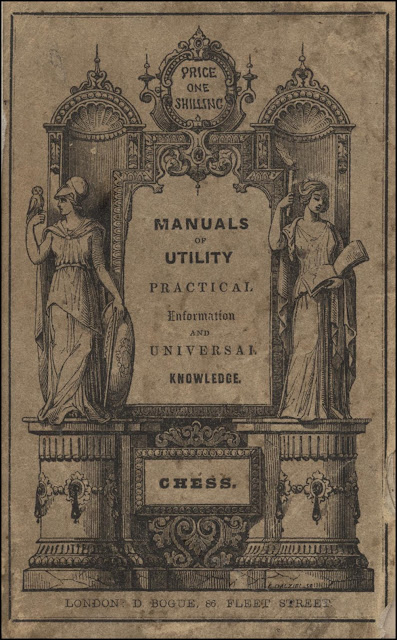 One of the Manuals of Utility edited by John Timbs, this is a small beginners guide of 120 pages following the normal format of a brief history, description, technical terms, laws and general rules of the game, shallow openings, a few endings, five sample games and seven problems. The book concludes with details of four London venues where chess is played, and the two London chess clubs, and finally, a page on current chess periodicals and weekly chess columns. 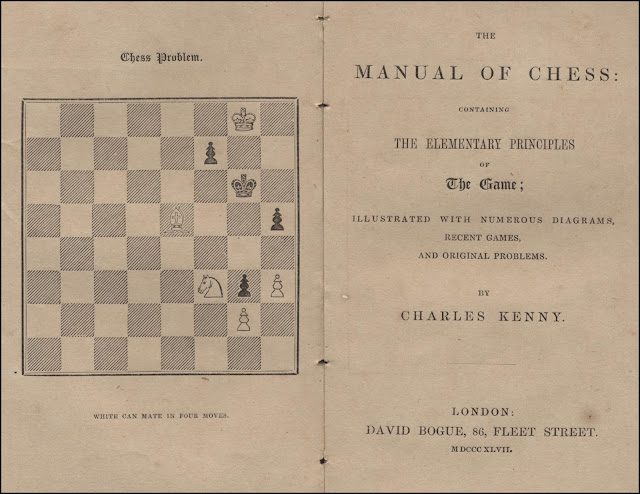 Howard Staunton reviewed this book favourably in The Chess Player's Chronicle for 9th January 1847 on page 12, but this little work was almost inevitably swept aside following the publication of Staunton's own Chess-Player's Handbook in June 1847. 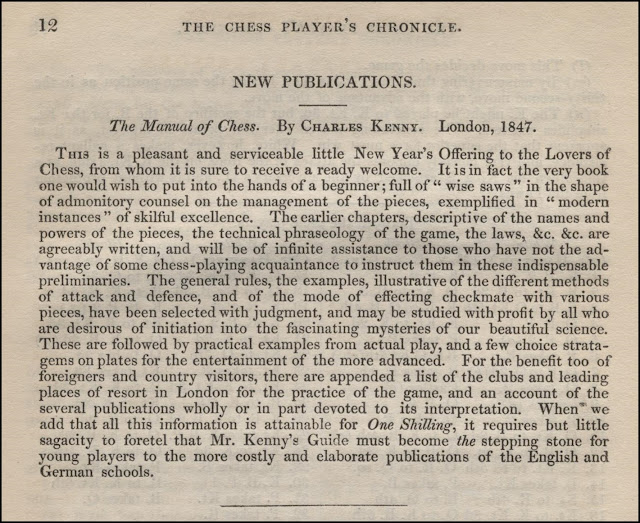 An American edition of this work was published by D. Appleton & Co. in New York in the same year and Fiske commented on this as follows in his American chess bibliography in The Book of the First American Chess Congress, New York 1859:   "XVIII, this is one of several works by a well-known Chess author; the original appeared in London the preceding year; no alterations or additions whatever are made in this reprint."

Fiske's statement is wrong on three counts; firstly, Charles Kenny authored just this one chess book (Fiske no doubt confused Charles Kenny with William Stopford Kenny who wrote Practical Chess Grammar, 1817, Practical Chess Exercises, 1818, Analysis of the Game of Chess by A. D. Philidor, 1819, and contributed to The Chess-Player, 1841.) Secondly, the London edition appeared in the same year as the New York edition, and thirdly, there are differences between the London and New York editions, the latter omits the final lists of Places where chess is played and Chess Periodicals.

Historical Remarks on the Introduction into Europe of the Game of Chess and on the Ancient Chess-men Discovered in the Isle of Lewis, by Frederic Madden, London 1832. 91 pages. 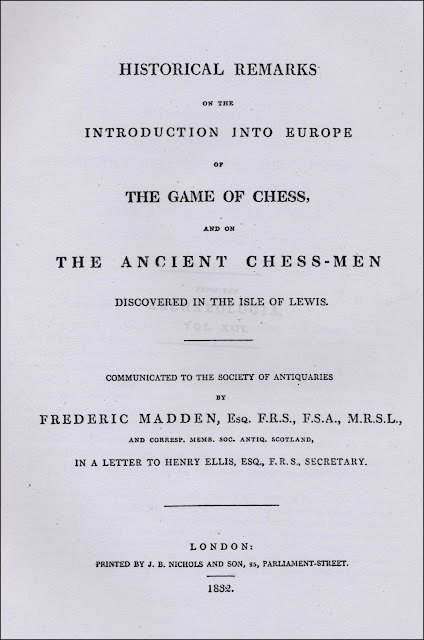 This is a modern reprint of the 1832 publication (40 copies only printed) of Madden's important paper read before the Society of Antiquaries, and originally included in volume XXIV of Archaeologia. Whyld & Ravilious 1832:6 and 1832:7. However, there is nothing to indicate where, when, and by whom this was recently reprinted.

Madden discusses, on pages 3 to 11, the introduction of chess into Europe and he says that, of the numerous writers who have treated of this game, the only treatises worth mentioning, in which the game is considered historically, are those of M. Sarasin, Dr. Hyde, M. Freret, Hon. Daines Barrington, Francis Douce, L. Dubois, Lake Allen, Singer (in his Researches into the History of Playing Cards) and Richard Twiss.

Pages 12 to 43 then give an incredibly detailed description of the ancient chess-men and draughts-men discovered in 1831 at Uig, Isle of Man, which are now known as the Lewis Chessmen.  Madden states that the hoard included 67 chess pieces (it is now known that  a total of 78 was discovered) and he describes in detail every single one of the chess pieces, interspersed with the history and etymology of the nomenclature, form and appearance of the various chess-men. 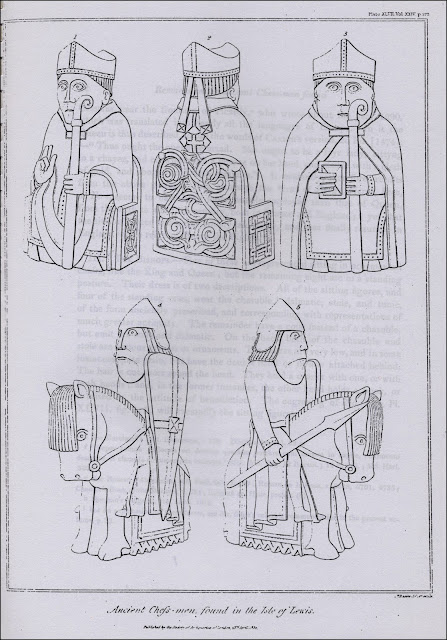 Madden then endeavours to prove, on pages 43 to 91, that the pieces were made in the middle of the twelfth century in Iceland, basing his hypothesis on the material from which they were made (walrus tusk), the costumes in which they appear, and the ancient writings of Scandinavia. His conclusions were the result of an astonishingly detailed and conscientious examination of hundreds of printed works and manuscripts in many languages, and numerous museum exhibits and other artifacts including The Bayeux Tapestry. Madden was Assistant Keeper of Manuscripts at The British Museum at the time and so had relatively easy access to research materials, nevertheless this is research of Mariana Trench proportions! 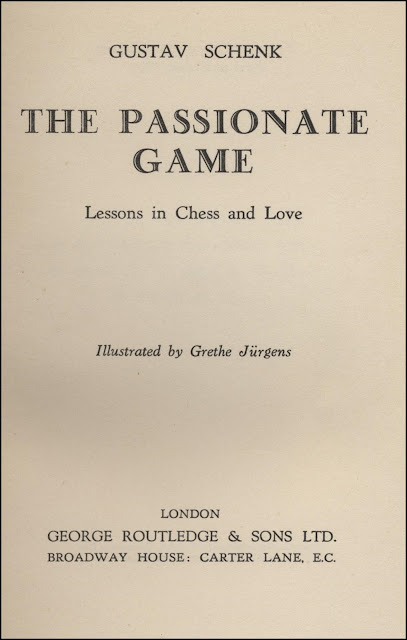 A literary work, originally published as Das leidenshaftliche Spiel: Schachbriefe an eine Freundin in Germany in 1936, in which a gentleman explains the game of chess to a lady in a series of love letters, with a happy ending.

The book has a number of attractive illustrations: 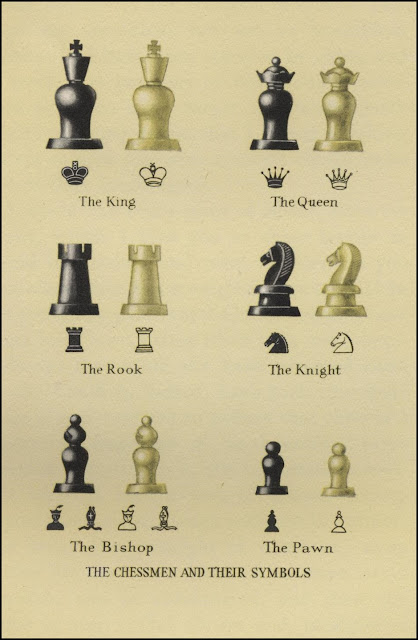 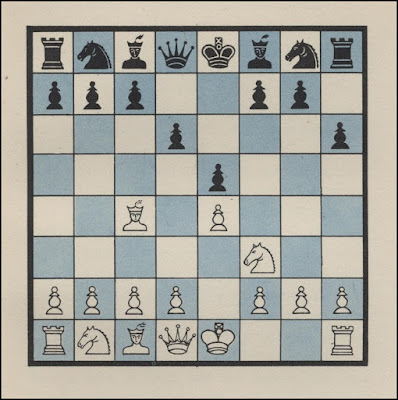 ....and this copy has an intriguing inscription on the half-title: 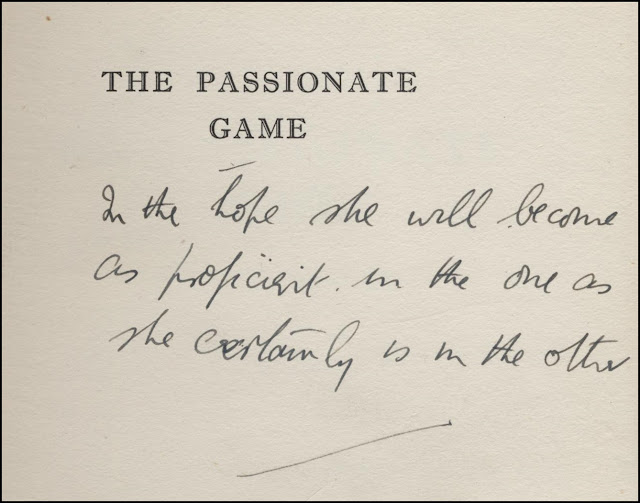 P. S. I have just been browsing through Staunton's edition of Shakespeare in a second hand bookshop, (3 volumes, £140) which again highlights the extraordinary level of research, attention to detail and erudition of many nineteenth century authors.

Posted by Michael Clapham at 09:28