Masters of the Chess Board with additions by Claire Amez-Droz 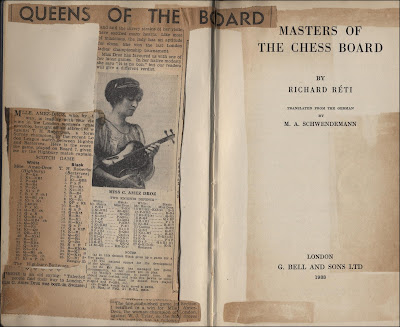 Previous owner's embellishments to their books are often as interesting as the books themselves, if not more so. This copy of Masters of the Chess Board by Richard Réti, London 1933, was previously owned by Claire Amez-Droz, and she filled the book with newspaper cuttings featuring herself, and made many pencilled notes throughout the book. 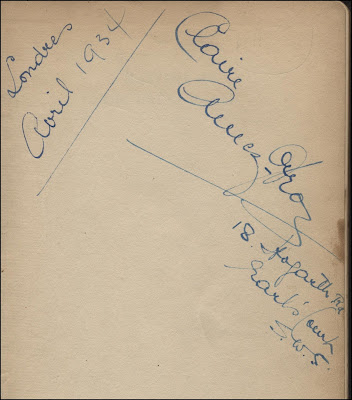 Mlle. Amez-Droz was born in Switzerland but lived most of her life in England. A regular London League player in the 1930's and early 1940's, she won the Women's Chess Championship of London in 1938 and 1939. By profession she was an accomplished violinist performing under the name of Miss Salonja Zema.

Some sample cuttings and comments: 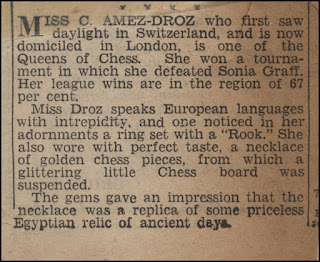 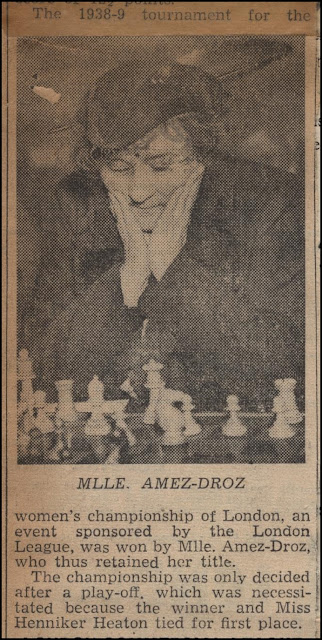 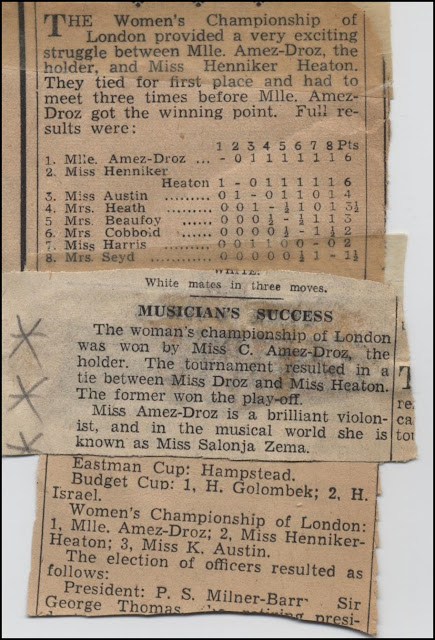 Comments and doodles at the end of the game between Tarrasch and Tartakower, Berlin 1920: 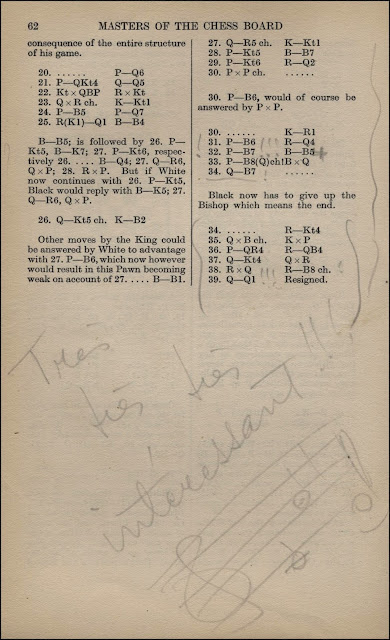 Comments at the conclusion of Steinitz v von Bardeleben, Hastings 1895: 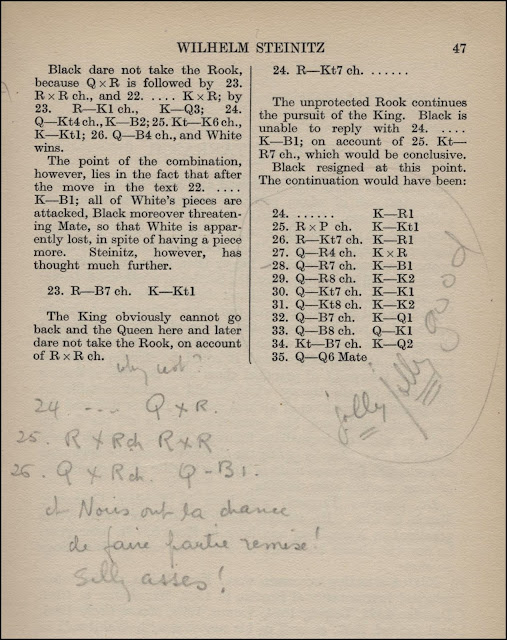 Two handwritten Morphy games have also been pasted in just before the chapter on Paul Morphy. 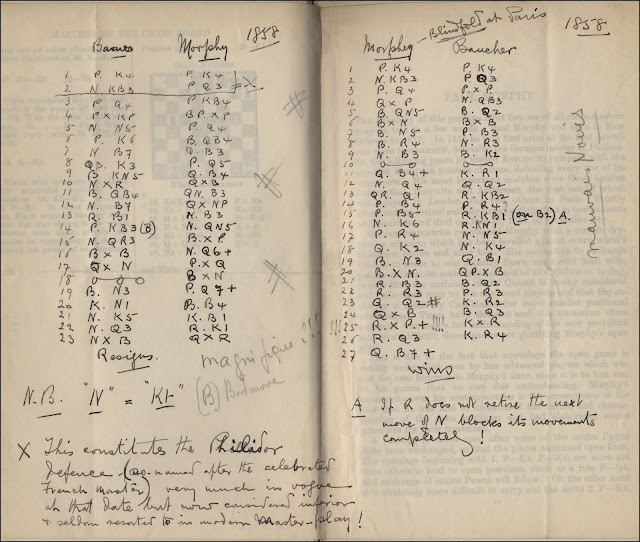 The book includes two postcards dated circa 1934 from Mrs E. Heath who was a fellow competitor in the 1938-39 Women's Chess Championship of London. 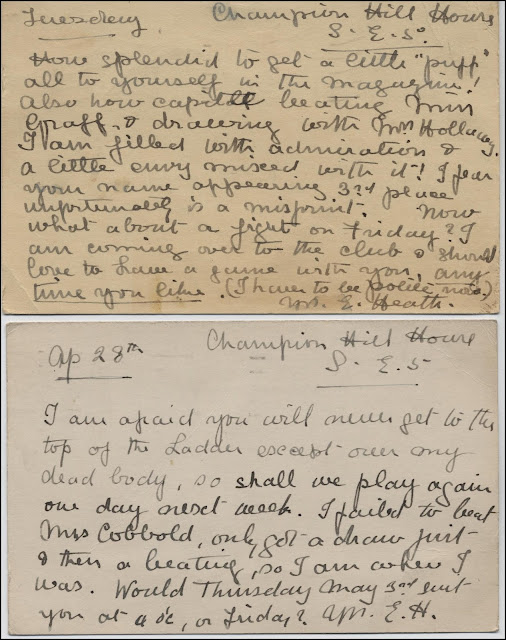 Also tipped in to the book is an extract from the very scarce West London Chess Club Gazette for March 1944 with an obituary for Mlle. Amez-Droz. 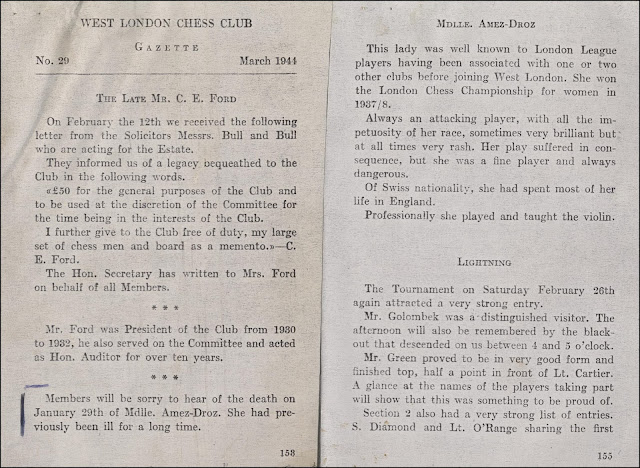 A brief notice of her death was reported in The British Chess Magazine for March 1944 on page 58.

The British Chess Magazine had previously included a game by Claire Amez-Droz in its February 1942 issue on page 32. 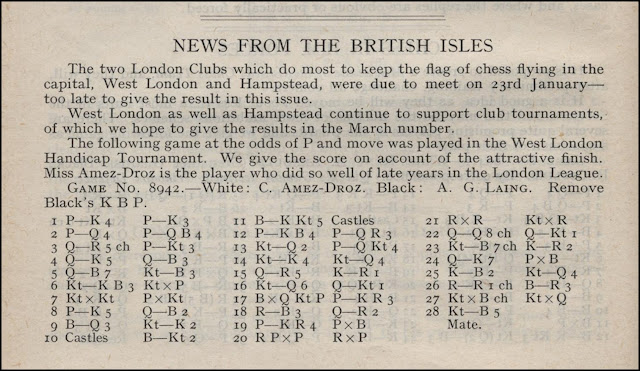 Incidentally, Réti's much acclaimed Masters of the Chess Board is one of a surprising number of well known chess books published posthumously, I will list several that I know of in a future article.

Posted by Michael Clapham at 17:32