A Review and Analysis of the Marshall-[Edward] Lasker Championship Match, and the Thirteen Games Played by Marshall at the Ninth American Chess Congress at Lake Hopatcong, N.Y., 1923. Also Chess Openings Condensed.

Most library catalogues list Edward Lasker as an additional author.

The match with Edward Lasker was played in 1923 at a number of venues including the Marshall Chess Club and University Club in New York, Chicago, Cleveland, Cincinnati, Baltimore, Washington, Long Island and finally back to the Marshall Chess Club. Marshall won with a score of 9½ - 8½. He also shared first place (with Abe Kupchik) in the ninth American Chess Congress at Lake Hopatcong in the same year.

Limited edition of 300 copies. A.J. Souweine states in his 1938 Catalogue, item 190, "we understand that no copies of this book were offered for sale, but were used as prizes for the victors pitted against Mr. Marshall in simultaneous play". However, Andy Soltis in Frank Marshall, United States Chess Champion, Jefferson 1994, says that copies were sold "for a hefty $5", on page 259.

Di Felice erroneously lists this in his Chess Competitions, item 2535.4, under the [Emanuel] Lasker-Marshall World Championship match of 1907.

Regarding the reference above to the 1907 World Championship chess match between Emanuel Lasker and Frank Marshall, it is surprising that there was no English language book published at the time on this event which was played in various cities in the United States. Perhaps there was insufficient interest after the American challenger lost the match 8-0 with 7 draws. However, Di Felice records one contemporary English Language item on this match as follows:

The 15 leaves covered the 15 games with annotations by Emanuel Lasker, and were issued for private circulation only, by Special Mail Service.

Pages 17 to 24 are in English, the rest of the text is in Norwegian.

This book has a diagram for every move of the crucial 18th round game won by Lasker. Around half the moves have notes by Dr. Lasker. 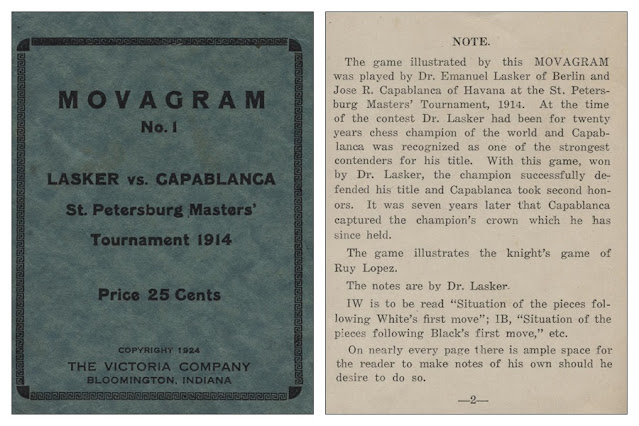 A Catalogue of Rare and Valuable works relating to the History and Theory of the Game of Chess, being the greater portion of the famous Library formed by J.W. Rimington Wilson, etc., Bernard Quaritch, London 1929. 96p. LN 99.

This is perhaps the most important of the book dealer's catalogues of the 20th century for chess literature.

The chess library of J.W. Rimington Wilson, who died in 1877, was thereafter maintained and added to by his son R.H. Rimington Wilson. After the latter's death, the library, which also included sporting and general books, was auctioned by Sotheby & Co. in London in February 1928. The 469 lots, consisting of around 2,300 books, realised approximately £10,000, although over half of this was for one item; a manuscript translation of Vida's Game of Chess said to be in the hand of Oliver Goldsmith*.

The London book dealing firm of Bernard Quaritch acquired the great majority of the lots at the Sotheby auction and subsequently offered the sporting and gaming books in their catalogue No. 415 issued in April 1928. The chess books were offered individually in their catalogue No. 428 issued in October 1929. A total of 1,657 items are listed, frequently with useful annotations.

Availability: Many libraries have a copy including KB, CPL, and London Library. 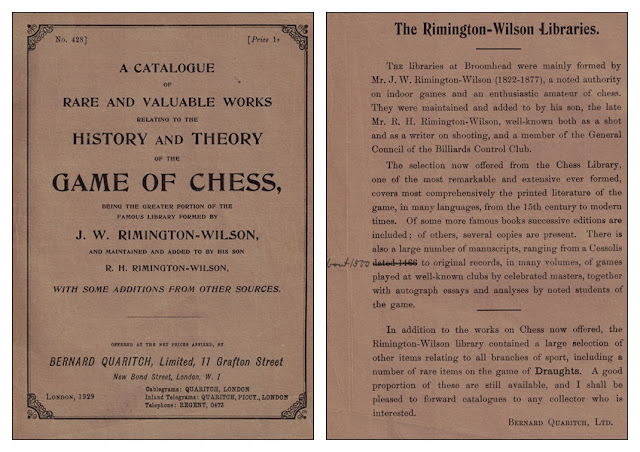 * For much more on the Rimington Wilson sale and the subsequent controversy surrounding the Oliver Goldsmith manuscript see the four articles in September 2012 and February 2013 on the Edmond Hoyle, Gent, blog by David Levy.

Some of the text is in German, English and French in parallel columns.

The book deals with pawn endgames with a mathematically precise basis. 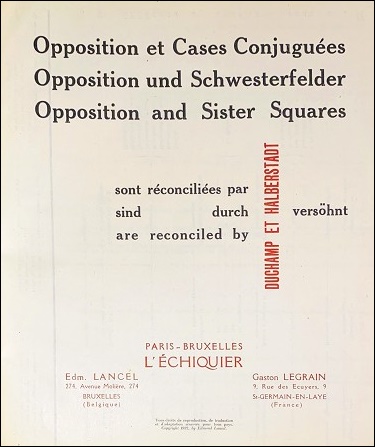 From the Foreword: "In placing this little volume before the public we hope to offer a Beginners Book of Chess that will in a clear and concise manner explain the elements of our Royal Game".

The book covers the movement of the pieces, notation, technical terms, relative value of the pieces and laws.

Availability: Many libraries have a copy including CPL, University of Liverpool. Digital editions available at  peterspioneers.com and hathitrust.org 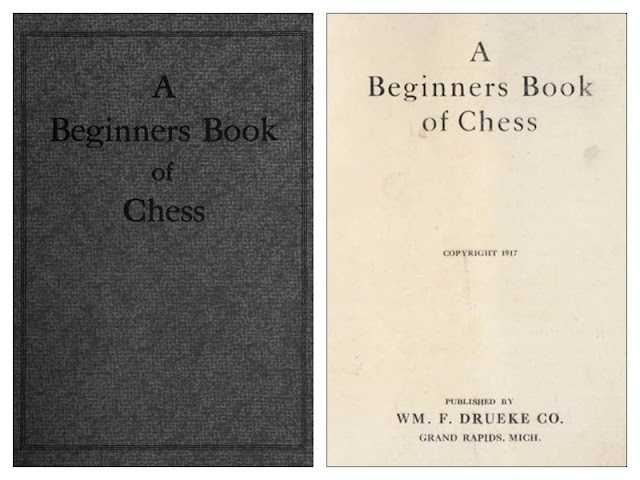 From the Foreword: "In compiling The Chess Primer we have endeavoured to produce a book that will be at once brief, readable and authoritative". Much of the content is similar to Drueke's A Beginners Book of Chess, with additional coverage of the openings, one illustrative game and one problem (composed by Wm. A. Shinkman).

Later editions were also published, and both A Beginners Book of Chess and Drueke's Chess Primer may have been issued to accompany the chess sets for which the Wm. F. Drueke company was famous for producing, including the unique octagonal sets illustrated in a 1940s edition of Drueke's Chess Primer below. 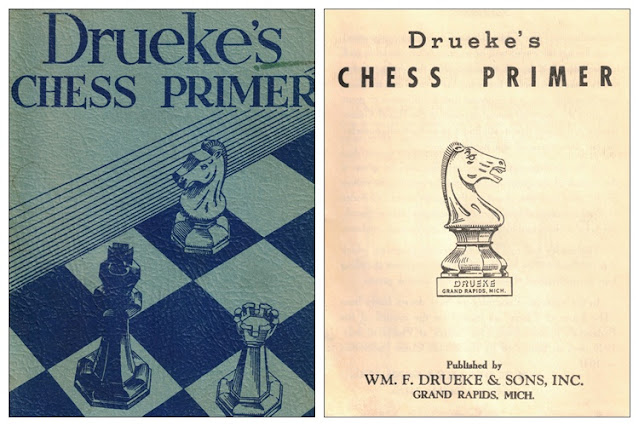 Text in English and Polish. 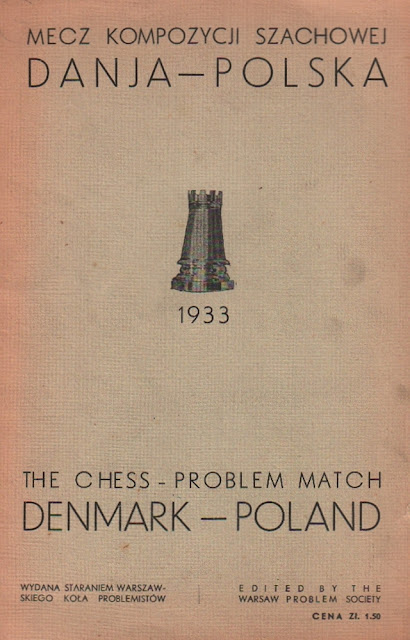 The Chess Key; A Key to the Chess Openings, by Reuben Fine and Dr. Max Euwe, Amsterdam 1937.

Chess volume 3, December 1937, page 145 describes this as "An amusing novelty. A rotating cardboard disc with 'windows' in which principal lines in 40 openings and variations are given, followed by a codified description of the resulting positions."

Availability: CPL. KB has Dutch and German editions of this item.

Posted by Michael Clapham at 12:58