An Inquiry into the Antient Greek Game Supposed to have been invented by Palamedes... by James Christie

One of the books sold for a high price at the recent Klittich-Pfankuch auction was the following:

An Inquiry into the Antient Greek Game supposed to have been invented by Palamedes, antecedent to the siege of Troy, by James Christie, London 1801. 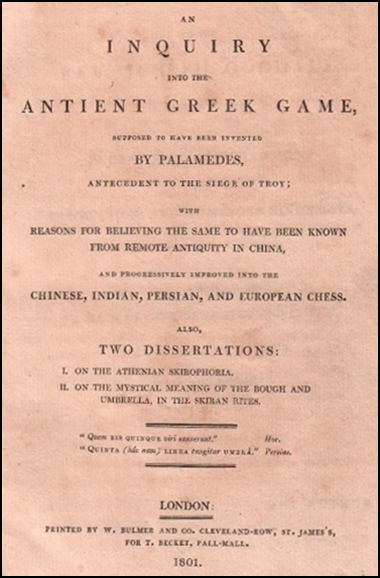 Antient is an obsolete spelling of ancient, although still apparently used in Freemasonry.

I do not have this book but digital editions are freely available on the internet.

Very briefly, the unnamed author, but known to be the celebrated auctioneer James Christie, proposes that the game of chess evolved from the Antient Greek Game of Pebbles, invented by Palamedes around the 12th century B.C., i.e. around 1,800 years before the game is now generally thought to have originated in India. 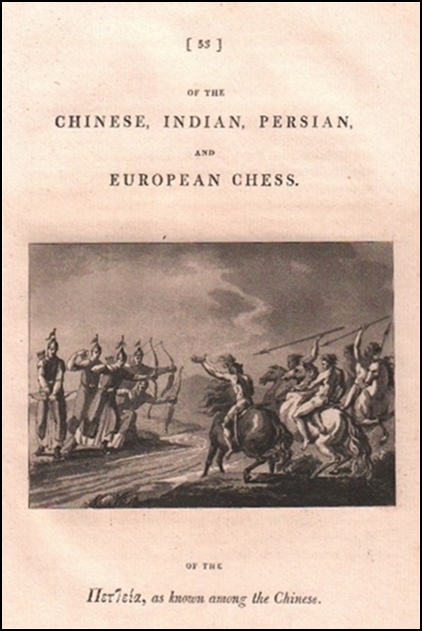 Duncan Forbes referred to Christie's conjectures in The History of Chess, London 1860 but declared "all this is sheer imagination" and that Christie's book was "more fanciful than sound".

In a long letter published in The Chess Player, by Kling and Horwitz, volume IV, Christie's book and ideas are discussed at length on pages 36 to 40, but again with much scepticism, the letter is signed B.S.* The book is also referred to on pages 12 to 18 of Amusements in Chess by Charles Tomlinson, London 1845.

In fairness, the author of An Inquiry into the Antient Greek Game... did expect his opinions to be controversial, but hoped that his book would encourage further investigations into the history of chess.

So the subject matter is as obsolete as the title, and the chief attraction of this book for collectors is its claimed rarity, which brings me to the main purpose of this article; to examine the claim that only 40 copies were printed. Booksellers, auctioneers and reference books have frequently stated that only 40 copies were printed, often citing early bibliographical works by Lowndes, Walker, Watt and Schmid for this information.

It seems that the limitation of 40 copies was first stated in The Bibliographer's Manual of English Literature by William Lowndes, London 1834 which I have not seen. This claim was dropped for the 1858 edition of Lowndes as my copy does not mention the limited print run of Christie's book, but states that it is "held in much esteem by the learned", and gives the prices of four copies sold at auction. 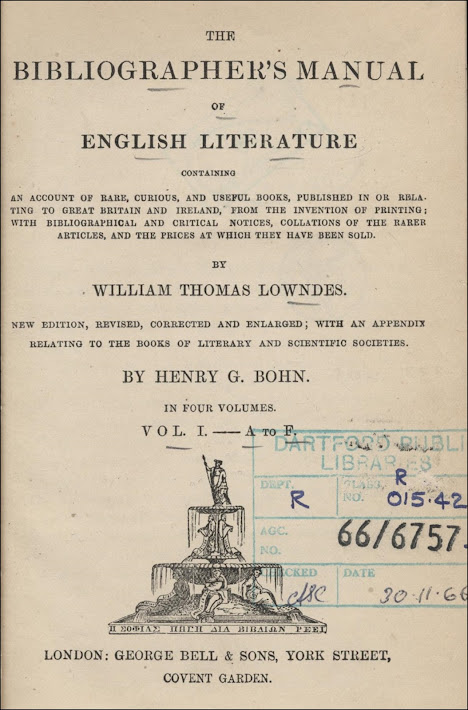 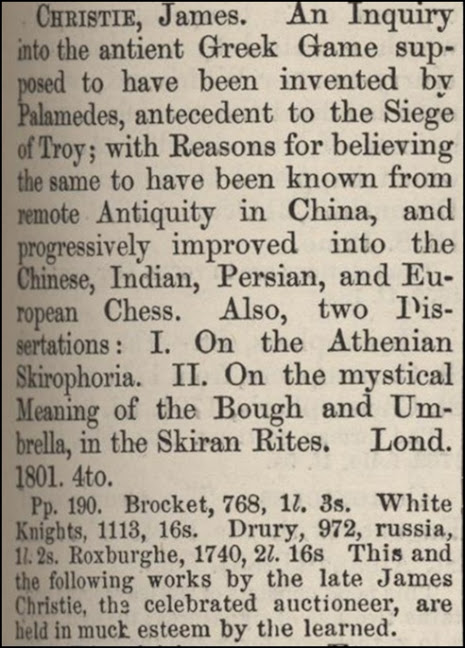 George Walker mentions this matter in his Bibliographical Catalogue of Printed Books, and Writers, on Chess in the appendix to The Philidorian, London 1838, thus:

"This book is somewhat rare, having been printed exclusively for private circulation, and the edition not exceeding forty copies. (See Lowndes Catalogue of Scarce English Books)" This is repeated in the Bibliographical Catalogue appended to A New Treatise on Chess by George Walker, third edition, London 1841, but nothing about the rarity of Christie's book is mentioned in the fourth edition of this work published in 1846 as The Art of Chess-Play.

Literatur des Schachspiels by Anton Schmid, Wien 1847, follows Lowndes and Walker by stating that only 40 copies were printed. Schmid also suggests (on page 145) that Christie's book was reprinted in 1802. However, no copies with that date are known. 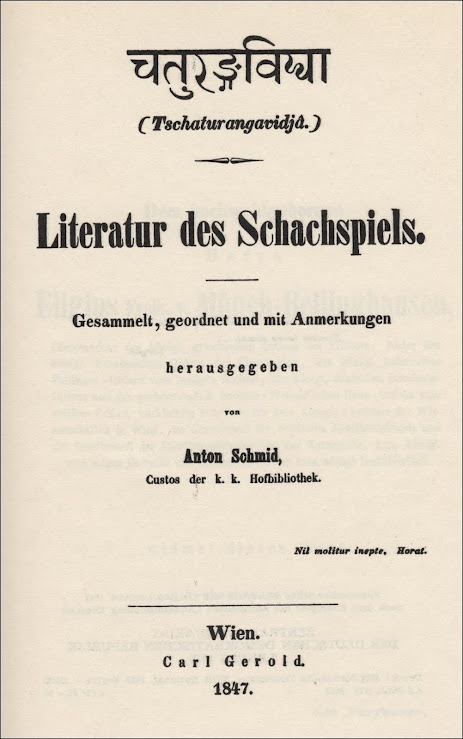 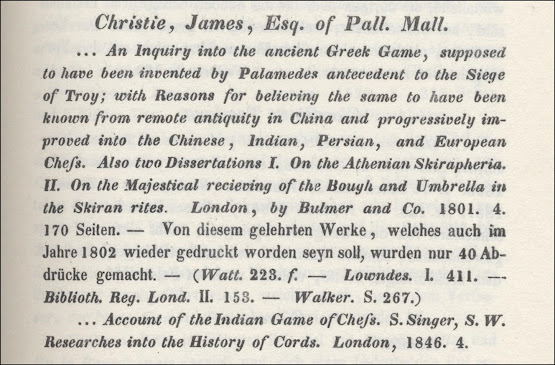 For a book that was published nearly 220 years ago it is highly likely that some copies have been lost over the years; and most of the surviving copies from such a small printing would, by now, have filtered down into the holdings of public and institutional libraries, or into the major private collections, leaving very few copies in general circulation.

Schaakbibliotheken (A Book about Collectors and Collections) by Dr. Meindert Neimeijer, Wassenaar 1948, gives details of many private chess libraries from the 19th and 20th centuries, often listing some of the scarcer books held. Christie's book appears 16 times in 15 of these libraries (Walker had two copies): 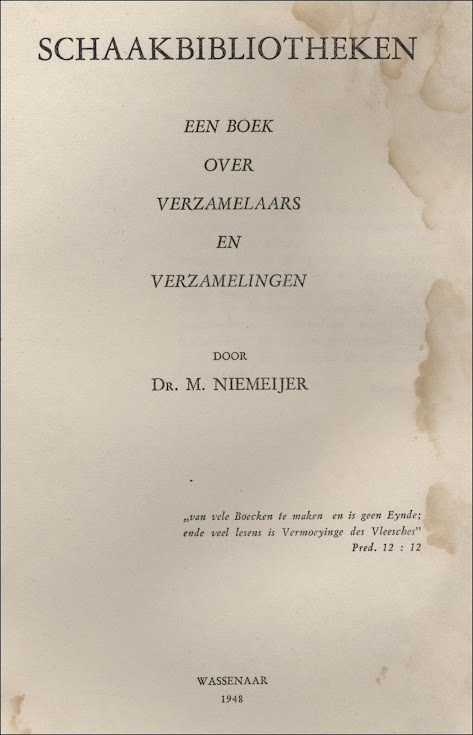 George Allen, H. MacDonald, E.B. Cook, Edwin Dodds, R. Franz, George B. Fraser, J.H. Ellis, Sir Frederic Madden, Dr M. Niemeijer, Numa Preti, Rosenthal of Frankfurt, V. Salimbeni/C.B. Vansittart, George Walker, C.W. Whitman, and Charles Willing. Furthermore, it is known that other libraries mentioned in Schaakbibliotheken held copies; such as von der Lasa (no. 547 in his Samlung von Schriften  über das Schachspiel), and you would expect J.W. Rimington Wilson to have had a copy; in fact he had three copies (probably the two from Walker and another copy). Here they are for sale on page 20 of Quaritch's catalogue for his sale of the Rimington Wilson collection, London 1929:

Other private collections not mentioned in Schaakbibliotheken also held copies, for example A.J. Souweine had a copy; item 152 in his 1938 catalogue.

WorldCat, the online union catalogue which itemizes the collections of nearly 18,000 libraries worldwide, locates 29 copies of An Inquiry into the Antient Greek Game... in university, institutional and public libraries. 11 of these are in USA, 9 in UK and 6 in the Netherlands. Even this list is not exhaustive, for example another copy is listed (twice) in Kieler Schachkatalog, the catalogue of the Wilhelm Massmann and Gerd Meyer collection in the Schleswig-Holsteinischen Landesbibliothek in Kiel.

The 11 copies in USA libraries together with further copies in private hands, such as David DeLucia, (see A Few Old Friends 1st edition page 62, 2nd edition page 92), and Jon Crumiller who has three copies! (see his website chessantique.com) indicates that more than a third of the original printing, and an even larger share of what survives of a book originally intended for private circulation in England, has ended up in America; this seems incredible.

Obviously some copies of this book have passed from collector to collector, and from dispersed collections into institutional libraries, but the known location of so many copies implies that very few examples should come on to the open market. Yet this book regularly appears in book dealers catalogues and at auction sales.

Copies have been sold at the following auctions in recent years: 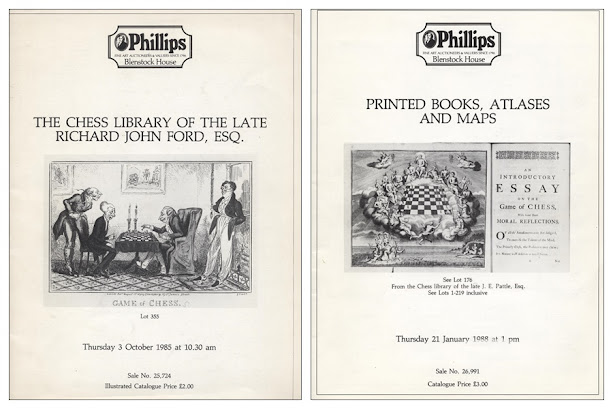 Chess book dealers Fred Wilson, Roger Treglown and others have also seen copies passing through their hands. Fred Wilson was also doubtful about the 40 copies claim; here is the Christie entry in his Chess Literature Catalogue Number Fourteen:

There are no doubt other sales that I am not aware of, and it is also possible that the same book turns up in different sales.

All in all, the known location of so many copies together with the frequency with which further copies come on to the market, make it very improbable that only 40 copies of this book were printed.

* These letters by B.S. from The Chess Player in 1853 were reprinted and distributed by Ken Whyld as part of his annual Christmas Gift series in 1989. Ken Whyld's collected Christmas Series was published in book form by Olomouc in 2006 with the cover title Chess Christmas.

Posted by Michael Clapham at 16:14