Meanwhile back in Moscow... 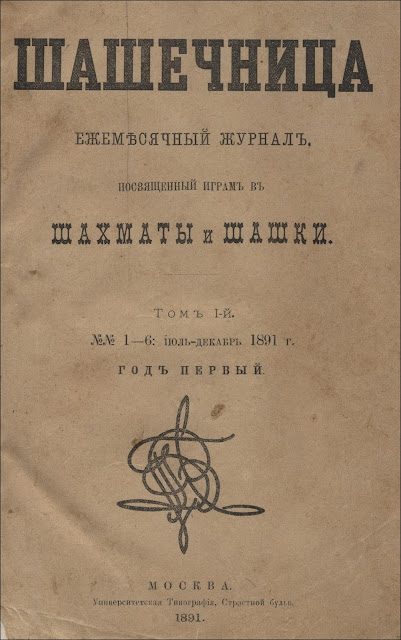 Shashechnitsa was launched in July 1891, six months after the St Petersburg magazine Shakmatnyĭ Zhurnal had commenced, and for the first time, Russia had two contemporary chess journals. Although titled Shashechnitsa (Draughtsplayer), the magazine was conceived as a publication equally devoted to chess and draughts. However, chess predominated from the outset; the first issue included 38 pages of chess and 10 pages of draughts.


The magazine's title proved misleading to the public and after six months the journal was renamed Shakhmatnoe Obozrenie (Chess Review) and continued with the same numbering - see next item. 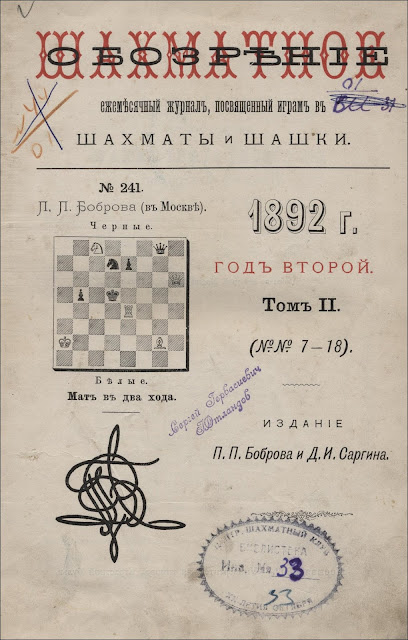 As the full title indicates, this continued to be dedicated to both chess and draughts, with articles, games, problems, obituaries, news and reviews on both games included.  The magazine contained contributions from many prominent chess writers from home and abroad. There were theoretical articles by S. Alapin, A. Goncharov, I. Savenkov, A. Hardin, M. Shabelsky, etc., and M. Gonyaev wrote a number of historical essays.  The editors arranged competitions for both composing and solving chess problems. 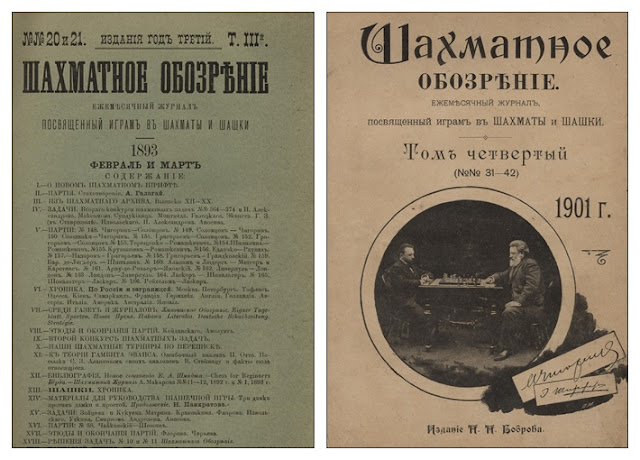 There were long gaps in publication from 1894 to 1900, and 1905 to 1908, many issues were double, treble and even quadruple numbers, and the promised final two issues for 1904 (77 and 78) never appeared. However, during the periods 1903 to 1904 and 1909 to 1910 this was the only chess periodical in Russia. This was fortunate as the magazine was able to give wide coverage to the important 3rd All Russian Tournament held in Kiev in 1903, won by Chigorin, and the outstanding Chigorin Memorial Tournament held in St. Petersburg in 1909 - equal first Emanuel Lasker and Akiba Rubinstein.

The editors organised a number of correspondence tournaments, and the January 1904 issue includes details of Alexander Alekhine's participation in these events as a 10 and 11-year-old. 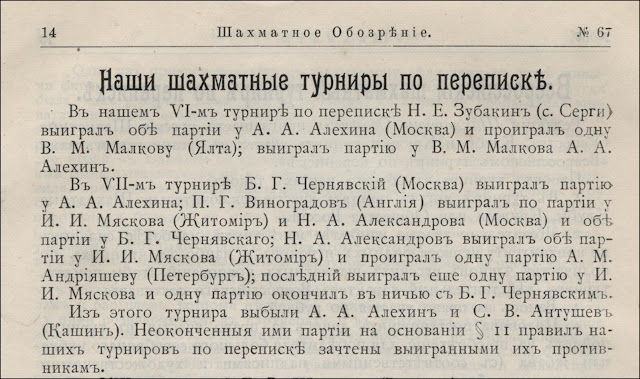 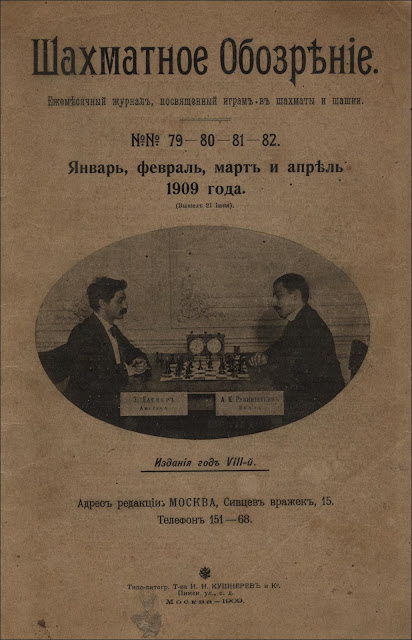 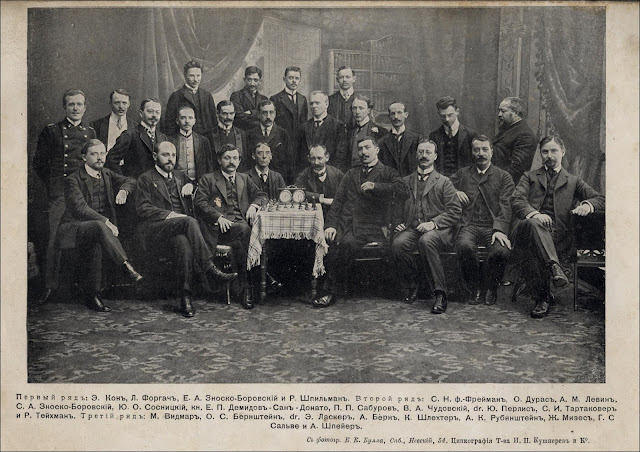 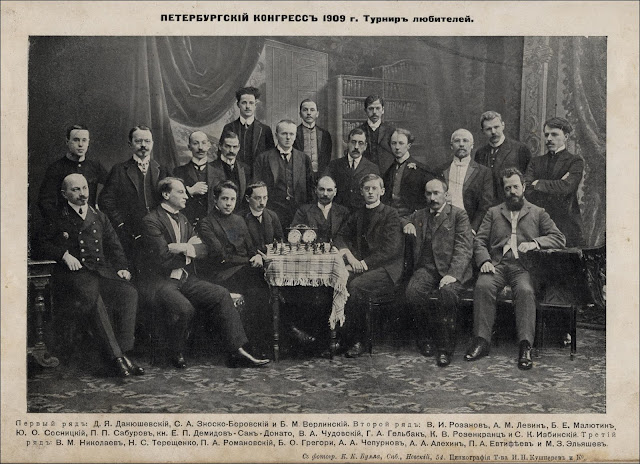 Several people are in both photographs.

The volume for 1909 also includes an enormous folding leaf, with seven folds, stretching to nearly a metre in length. This gives the results of the games between 34 masters up to 1909.  The overall results were as follows: 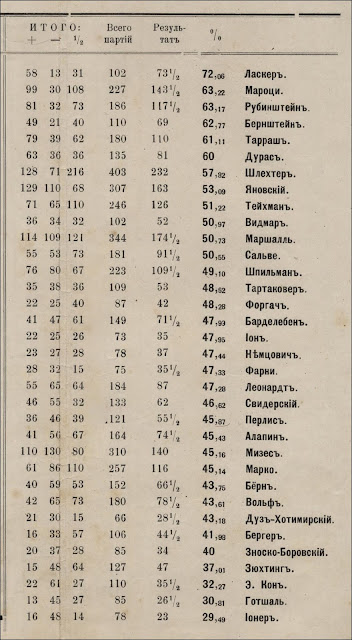 Following the death of Chigorin in 1908, Znosko-Borovsky had picked up the baton of his campaign for Russian chess unity, and published a Draft Charter of All-Russian Chess and a follow-up article: On the question of the organisation of All-Russian Chess Union, in the 1909 magazine.

The 1909 volume included a list of subscribers with around 300 names.

This fortnightly magazine appeared for 12 issues between January and July 1894. Editors noted in various sources include the publisher A. S. Suvorin, M. P. Fedorov and Mikhail Chigorin. Chigorin actually contributed most of the content and M. Shabelsky also took an active part in the magazine.

In addition to the usual material, the matches between Chigorin and Lasker in 1893, and Lasker and Steinitz in 1894 were covered.  The magazine commenced the publication of all the games between Labourdonnais and McDonnell, but only 36 of these "brilliant rejoicing inspirations of the past" had been printed before the journal closed for financial reasons. Among the books reviewed were the works of A. Binet, who explored blindfold play from a psychological viewpoint, - see LN 3406 and LN 3407.

Published in Warsaw, Poland, which, at the time was partitioned by Russia, this was the first chess periodical in the Polish language. The magazine concentrated on chess life in Poland and included theoretical and historical articles, games, problems and also literary items including poetry. Draughts players were also catered for.

This, the first chess periodical published in the Motherland outside of St. Petersburg and Moscow, was launched with the aim of informing chess amateurs about the latest events in the chess world, particularly in Russia. The magazine lasted for just two issues - July and August 1911, before ceasing due to a lack of subscribers, and of suitable contributions from prominent chess players.  Capablanca was featured in the first issue.

As the title states, this was the first Jewish chess newspaper and just three fortnightly issues were published in partitioned Poland in October 1913. 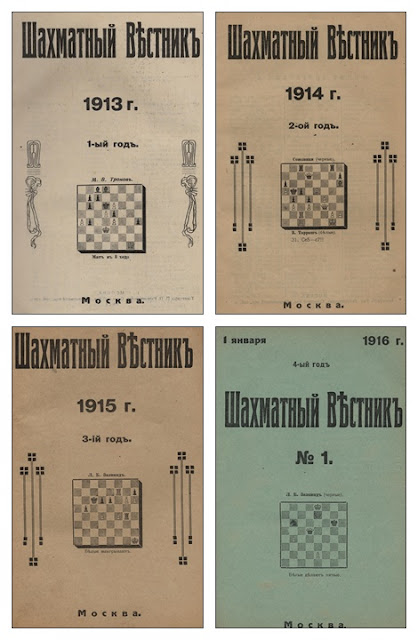 Ostensibly a fortnightly magazine but many issues were double numbers. Alexander Alekhine's brother Alexey was the publisher and also conducted the correspondence tournaments. The editorial staff included O. S. Bernstein and D. N. Pavlov (Games), L. B. Zalkind and V. Platov (compositions), K. I. Isakov (Russian and foreign news) and A. S. Selevnev. Alexander Alekhine also contributed and features frequently in the magazine.

The International Grandmaster Tournament at St. Petersburg in 1914 naturally featured prominently, taking up most of the space in the 1st May and 15th May 1914 magazines with further games and coverage in later issues. 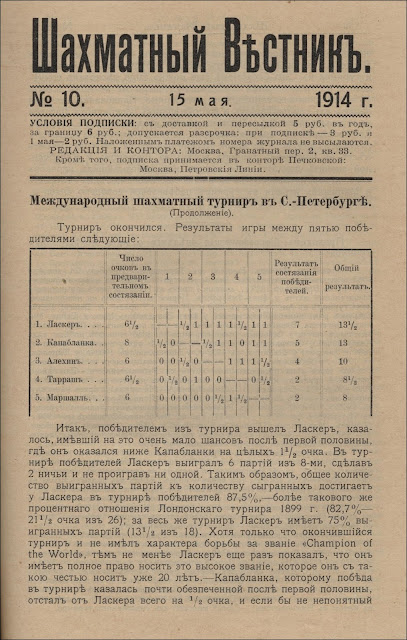 The magazine did much to popularise chess in Russia and took an active role in the formation of the All Russian Chess Union in 1914. The circulation reached 1,000, but high publishing costs and the onset of the First World War forced the closure in October 1916.

This was the final chess periodical to be published in Russia before the Great October Socialist Revolution in 1917.

The newly formed All Russian Chess Union issued two bulletins on its progress and activities, in 1914 and 1916, containing information on the emergence of the Union, statutes, program of activities, list of members etc. 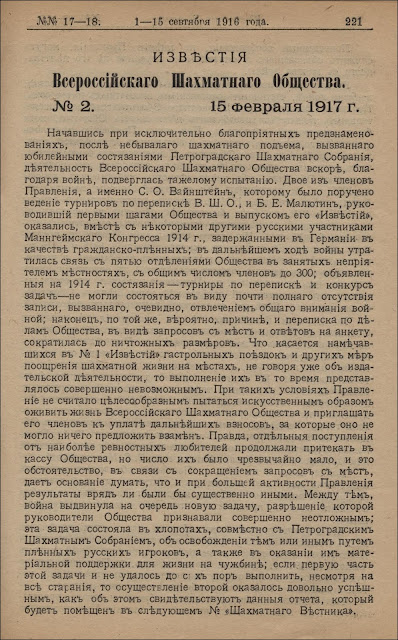 The Revolution in 1917, together with the first World War, followed by civil disturbances, brought organised chess activities in Russia almost to a standstill, and it was five years before the publication of chess periodicals recommenced in 1921.

Posted by Michael Clapham at 16:47