British Chess Problem Books published up to 1949, by John Beasley

British chess problem books published up to 1949, by John Beasley is a little known chess bibliography, first published in August 1996. A second edition (revised and enlarged) was issued in June 1997. John Beasley, the English problemist and author, was librarian and archivist of the British Chess Problem Society at the time these were published. 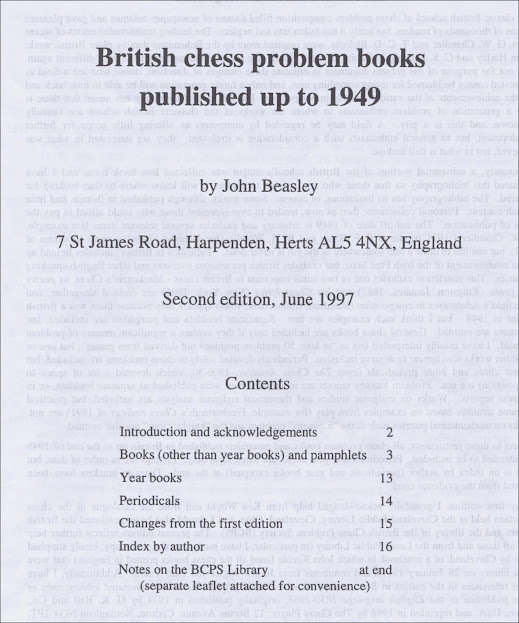 The first edition had been very briefly reviewed in The Problemist for November 1996, page 311:

The 16 page second edition was briefly reviewed in The Problemist for July 1997, page 179: 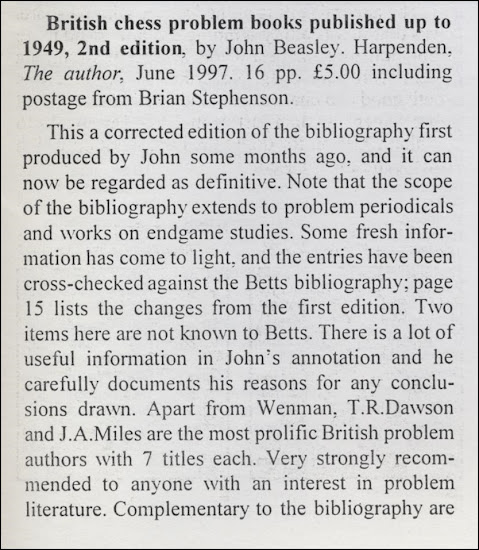 The present article reviews the second edition, a copy of which was kindly made available to me by Tony Peterson of chessbooks.co.uk.

John Beasley explains in his thoughtful Introduction that a substantial portion of the classic British school of chess problem composition, which filled many newspaper columns, has subsequently been collected and published in book form. His bibliography aims to bring together details of all chess problem books (including general chess books with a significant amount of problem content), periodicals devoted to chess problems, problem tourney reports and works on endgame studies, published in Britain up to 1949. The pre-1950 cut off date was arbitrary, but, as the author remarks, "one has to draw a line somewhere or the job is never done."

Sources included Betts' Bibliography, Cleveland Public Library, British Library and the library of the British Chess Problem Society; but there is no mention of the van der Linde-Niemeijeriana collection. Particular use was made of a notebook belonging to John Keeble, the renowned problemist, author and chronicler, in which he had noted all chess books printed in England that were in his collection in January 1911. Keeble's notebook is now in Cleveland but Beasley's bibliography has four additional pages of Notes on John Keeble's Chess Problem book list, with details of the works listed in the notebook.  Beasley also received considerable assistance from Ken Whyld and Michael McDowell in compiling this work.

Beasley's bibliography covers both chess problems and end-game studies; in 1939 J. Selman Jr. had proposed making a bibliography of end-game literature in a letter to the New York chess book collector and dealer A. J. Souweine, however this does not appear to have come to fruition. 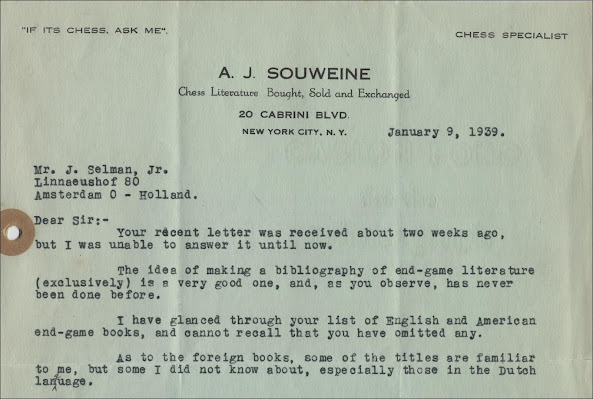 A useful Bibliographie der Endspielbücher listing nearly 300 works on the end-game, in many languages, is included in the dual language book 365 Ausgewählte Endspiele / 365 Selected Endings by Norman Whitaker and Glenn Hartles, published in Heidelberg in 1960. 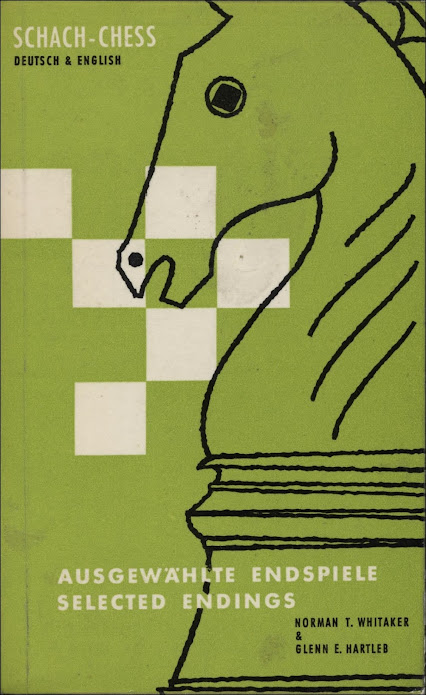 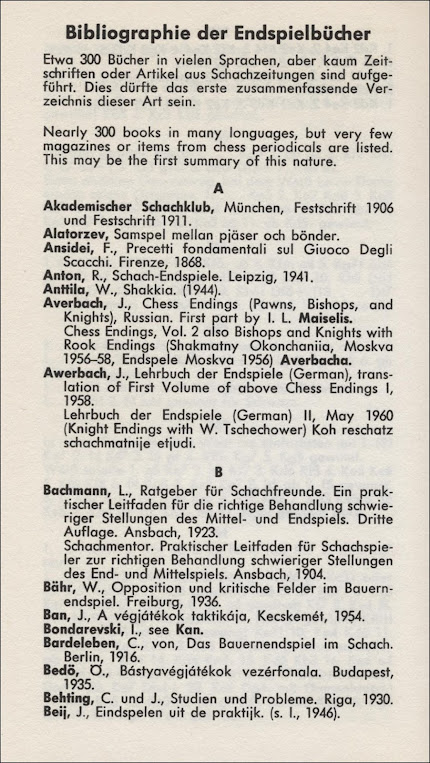 Beasley's compilation, which includes works published in Britain only, has 179 entries listing around 200 books and periodicals, and each entry is accompanied by a useful commentary. Some of the many illuminating comments follow:

1846. Alexandre A. The Beauties of Chess - This massive collection of 2,000 problems was notoriously careless (Beasley), but a paper prepared by Oskar Korschelt and published in Deutsche Schachblatter in 1913, corrects many of the errors and gives the sources of most of the problems. This essential paper is included in the Olms reprint of Alexandre.

1855. Miles J. A. A Collection of Chess Problems - This rare first collection of problems by John Miles escaped Betts; T. R. Dawson did not have a copy although it was in Keeble's collection. 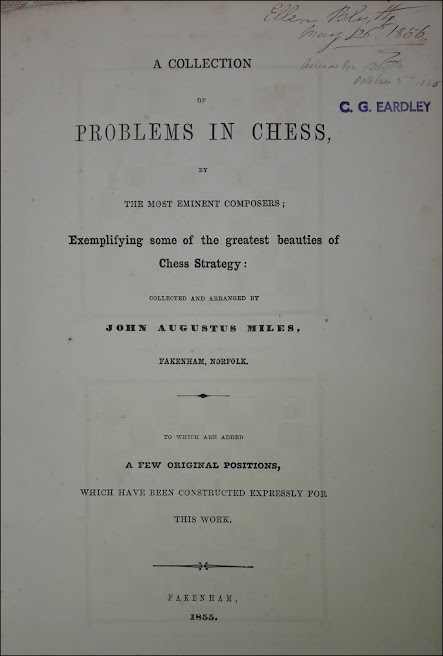 1882 Miles J. A. Poems and Chess Problems - Some copies have a corrected frontispiece problem pasted over the original.

1891 Reynolds B. How to solve a Chess Problem - This is book 9 in Morgan's Shilling Chess Library series (Betts 30-7), but was almost certainly never published. Books 8 and 10 in the series were published in 1891 and 1892 but in a list dated 1899 Morgan still described the Reynolds book as "in press". Betts says "not examined", this is not in Keeble's notebook, and the bound volume of Morgan's Shilling Chess Library, which was held by the British Museum but now destroyed, was catalogued as "wanting number 9".

1908 Bristow H. Chess Miniatures. According to the Cleveland catalogue about 20 copies had their titles altered in the author's hand to Chess Fancies. Beasley also records an edition dated 1899 from information in Keeble's Notebook, this is not listed in Betts. This book was briefly reviewed by Philip H. Williams on page 378 of The Chess Amateur, September 1908, without any mention of an earlier printing.

1910 Keeble J. H. Vive la Beauté - Keeble's 1911 notebook includes information on his secretive publication - a tinted version of The Caduceus, which was not to be revealed until after the author's death (in 1939) - see The British Chess Magazine 1939 pages 185 to 187. Keeble's notes differ slightly from the information later included in David DeLucia's A Few Old Friends, and British Chess Literature to 1914 by Timothy Harding. In particular, Keeble states that 11 pink and 12 lemon copies were printed, but 1 pink copy and 2 lemon copies were bound up with the title page from The Caduceus and in similar binding.

The first book listed in Beasley's bibliography is Sarratt's A Treatise on the Game of Chess published in 1808. This, perhaps surprisingly late date for a first British book with a substantial number of chess problems, is in line with the findings reported in the Questions and Answers section of The Chess Amateur for July 1908, page 294, that no chess problems composed by an Englishman before 1800 could be traced. 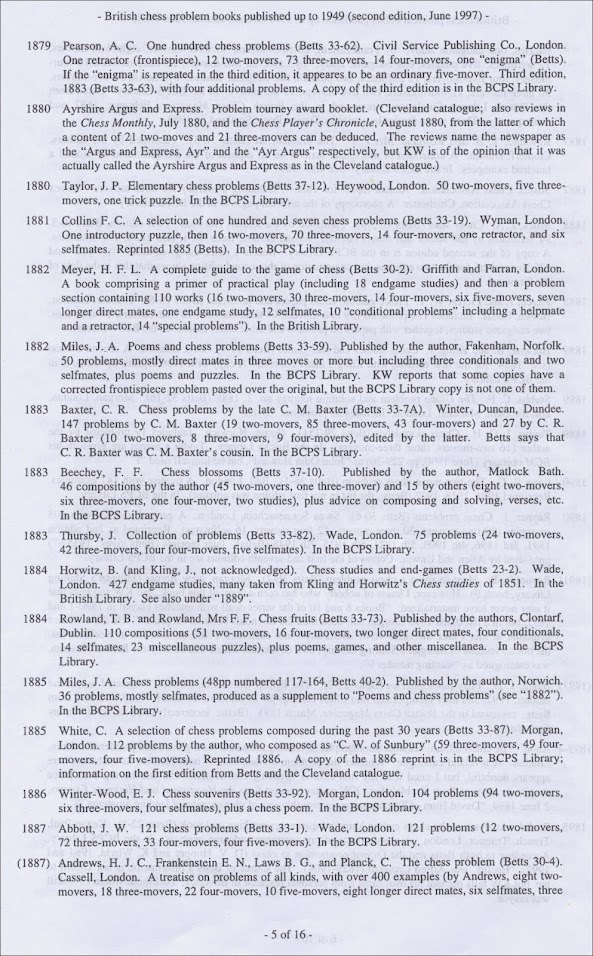 Chess problem books flourished in the second half of the nineteenth century and easily outnumbered other categories of chess books such as general treatises, tournament books or games collections. Beasley included general chess books in his bibliography "only if they contain a significant amount of problem material... usually at least 50 problem positions not derived from games". 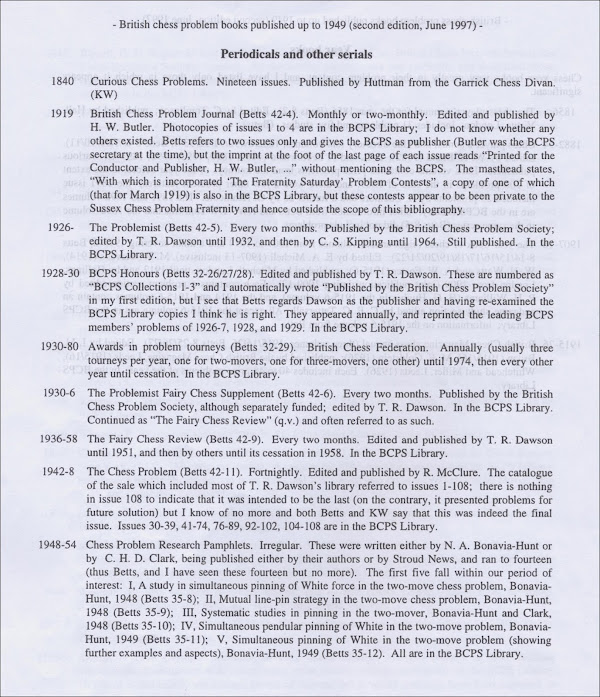 Beasley also includes a page of Supplementary notes, mostly from information supplied by Michael McDowell and Ken Whyld. Mr Blackburne's Games at Chess, 1899, with 28 problems, is added to the bibliography and a few minor corrections are made. Among these notes is a comment regarding F. R. Gittins' Chess Bouquet of 1897. "Also I recall seeing a reference to a supplement....Presumably this never saw the light of day". However, several parts of a supplementary Chess Bouquet did appear and I will write about these separately.

Several rare and obscure publications are listed in Beasley's bibliography including the following:

1893-94    The Chess Album, "cabinet photographs of leading amateurs, with games and problems" by David Hum, London.

1902     A selection from the original two-move problems of R. Forde, published by the author. This contains 75 blank pages, 18 diagrammed problems and solutions.

1907    Notes on two-move chess problems, and how to solve them, by P. H. Williams, Stroud. A Braille edition was published by the National Institute for the Blind.

1939     When doctors disagree, by H. D'O. Bernard, Stroud.  This is the text of a lecture given to the British Chess Problem Society in February 1934.

The bibliography also contains a page detailing changes from the first edition and another page of notes on the Library of the British Chess Problem Society.

There are a number of British publications with significant chess problem content not listed in John Beasley's bibliography and I will list these in a later article.

Many thanks to John Beasley and his contributors for the information reproduced above and thanks to Owen Hindle for the image of A Collection of Problems in Chess, by J A Miles, 1855.

Posted by Michael Clapham at 23:17